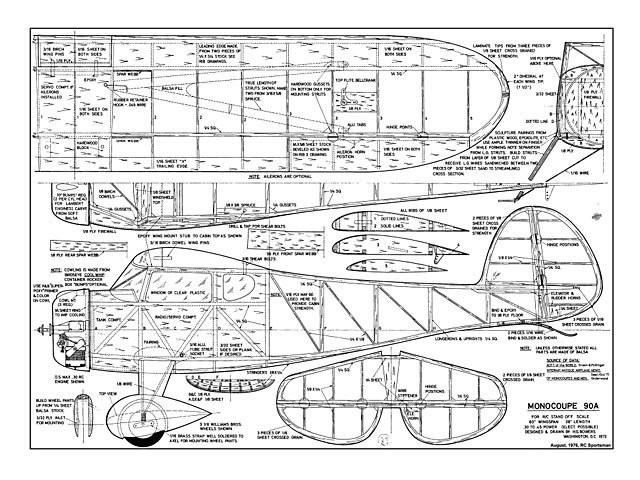 Quote: "This 60 in span sport scale model of the Monocoupe 90A is by Hurst Bowers and was published in the August, 1976, issue of R/C Sportsman magazine. He admits to being fascinated with Monocoupes since seeing Annette Gipson occasionally fly one in to his local Boyston, Georgia, grass airfield during the 1930s."

One of my most vivid memories of aviation's Golden Age focuses on a beautiful little sod field near Royston, Georgia in the 1930s. The airport was complete with rotating beacon, wind sock, white rail fence, and yellow boundary markets. With its close proximity to Atlanta, Greenville and Spartanburg, South Carolina, it was a mecca for barnstormers of the day. Rarely a Sunday went by without a Jenny, Waco, Curtiss Robin, Travelair, or Aristocrat dropping in to hop passengers for two dollars a ride. The 'lighting ground,' as many of our local citizens referred to it, was a comfortable bicycle ride from town and a delightful place to spend your hard earned allowance.

From time to time, we would find a beautiful little red cabin monoplane at the field, with its equally attractive pilot, Miss Annette Gipson, clad in a matching red flying suit. The pair proved to be a major attraction, particularly in the performance of aerobatics; and ever since, the names Monocoupe and Annette Gipson have been synonymous with things of beauty and grace.

Needless to say, the Monocoupe became a favorite with the few model builders in the community during that depression era. All of us went through the old Comet, Megow, Peerless, and Star kits as rapidly as our meager earnings would allow. In fact, it has remained one of my very special airplanes for some forty years, so you can readily understand why I chose it for a Stand-Off Scale model.

The drawings were developed from several old kit plans, from data in Green and Pollingers' The Aircraft of the World, from John Underwoods' Of Monocoupes and Men, from Antique Airplane News, and from an old 90A recently purchased by Ernie Greene and located in a hanger at the Frederick, Maryland airport.

I built the structure, and it remained in Joe Taylors' McLean, Virginia basement shop while I served a tour of duty in Saigon. Upon returning, I was in such a hurry to finish it that I covered it with Silray, rather than wait for the hobby shop to receive its next order of red silk. This was a mistake for, after covering and clear doping the model, I hung it near my furnace and the tail structure warped very badly. When I saw it I was sick, so I postponed finishing it until a new tail could be built. And, thus, we enter into the second part of the story.

Mr 'Getting Started in R/C, Captain Jim McNerney USN, is a friend and neighbor of mine. One night, he was sitting here in my shop and noticed a little rubber-powered Monocoupe hanging on the wall. He commented that it had always been one of his favorite airplanes. I retrieved the RC Monocoupe from another room, warped tail and all, and gave it to him. Jim took it and my pencil drawings home and went right to work to put things straight. He built a new tail, replaced longerons which were badly drawn from the heat, dope, and shrinking and covered these members with silk.

He did a beautiful job, and was just ready to start turning out a cowling on a lathe for a male mold to form one from fiberglass when he discovered Birdseye frozen Cool Whip, or rather its container. The plastic bowl just fit when cut down and opened at the bottom. But how about doping - would it take dope? K&B SuperPoxy solved this problem. Jim shot the cowl with primer. He then used red SuperPoxy and it was beautiful. With these problems resolved, he then finished the model in red with standard Monocoupe trim in white.

Now we were ready for flying. Bob Munn, a mutual friend with the State Department who recently introduced radio control aeromodeling in Turkey, and I accompanied Jim and the Monocoupe out to Arcola, the Northern Virginia Radio Control Club's leased flying field. The weather was good and the OS Max 30 ran well, however some idling adjustment was necessary. After a couple of takeoff attempts (the grass was a little high for the wheel pants) the bird became airborne and, in flight, it was a thing of beauty.

Something wasn't exactly right, however. Controls were standard, with elevator and aileron on the right stick and throttle and rudder on the left. In attempting a standard turn, the response was very slow and sluggish, and Jim soon found out that this is a rudder airplane. By leading slightly with rudder, or by coordinating both rudder and aileron turns were perfect. Additionally, he found that for standard sport flying he really didn't need any aileron - the Monocoupe handled beautifully on rudder and elevator only. He reversed the plugs on the receiver, thus putting rudder and elevator on the right stick and throttle and aileron on the left - now he has the best of two worlds. Ailerons are there for aerobatics, but no worry about coordinating controls for normal flying. The airplane is fast and clean and glides like a dream. Absolutely no problem was encountered during dead stick landings.

One of the current airline commercials plugged these days is: Getting there is half the fun. This applies to other things as well, including building the Monocoupe. Construction is simple and reminiscent of the old rubber and free flight days. The same basic skills and techniques are used. The fuselage is built a side at a time directly on the plans. Wet the 1/4 in square balsa longerons in hot water and they will negotiate those curves like a wet noodle. I use titebond, but any good glue may be used. With these curves, the uprights and diagonals are most important, as they carry heavy loads. Join the sides when dry and you will find that you have a strong, rigid, yet very light structure.

Now add the formers, stringers, and bind in the 1/8 steel wire landing gear struts as shown on the plans - add the side, nose, and bottom planking and the per-sonality of the Monocoupe begins to appear. At this point add the fuel tank, engine and servo mounts, tail skid, and you are ready to set this assembly aside and start building the wing or tail, as the mood strikes you.

The tail is quite simple and little need be said about it except that, if you desire, the curved edges may be made from 1/16 x 1/4 in balsa laminations. I frequently use this method, however, I have shown the cut-out type edges on the plan. Basically, be sure of an accurate and strong structure, so as to prevent warping. It is important that a wire stiffener be inserted into the center section of the elevator spar, as this member carries substantial control loads.

The wings are straightforward and, if ailerons are not installed, they are most simple and quickly built. The heavy leading edge, with top and bottom sheeting to the forward spars, is very strong and rugged, as is the V-shaped trailing edge. The same comments apply to the wing tips as to the curved tailplane edges. The method is a matter of choice. Be sure to block up the tips 3/8 in while under construction and insure a snug, well glued joint at the spar web points. They carry heavy flight loads, and are of paramount importance to a true, strong structure.

As for details such as struts, landing gear fairings, wheel pants, and cowling - they are adequately explained on the plans and should present no problems whatsoever.

You may cover your model with silk, MonoKote, or whatever material you find most convenient. Don't store a heavily doped silk or Silray-covered model in the furnace room. For color and trim details, any of the data sources I named may be used. These will also serve as proof of scale at Stand-Off competitions.

The installation of your radio components is conventional and left to the discretion of the builder. Insure, however, that the Center of Gravity is located at a point one-third of the MAC (mean aerodynamic chord) for proper balance. Carefully check out the equipment for proper operation. Control action must be smooth and compatible with the desired signal induced at the stick.

If you have now finished eating all the Cool Whip from your cowling, you are ready to go flying. You are in for many pleasant hours with your Monocoupe, and it should bring in lots of trophies." 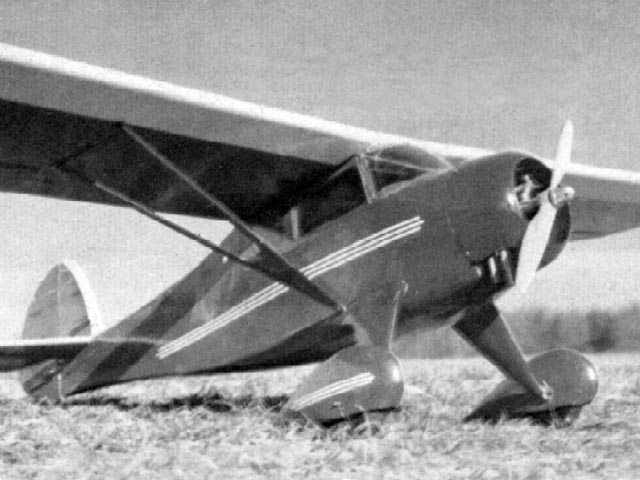 I believe it may very well be Annette Gipson - with a "P" - not Gibson. See https://ladieslovetaildraggers.com/aviatrix-history-4/
David Wood - 16/03/2020
Thanks. Fixed this now. Presumably this is a misprint that got past the magazine editor. I did a quick Google, and there is a pic of the Monocoupe 90A (NC11792) owned by Annette Gipson at http://gobinkley.com/nc11792/
SteveWMD - 16/03/2020
Looking again, to be honest, I have no idea which is the correct spelling. Both show up in searches. Both of the above mentioned links are to sites run by enthusiasts (but not by historians). Does anyone have an authoritative answer?
SteveWMD - 16/03/2020
Gipson, see https://cgaviationhistory.org/chapter-6-famous-aviators-of-floyd-bennett-field/
Pit - 16/03/2020
Many thanks. Have added a photo, thanks to Pit, showing an original ticket which is quote: "Good for One Flight with Annette Gipson", I guess that settles it.
SteveWMD - 16/03/2020
Greetings, I am very impressed by the number and variety of designs by Col. Bowers you've published recently. They have an elegance and diversity that I find charming. I hope there are many more to come.
James Hickman - 17/03/2020
Add a comment