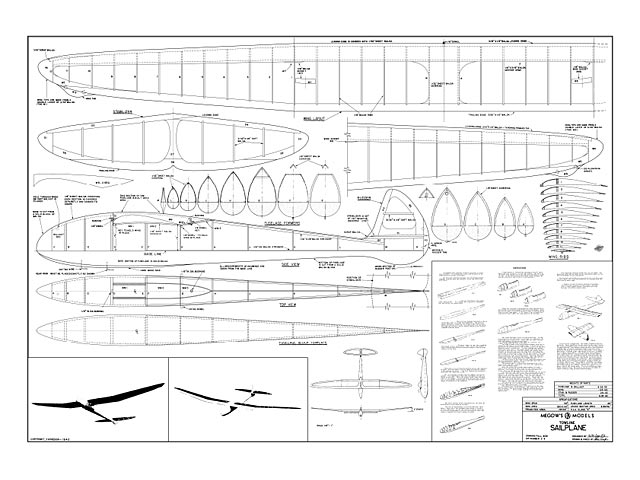 Quote: "In building this sailplane it will be necessary to work very carefully. It is important to have all the parts of the model made accurately to the plan.

We will start with the fuselage. Cut the fuselage block template from the plan and cement it to the top side of the body block. Now cut the block to this shape with a sharp knife. If a coping saw or jig saw is available this job will be very much easier.

The next step, shaping the block as shown in the side view, is a little more difficult. The most ac-curate method is to measure the height of the block at the different stations on the side view and mark it on the block. Through these points a line is drawn and the excess wood is trimmed from the block.

The next step is an easy one, rounding the bottom corners of the block. They can be cut roughly with a sharp knife and then sanded to shape as shown in the stations on the plan.

The rear fuselage stringer and tail support can now be added. It is important to have the tail support exactly as shown on the plan. Check the height of the front and back edges of the support, measuring from the base line, and be sure it corresponds with the plan as this determines the a-mount of incidence in the stabilizer.

The three sections of the wing mount are cut from the printed pieces and cemented in place. The rear of the fuselage is covered with 1/32 sheet balsa. Each side of the fuselage from station P back is covered separately. At the tail section it will be necessary to curve the wood slightly to fit the tail support. After the cement is applied the wood is pinned in place.

From station E forward the covering is of 1/8 sheet balsa and each section is covered individually. The grain of the balsa wood should run in the same direction,that is, front to rear. If the wood is too stiff to bend easily, dampen the outside with water and it will curl into position.

When the covering is completed the front and bottom of the fuselage is sanded to shape with coarse sand paper. After the correct shape is obtained the entire body is sanded smooth with very fine sand paper. A 1/8 dowel is cut to length and cemented in place under the wing mount in the fuselage.

The entire fuselage is now covered with tissue. It will be necessary to cut the tissue several times to conform to the compound curves of the nose. After this, two coats of clear dope will finish it for the present time.

The tail construction is very easy, the stabilizer and rudder being made directly on the plan.

The three parts of the wing are now cemented together and the two wing gussets added. Be sure both sides have the cor-rect dihedral before allowing to dry. The leading edge is covered with three pieces of 1/32 balsa on the top only. The pieces are cut to fit, cemented in place, and sanded to shape. Since the airfoil has a slight undercamber it is advi-able to vover the bottom first to be sure the tissue sticks to each rib. The wing is covered with six separate pieces of tissue, three on the top and three on the bottom.

The tail may now be cemented to the fuselage and the rud-der tab added. Be very careful in cementing the tail in place, it is very important to have it straight. The top part of the fuselage is now built on to the wing. Pin the wing in place on the fuselage and cement the two for-mers in place. Cut the two sides from the printed pieces and cement in place. After a light sanding it is covered with white tissue. The remaining fuselage details may now be added. The hardwood skid and tow hooks can be cemented in place as can the two bushings on the wing mount.

The next step is important. The model should be lined up perfectly. There should not be any warps in the wing. Correct any warps by holding wing over hot stove and twisting back to straight position. Now balance model about 1/3 back from the leading edge of wing by applying weight to the nose of the model in the form of of BB shot or lead pellets.

Give model a hand glide. If model stalls, add ballast to the nose. If model dives remove some ballast. After model has been adjusted to take a smooth glide try towing with a short tow line (about 30 or 40 ft. long) Use forward tow hook. Run the glider up as you would run up a kite. Be careful not to run too fast. If model starts to bank on either side release tow lines immediately to avoid any danger of a crack up. Make adjustments using rudder and wing tabs until model will go straight up overhead.

Now try a towline of 200 ft. If model acts good, try using a 500 ft line. Using 500 ft of tow line you should get flights from 5 to 15 minutes consistently. Use heavy cotton or silk thread for tow line. Do not use rubber. Use a paper clip for the towing hook. Use rear towing hook when using a long tow line. Be ready to run after your glider because it will go a long distance before landing."

Scan from KaoruKiyose, cleanup by TonyP. 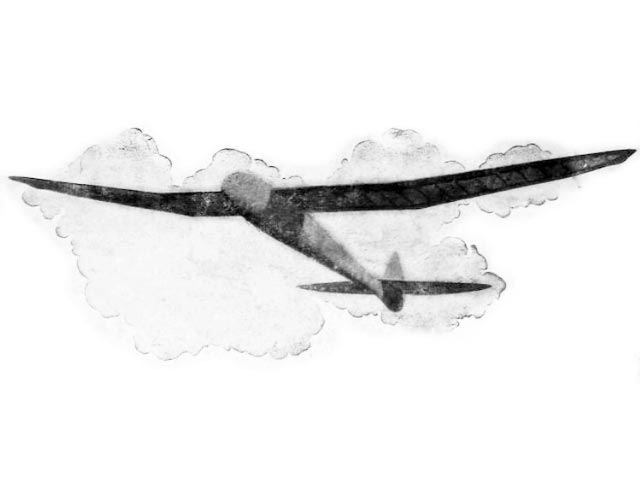