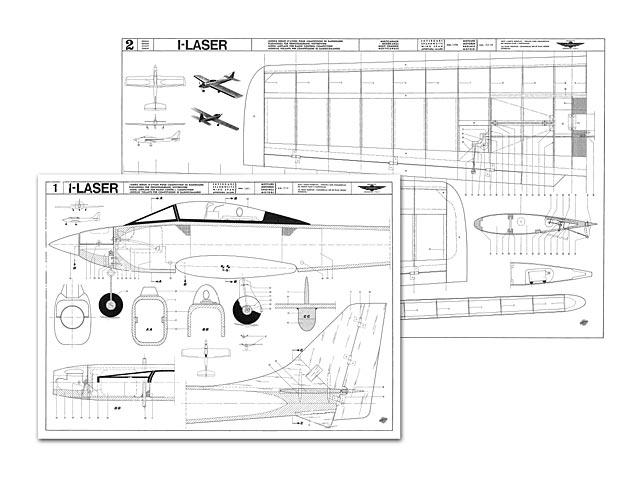 Quote: "From the Italian Aviomodelli company the I-LASER of circa 1966. The name is written similar to the Italian identification real Aircraft code: I (for Italy) - followed by 4 letters, in this case 5 letters The I-LASER was one of the first successful FAI Pattern Italian machine and participated in the Corsica 1967 FAI Pattern World Championship. It was flown with old 'reeds' RC equipment and later proportional equipment. This Aircraft was for ever bounded to the Italian modeller Guglielmo Reda (in the cover of Aviomodelli catalog and attached photos) one of the official pilots in Corsica Championship Team. It was for decades one of the best seller pattern kit in Italy, a very nice machine in camouflage colours."

IT is a rare occasion for us to be able to sample R/C modelling goods from Italy. Some time ago, however, we received direct from Aviomodelli, a kit for their I-Laser. A 68 in span low wing multi model.

The Laser (we quickly dropped the 'I' prefix) is certainly an attractive model. It has a moderately tapered wing, thick wing section and plenty of area. The fin is swept back and the overall appearance is very 'fighter-ish'.

By any standards, the I-Laser is an extensively pre-fabricated kit. On opening the box, the most immediately imposing piece of pre-fab work is the fuselage which is a two-piece hollow log arrangement, both top and bottom halves being moulded. Also ready shaped are the massive leading edges (at least 1 x 1 in), trailing edges which are channelled to key with the wing ribs and strip ailerons. Fin, rudder, tailplane and elevators are shaped from solid, ready to be lightly sanded and fitted in position.

Die cut parts are very well done, particularly the wing ribs which are crisply stamped. On top of all this, there is a lavish selection of hardware which includes a set of three wheels of the trike undercarriage system, steerable nose-leg assembly, formed main undercarriage and hard-wood mounts, elongated plastic spinner, nylon moulded control horns and control surface devises.

At an early stage we decided on modification. Personally, we went off strip ailerons a long time ago, so we set about planning inset type ailerons, which were easily incorporated by cementing the strip aileron pieces on to the trailing edge of the wing. Once this was done, the inset ailerons could be built integrally with the wing and sawn away once the wing was completed.

Thanks to the two-piece log construction, the fuselage goes together in record time. There's really little to do except position and cement the engine bearers, ply dowel hole reinforcements, join the two halves and position the firewall. Useful additions at the rear end of the fuselage are tube guides at the push-rod exits. The plans show details for both upright and inverted motor mounts. Highly tempted as we were to select the more realistic layout, practical considerations prevailed, and the motor went in upright - a pity now we come to think about it.

Looking for an interesting colour scheme, we settled on the decor of the Italian Air Force aerobatic team (Frecce Tricolori), which, considering the origin of the design, was very appropriate. This involves blue upper surfaces on the fuselage wing and tailplane, and red, white and green Italian tricolour stripes across the underside of both wing and tailplane and over the fin and rudder assembly.

Covering selected to do the job was Solarfilm, our first experience with this material and very satisfied we were too. Solarfilm goes around compound curve surfaces extremely well, and, as with all the iron-on covering materials the technique demands just a little patience rather than any exceptional expertise. One important point to remember is that once the edges of the material have been sealed, a low heat setting is required, otherwise the iron may burn through the sheet - a fact we discovered through over enthusiastic ironing work.

Once covered the only remaining problem concerned the installation of radio equipment and motor. Since the fuselage is fairly slender, it would only accept two servos of the Kraft KP-6B system employed side-by-side across the fuselage. However, the wing has a wide chord, so that the radio compartment is long, and easily accommodates all the radio with the elevator servo just ahead of the rudder and throttle servos.

Originally, the engine bearers were drilled to take an OS 60 F R/C motor. However, we elected to try an idea that we have been kicking around for some time now - namely that a smaller sized motor would produce a slower, yet reasonably aerobatic model, ideal for practicing the aerobatic schedule.

So in went an OS 40, complete with DS silencer and the model tipped the scales at just 7 lbs. The result was a surprising performance. The Laser was capable of the full FAI aerobatic schedule (once the pilot had mastered it, that is) with enough steam for all the manoeuvres, yet slow enough to allow the pilot to think himself out of those nasty panic stations situations.

Landings are a joy - long, low and slow, and we can honestly sum up Aviomodelli's I-Laser as one of the most enjoyable multi models we have had for a long time. The next stage is to fit that OS 60." 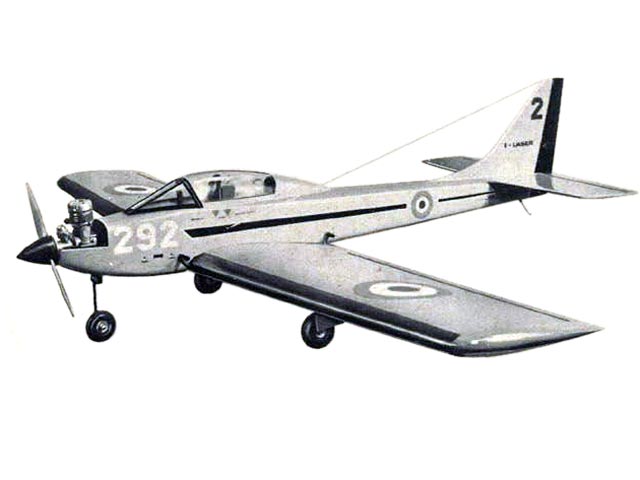 About aileron on plan and review.
Short or "barn door" ailerons were used with "reeds" non proprtional radio control. But with the introduction of proportional radio control (like today's systems) the strip aileron was adopted for better performance in flight. The plan on OZ has strip ailreron, probabbly the first kit has short aileron considering that in Italy many modeller continue to fly with "reeds" system until the 70'. Guglielmo Reda said me that he participated at 1967 Corsica World Championship with reeds radio, and his performance was impossible to compare with propo radios.
For more info see: http://classicpattern.com/wc1967corsica/?lang=en
pit - 09/03/2020
Add a comment