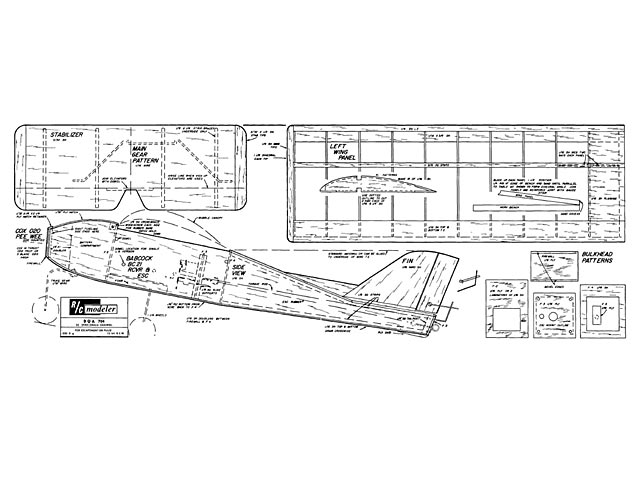 Quote: "The D.Q.A. 704 was designed in the Summer of 1964 by Stu Babcock as a test bed for Babcock Controls' new BC-21 and BC-22 single channel systems. When RCM's Consumer Research Department received the first production unit of each system for evaluation, they were installed in two of these 32in span models - a welcome breather for our tired old fleet of test ships! After several days of F.T.E. (Flight Test Evaluation space age terminology for an excuse to go flying instead of editing copy!), we were not only thoroughly convinced that Babcock's new single channel escapement and proportional systems were ideally suited for the sport flier and newcomer to radio control, but that the ship used as a test bed was one of the best flying, small-field single channel airplanes we had run across!

The combination of the DQA and either one of these tried and proven control systems assures success for the beginner and gives him the feel of radio control flight at very low cost. It puts him in an excellent position to get his own opinions on larger more powerful airplanes and control systems that he will want in the future. The DQA is simplicity itself to build. The control systems are the easiest to install of any we have evaluated.

Performance-wise, the trike-geared mite tracked straight across the asphalt, lifted off easily, and bored straight into a gusty wind at a slight angle of climb. We got the impression that the 704 would probably bore straight ahead until it ran out of fuel unless we turned it - so, we started playing with the knob on the BCT-22 transmitter. A slight twist of the knob and the D.Q.A. responded with a beautiful banking turn, unlike the more "jerky" turns usually associated with escapement flying. Progressing downwind, now, the ship retained its altitude without any tendency to climb. Another right, and we turned about into the wind. Centering the knob on the transmitter we tracked, for a moment, straight on heading, then depressed and held the "full left" but ton. The D.Q.A. responded immediately by entering a left spiral. After a few spiral turns to gain speed, we released the button and the D.Q.A. went up and over into a loop, recovered easily, and once again bored on into the wind with a slight climb. After a few more laps around the field, plus another couple of loops, the Pee Wee .020 ran out of juice and we began our descent.

For the experienced single channel sport flier, the glide rate of the D.Q.A. would be too shallow and he would probably remove a slight amount of incidence. For the beginner in R/C, it is ideal a flat, almost-floating type of glide reminiscent of the old free-flighters. Turning onto the final leg, the 704 pointed its nose into the wind, tracked straight and steady, then touched down on all three wheels and rolled about twenty five feet to a stop. Each flight thereafter was the same smooth takeoffs, excellent wind penetration, smooth banking turns, easily executed loops, and a well-defined glide pattern followed by a hands-off landing... " 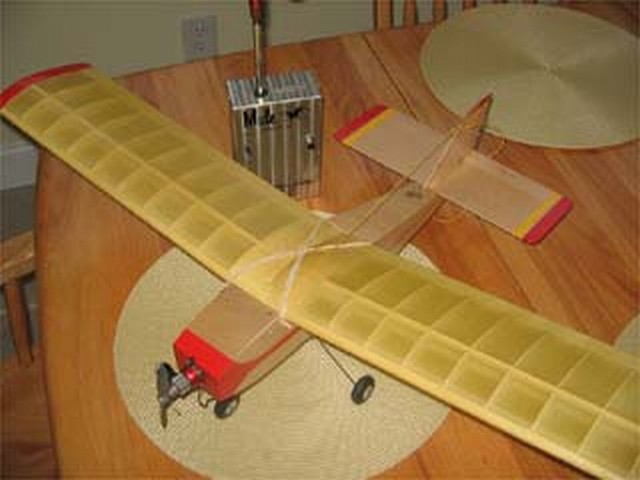 DQA photos [see more pics 003, 004]. Came in at 9 7/8 oz but tail heavy. With nose weights should hit the design weight of 11 oz. Would recommend extending the nose a 1/2" or so for more battery room and for balance. The fuselage is short compared to the wing span.
bhibbets - 12/08/2013
D.Q.A. 704 stands for Damn Quick Airplane, and the 704 is how much it cost to build, not counting engine and radio. Mine was covered in red silk for the wing and jap tissue everywhere else. It's one of the original "park flyers" because that's where I flew mine. Nobody complained about the shriek from the Cox Pee Wee 020. I used the exact same Controlaire Mule transmitter shown in the photo, with a Citizenship "sugar cube" receiver and escapement. It needs every bit of the seemingly excessive downthrust for the Pee Wee, which was a little too much motor. Nowadays it would make a fine electric with about a 300 motor, and I would leave the landing gear off and skid it to a stop on the grass.
DougSmith - 14/07/2015
Add a comment