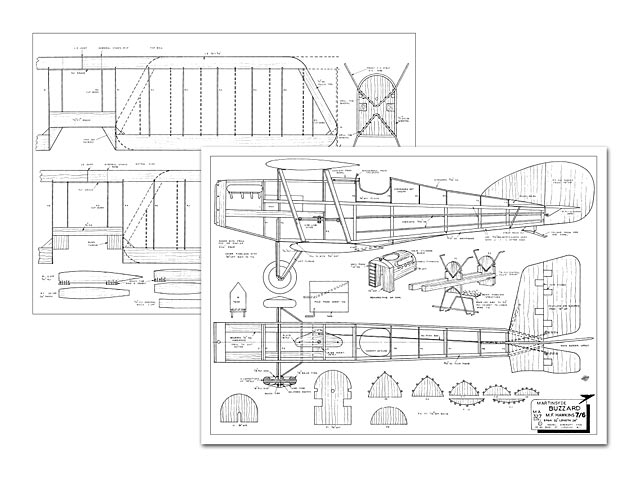 HAD the Armistice not intervened, the Martynside F.4 Buzzard would have had a major influence on aerial fighting. It was a very advanced design, tough, powerful and fully acrobatic, although being larger and heavier than its contemporaries, it's turning radius was somewhat greater. The Buzzard was the fastest WWI scout produced in this country. It was fitted with a 300 hp Hispano Suiza engine, and had a top speed of over 144 mph. There were plans to build 1,500 of these machines in the USA, but the contract was cancelled upon the cessation of hostilities in 1918.

During the post-war Peace Conference, a Buzzard travelled the 215 miles between London and Paris in hour 15 min, setting up a new record for the RAF Communications Wing, for which it was flying.

A floatplane version was built and one Buzzard was exported to Japan where it had a considerable influence on early Japanese fighter design.

Construction: Start by cutting out the wing ribs and binding brass or aluminium
motors tube to R1 and R3 (12 gauge for the cabane struts and 14 gauge for the interplane struts). Assemble the wing halves then join the LE at the centre line, using ply brace 'B' - there should be 2 in dihedral under each tip. Fill in the top of the lower wing LE centre section with scrap sheet and level off the upper surface to give a flat centre section seating. Fill in the rest of the centre section and add 1-1/4 oz lead to the outboard lower wing tip. Build up the basic fuselage structure as shown in the sketch, and at this stage bend the cabane strut wires to fit into the tubes on R1. They should be a tight fit so that there is no fear of the wing sliding off in flight. The control plate, push rod and tank may now be fitted.

Build the 3/16 sq framework, cement to F2 and F3 and when dry add the remaining five formers. The 1/16 in sheet floor between F4 and 5 is at just the right height to allow a class 'B' team race pilot to be realistically installed in the cockpit. Now sheet the forward fuselage back to F4 and the decking to F5, and add the tailplane, which is cut from 1/8 sheet with ply elevator horns. The elevators are not connected to each other.

Next add the 3/32 sq stringers not forgetting to superimpose one down the outside of each 3/32 sq longeron, to raise it to the level of the covering. The tail skid is made from dowel and wire, then stitched to 1/8 ply and let into the rear fuselage bottom bay.

Firmly attach the lower wing to the fuselage and then assemble the undercarriage. The rear member is shaped as shown on the sketch and is then sewn to a piece of 1/2 x 2-1/2 x 1/16 in ply which is recessed and firmly cemented under the leading edge of the lower wing. The axle is firmly bound and soldered to the under-carriage legs. The wheels are made by the sandwich method as shown on the plan and are retained on the axle by a soldered washer before the card cone is fitted.

The upper wing is now temporarily fitted and the interplane struts bent from 14 gauge wire and individually fitted. Solder the line guides to the inboard (port) pair of struts.

The cowl is made from 1/8 sheet, the front end being 1/2 in block, and wire spring clips are used to retain it in position.

Covering and Colouring: Use lightweight tissue on sheet parts, heavyweight Modelspan on the rest. Undersurfaces of wings and tailplane are yellow tissue, the rest is done in matt green with black cylinder blocks and silver grille and exhausts, while bracing wires are made from elastic thread.

Flying: The all up weight with a Frog 500, is about 24 oz, and no ballast should be necessary to balance. With an engine of this power a 9 x 6 prop and 60 ft lines are recommended. Manoeuvres should be flown as smoothly as possible as sharp appli-cation of the elevator, while useful to get out of a tight spot, will cause the built-in headwind to have full effect and stall the model. Fly over a smooth surface as the undercarriage is fairly far back and the model may nose over on landing." 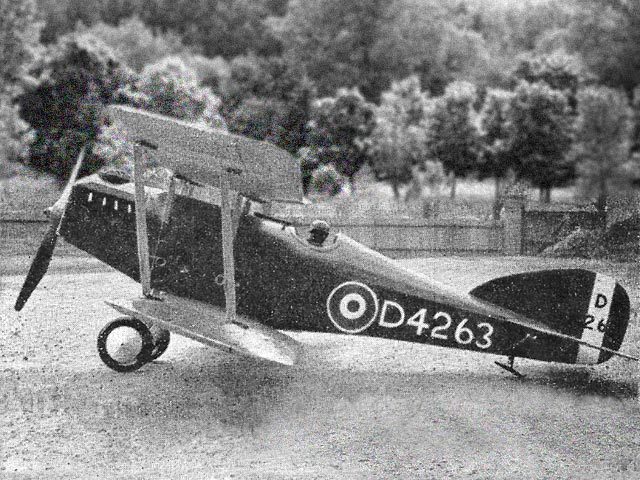