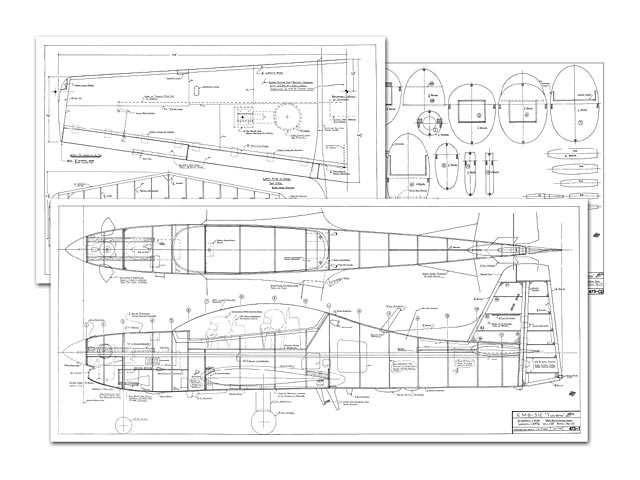 Quote: "The prototype is a unique, two-place, turboprop military trainer produced in Brazil. Our author's 66-in span RC Sport Scale version for a .75 engine flies as smoothly and nearly as responsively as a good Pattern airplane. Tucano, by Joseph R Naber.

AS MOST model builders are inclined to do, I was sitting in my work room waiting for the last coat of paint to dry on my latest creation, when I started to wonder what I should work on next. Having built all my previous Scale models as tail-draggers, I decided it was time to find a suitable subject with a tricycle gear setup; I thought this would give my aging fingers a little help during the takeoff and landing procedures.

You may have noticed that there are not too many non-civilian aircraft around these days that have a tricycle gear and also are prop-driven. A thorough review of my aircraft books did nothing to help the matter - until I picked up the then-current issue of Aircraft International magazine, which had an ad for the Brazilian EMB-312 Tucano. This was a twin-seat, turboprop trainer. The minute I saw the photo, knew it had the features of the aircraft I wanted to build in model form. I wrote to the sales office listed in England, and several weeks later they were kind enough to send me a very detailed brochure with pictures and three-view drawings. After reviewing the literature, I knew instantly that I had made the right choice.

The EMB-312 Tucano is built by the EMBRAER Company in Brazil and is designated the T-27 by the Brazilian Air Force. It is a tandem-seat trainer powered by a Pratt and Whitney PT6A-25C free turbine engine developing 750 static hp and driving a three-bladed Hartzell propeller. Maximum speed is 253 knots (291 mph). It is unique in incorporating the Martin-Baker ejection seats, although it is a trainer. The one-piece canopy hinges at the side for easy entry and exit. The aircraft is stressed for plus six and minus three gravities, allowing it to perform a complete range of aerobatic maneuvers. The Tucano is now being used by the Brazilian Air Force flight demonstration team.

There is a very extensive article on the Tucano in the January 1983 issue of Air International magazine, Vol. 24, Number 1. At last report, back copies of this issue were available for a cost of $2.80 (checks accepted) from Air International, PO Box 353, White-stone NY 111357.

Brazil is trying to sell this aircraft to other countries - and has sold some to Egypt. In the near future, we should be seeing some varied paint schemes for our modeling use. It was from the above information that developed my model plans by using a projector to enlarge the three-views to the size needed. In this I was influenced by the several kit models I had recently built having larger than .60 engines and wing-spans of 60 in or more I found that these models flew much nicer than the models with heavier wing loadings that I used to build. After examining several wingspan/ power plant combinations, I settled on a .90 engine and 68-in wingspan. As the model developed, I began to feel the .90 engine would be too powerful. I changed to a .75 Supertigre which has proved to be very effective and has served me quite well. I also know, now, that a good .60 engine has plenty of power to fly this aircraft - due to the model's lightness (for its size) and its aerodynamically clean configuration.

I proceeded to draw up the plans, adding formers and other details as required. After several preliminary sketches and shuffling of pieces, I arrived at the final setup I thought I wanted. (It is amazing how much time one can spend in deciding on which of several assembly methods to use for what will give the best results and most efficient use of materials. Even simple things take time - like should the wing be bolted in front, or should a dowel-and-hole arrangement be used. Consideration of radio gear, wing construction, and various other items all come into play during this choice process. Ultimately, this is what is enjoyable as you get to use the construction methods which you are comfortable with and use materials which suit your building techniques the best.)

The only deviation from scale that I had to make for the model is in the location of the nose gear strut. Because of the inverted engine. I had to move it rearward. This, however, is not nearly as noticeable as a side-mounted engine alternative would be (with the cylinder sticking out in the breeze). I elected to have retracting landing gear, flaps. and I also decided to install bomb dropping mechanisms in the wing pylons; however, these are not shown on the plans.

Construction: The text is written with the assumption that you have a varied knowledge of building techniques and that you have some familiarity with the ideas and materials used with this model. If you are not past the square fuselage type of model, you may have trouble with this aspect unless you have some experienced friends who can help out. But, then, who hasn't tried to build a model before they knew everything about what they were doing? As a matter of fact, I did that very thing with this project - this is how we learn.

After reading this article through, you will see that you will have to learn to form a clear plastic canopy and make a fiberglass cowl. Making these items for the prototype model was the first time for me, and both of them worked out quite well. After reading how I made my canopy mold (if you decide to do yours in the same way) you must adjust the cutting of the fuselage formers to include the uppermost part of the formers. The correct outline of the canopy is shown, but you must make allowance for the thickness of the balsa sheeting.

Fuselage: Start by cutting out all the formers. Use medium weight balsa throughout (leave the heavy stuff at the hobby shop for the next guy's slab-sided fuselage). The tail moment is long, so lightness in the tail area will pay big dividends in the lessening of the amount of ballast you may need in the nose. Formers 1, 2, 3, and 4 must be reviewed and altered as necessary to suit the engine bearer spacing needed for your particular engine. I made my bearers a little oversize so I could trim them to suit at a later time. Former 1 must also be sized at this time to fit the spinner you will use.

Do not use balsa for the fuel tank compartment floor, as I feel this member helps absorb the forces from the forward-mounted nose landing gear box. Use of a retract gear other than the type shown will necessitate some revision to the formers and mounting box. Keep the front of the gear box at least 3/8 in from the engine cylinder for proper airflow inside the cowling..." 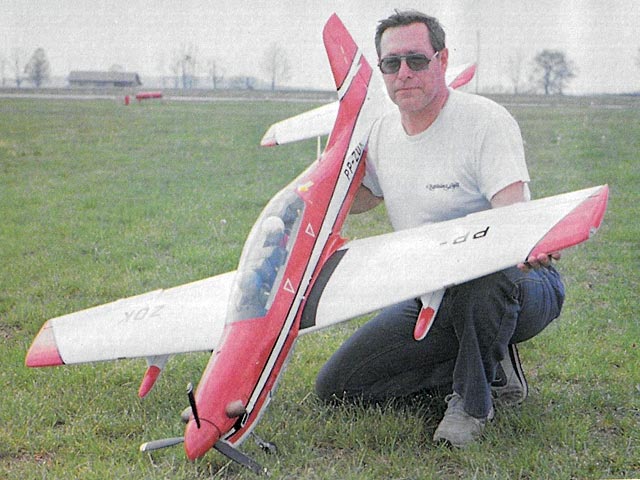