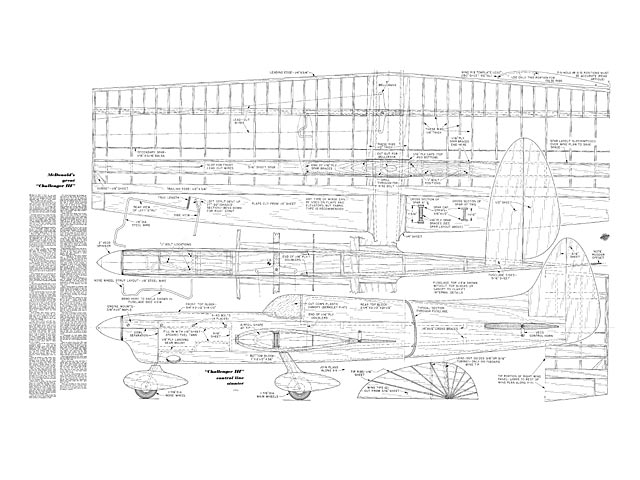 Quote: "Back in 1951 I drew up my first stunter and flew in my first contest. Since that time I've designed and built more airplanes than I like to think about. This is the best I've come up with.

Fliers familiar with my stunters for the past several years still notice that they all apppear similar. This has been diliberate. I feel that a lot of fuselage side area is important in a stunter; this general configuation has come to be a sort of trademark with me; I like the looks of it and never had any reason to change it.

Outward appearance is where the similarity ends, however. The airfoil and plan form of the wing have been altered, the moment arms juggled, and most important, a tricycle gear added. The result of these changes is what I honestly feel is the best handling stunter I've ever flown - and over the years I've flown a lot of them.

While this ship was designed specifically as a Nationals airplane, built to operate from paved runways, the addition of slightly larger wheels should make it an excellent off-the-grass or dirt job.

Prior to 1951 I had flown in four Nationals, and had finished second twice, third and fourth once. When I test flew the Challenger III, I felt sure that '61 was going to be my year. So what happened? I broke a pushrod on the first day of practice at the Nats and left pieces of the front end all over Willow Grovee NAS. Wound up flying a second-best ship to finish fourth again.

As a matter of fact, my Nationals record is what prompted me to name theis plane the Challenger. Seems like I'm always a strong contender but never the champion. I feel the fault - if not quite winning is a fault - lies with me and not the airplane. I'm sure that after you have built and flown this job you will find it is one of the best.

The false rib wing used here while not as hard to build as it looks, does take a little explaining. Alos, I want to throw in a few remarks about the fine points of building - not only this plane but any stunter. Stunt flying is nothing more than careful attention to a lot of little details. The rest is just a set of conditioned responses.

First building step is to construct the main spar. Splice the two halves together, laminate the plywood doublers as shown. Leave spar about 2 inches wide to start..." 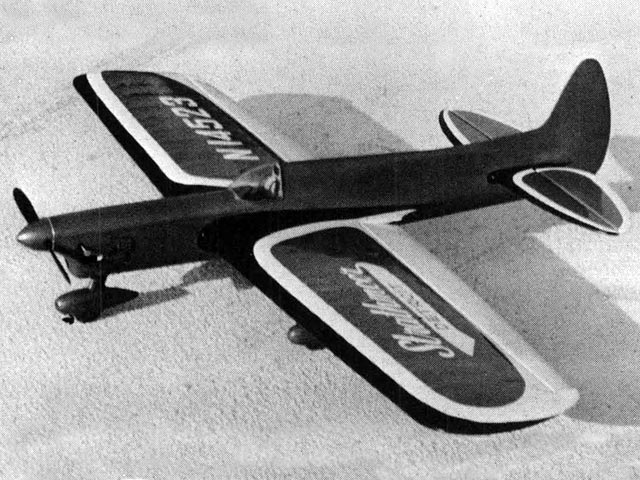