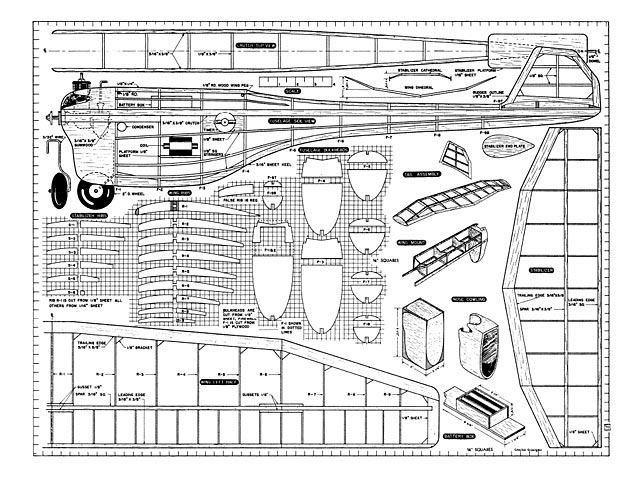 Quote: "A consistent contest performer for engines with a displacement of .19 to .23 cubic inches. Pinnacle, by Michel J Latorre.

AT the past five or six contests held in the New York area, the preponderance of small gas models was evident. And why not? They are easier to build, less expensive, more convenient to transport. and faster climbing than their big brothers. All contest builders know the importance of a fast climb. It means more altitude and consequently renders a ship more vulnerable to thermals, the proverbial sky-hook that accumulates the minutes on a stop watch timing the duration of flight.

The Pinnacle possesses that prominent quality of being extremely fast-climbing and thermal-conscious. To date, three of them have In built, but only one remains. The first was too anxious to reach the sun and flew out of sight before getting the chance to enter a contest. The second was saved for the first contest after completion. which was the WMC meet held at Hicksville, LI. After a few test hops, the last of which did two minutes and ten seconds on a nine-second motor run, we sent the Pinnacle aloft on its first contest flight. After nineteen seconds the engine cut, and she sat square on a thermal way up in the blue. The Pinnacle remained in sight of the field for five minutes, but we chased it on foot and bicycle for several miles, and after 25 or 30 minutes the ship finally realized the existence of Newton's Law and conceded to gravity.

On its-second official flight, having experienced the vastness and beauty of the wild blue yonder, the Pinnacle, in its over-anxiety to explore space above the stratosphere, climbed to an even higher altitude than on its previous flight - to live up to its name. This time, a car was used to chase the ship but nothing short of an airplane would have sufficed since, after five minutes and 52 seconds, the little plane was imperceptible, being engulfed in the clouds. We placed 3rd, with a ten minutes and 52 seconds total for two flights. That accounts for Pinnacle Number 2.

The third Pinnacle to be built still exists, for it has never been flown. We wanted to get some Pictures of her first.

The Pinnacle is designed to fit Class A or B engines whose dis-placements range from .19 to .23 cubic inches. It conforms to all the current AMA rules.

Fuselage: The fuselage is of the crutch type. This type of construction has proven ideal, for it is light and strong. and requires little time to build. The first step is to cement the 3/16 x 3/8 in gumwood bearers to the 3/16 x 3/8 balsa crutch. Using the top view, lay out the crutch. Cut out from 1/8 sheet balsa all the formers and from 1/8 plywood, the firewall. Before cementing the firewall in place. bend the landing gear and secure it to the firewall by drilling holes and sewing it into place with thick thread or soft wire..."

Update 22/02/2019: Replaced this plan with a clearer version, now re-scaled up to correct full size, also fixed the missing section along the top edge at the left. 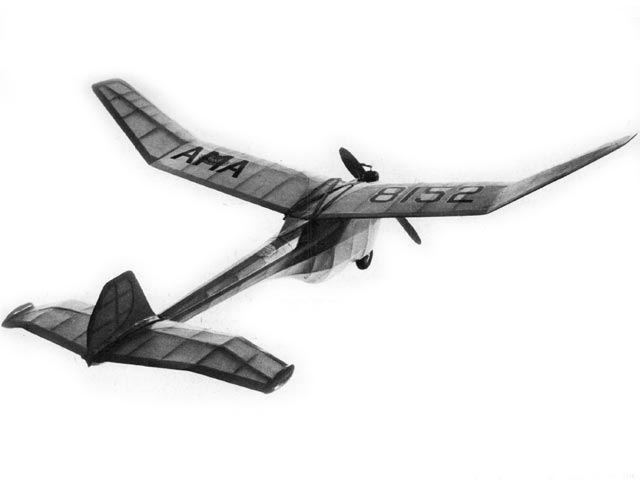