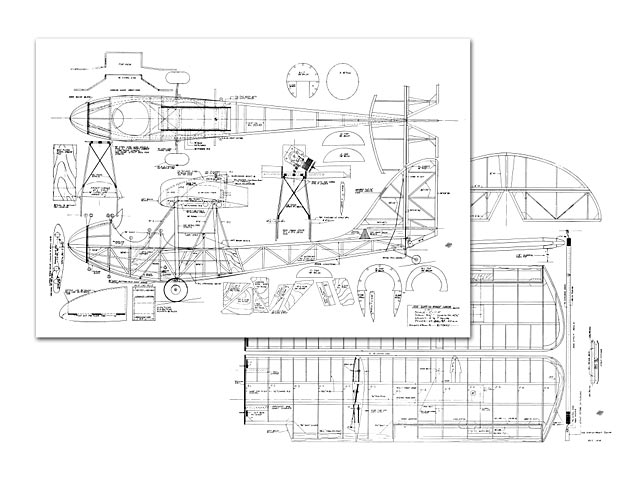 Quote: "An out-of-the-rut scale model that is easy to fly. As stable and forgiving as it is unique and interesting. Curtiss-Wright Junior CW-1, by Ralph Fidance.

The Curtiss-Wright Junior is one of those 'cute' airplanes that looks as though the designer had modelers in mind when creating it. With a 7-1/2 to 1 aspect ratio wing spanning 39 feet, and a 3 cylinder, 40 hp Le Blond or 45 hp Szekley engine, the CW-1 falls (or floats) into the powered glider category, along with the early Aeronca C-3 and Longster.

The 'rocking horse' fuselage has a turned-up nose that gives the pilot a front porch view. This made the Junior a popular plane for aerial photography and hunting. During the years 1930 and 1931, 270 CW-1 'Juniors' were built, and the selling price was only $1,500. They cruised at 70 mph, maxed at 80, and landed at 32 mph. The gas consumption at cruising speed was 2-3/4 gallons per hour, or about 25 miles to the gallon.

As a modeling project, the Junior is out-of-the-rut in construction, appearance, and performance. The high thrust line pusher engine and parasol wing combination calls for some fancy wire bending and the use of functional struts. Its appearance at the flying field should be a welcome change from the usual run of nameless toads. As for flight characteristics, there should be no doubt about its ability to putt around realistically. Just one thing to watch. It can use a little power on landings. If you come in deadstick, keep up flying speed with a steep approach until you're ready for the touch-down flare.

Construction: Everyone has their favorite method of building a model. Some start with the fuselage, which is usually considered the most difficult, and then keep build-ing and adding parts until the plane is complete. Others prefer to get the ted-ious part out of the way first; the wings, then the fuselage, and finally, the tail (which seems logical since it usually comes last).

Our own preference is to start with the fin, rudder, stab, and elevator. This sort of eases you into the project, as material and tool requirements are rather uncomplicated, the structure usually doesn't take too long to get together, and when you finish them, you sort of have the feeling that you're well along with the project. Nowadays they call this psyching yourself for the job.

The tail surfaces of the CW Junior are basically a 1/4 inch thick framework. The curved portions of the surface outlines are made up by laminating four 1/16 x 1/4 inch strips. After making the four-layer sandwiches of balsa and glue, curve them to the outline and pin in place. Allow these to dry and take a set before trimming off the excess and completing the framework.

Fuselage construction is of the traditional framework type, with 1/4 inch square longerons trussed with 1/4 square and 3/16 square verticals, diagonals, and cross pieces. Note that all of the 3/16 inch square truss members aft of the side stringers are installed flush to the inside of the longerons. This provides a raised frame, which will ensure a smooth, bump-free covering job.

Forward of station E, the framework curves inward rather severely and may require some special treatment. We would suggest a series of vertical saw cuts part way through all members, on the inside, about a half inch apart, start-ing at E and working forward to station A. Just before pulling the sides together with crosspieces inserted, force Titebond or epoxy glue into all of the saw cuts to recover the strength.

The tail surfaces are mounted on a carved fairing block. Best bet is to band or jig-saw the block to the profile, draw a centerline along the top, hold the fin in place and trace around it. Now glue the block in place and start carving. A No.26 X-acto blade (of course in a handle, Dum Dum!) is real handy for this. For final shaping, the fairing should be convexed somewhat, as shown on the drawing.

The center section and cabane struts are sort of the keystone to the whole airplane, and though they look complicated, they can be assembled without too much trouble. We won't go into the whole science of accurate wire bending, but since the wire cabane struts deter-mine the final alignment of surfaces, some suggestions will be made.

First of all, and let's take strut No.3 for an example, don't start at one end and work your way around. Rather, determine the total length of wire required for the strut, divide the figure in half, add an inch for good measure..." 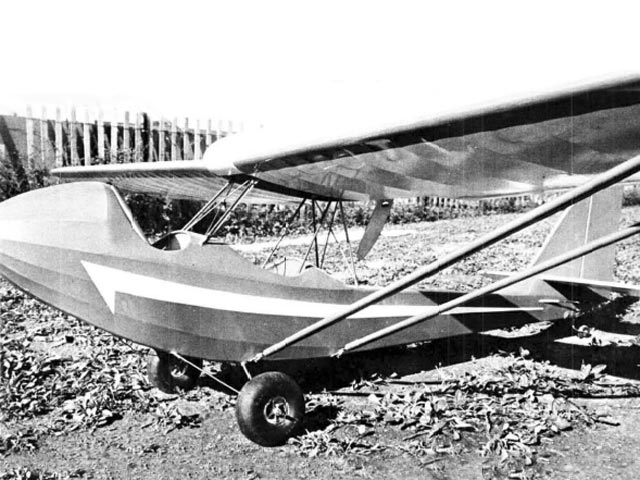