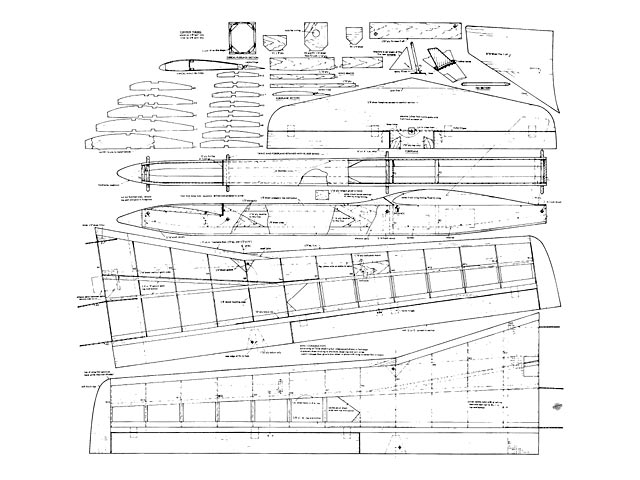 HAVE YOU EVER had one of those days when you take the family flying and they say: Oh, that's good, which one is yours? Or you are sure the marshall has been watching someone else's Suzi-plus-phase-racer instead of yours? All the current breed of aerobatic slope soarers seem to look the same at 50ft, except the colour schemes. So why not try something different? If you have come to terms with rudder/elevator trainers and can't decide which aileron model to choose because they all look like Suzi-Q variants, build an Enigma. Make sure they all recognise your model. You will also have the benefit of using the stabiliser for added lift during normal flying.

The Enigma was conceived about two years ago because I wanted something different to fly. Flying wings and deltas seemed to have a bad name in our club, for poor elevator response. So it had to be something really different.

I had heard somewhere about the amazing flying characteristics of canards. They are supposed to have a very wide speed range, be impossible to stall and easy to fly. Enigma bears out two of these three legends, the impossible to stall part is a bit of a myth. The truth is canards will stall, if provoked or if badly designed. So Enigma was designed to be simple to build (just in case it did not work) and to be an eyecatcher.

Building: If you have never built an aircraft that did not come from a box with a picture on the front and all the bits and pieces in neat bundles, secured with elastic bands, then try this way.

Assemble around you all the paraphernalia necessary to make any model. Knives, sandpaper, saws, clamps, pins, razor plane and sticking plasters! Then add one or two extras, a steel rule, carbon paper, pencils and wood. Wood comes in planks of varying thickness, normally 3 in wide and 36 in long and has to be cut to the required shapes. (Not all trees have R1 stamped all the waythrough like Blackpool Rock). A list of the wood required is shown on the plan.

Start with the fuselage, which is the simplest structure, by cutting out the fuselage sides. Assuming you don't want to cut the plan to pieces to make the parts, cut a few windows about 3/16 square along a datum line so they open like an advent calendar and, when you lay the plan over the piece of wood, you can open the windows and align the edge of the wood with the lines on the plan. I find it easiest to use the straightest edge of the part to be made as a datum, which in this case is the fuselage top.

Now use a pin and prick through the plan into the wood at strategic places around the outline of the shape, close together on curves and cut-outs, far apart on straight edges. Don't forget to show details like the positions of formers and holes in the same way. Now remove the plan and cut out the fuselage side by joining up the correct dots with a knife. Ignore the cut-out for the foreplane at this stage, as it will make it easier to shape the fuselage, but mark it for cutting out later. This side can now be used as a template for the second side - although you should take great care not to cut into it by mistake,

I use carbon paper between the plan and the wood for marking out the formers, tracing over the outlines using a sharp pencil. (At this stage it is wise to check that your radio gear will go in. If not, you can increase the width by making formers 1, 2 and 3, wider to accommodate any size of receiver - or buy new gear!)

Continue in this way to make the doublers, etc., and so produce your own kit of parts to make the fuselage.

Glue all the appropriate pieces together to make two fuselage sides, using contact adhesive for the ply doublers and longerons at this stage. (A left and right-hand side is best unless you intend mass production). Clamp both sides together with their outsides inside and sand so that both outlines are identical.

The fuselage can now be built in the normal way upside down on the board, taking care to build a straight fuselage rather than a balsa banana! When the former and side joints have dried, glue in place the fuselage bottom, using white woodworking glue. Note that the wood is cross grain for strength to make it easer to bend around contours. Remove the fuselage from the building board when dry, then you can add the fuselage top and nose block. You can now have hours of fun planing and sanding the fuselage to a sort of round shape. (Well, it is - sort of - when I do it anyway!) Now you can cut out the foreplane fairing from the fuselage. The foreplane is cut from 3/8 medium hard sheet of balsa, joining where shown if using 3 in wide sheet, and tack glue the 1-1/4 x 1/4 in trailing edge in place.

Now start on the main wing. Again it is best to make a kit of parts, using carbon paper for transferring the outlines of ribs 1-5 onto the wood. Use these ribs as templates to make a second set for the other wing half, Also cut out rib 5 and rib 14 from 1/16 ply and make the remaining ribs. 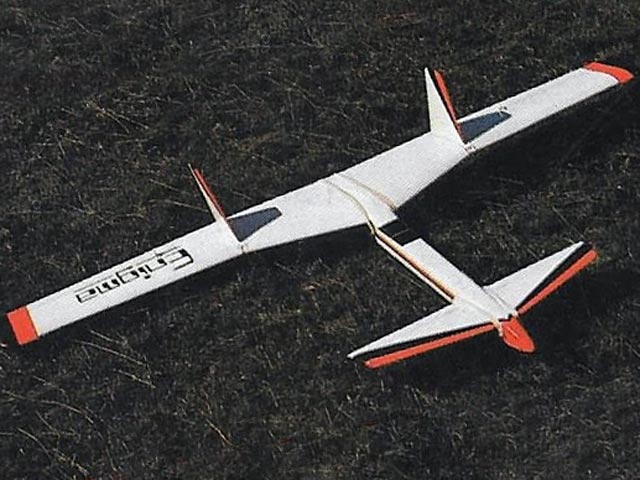