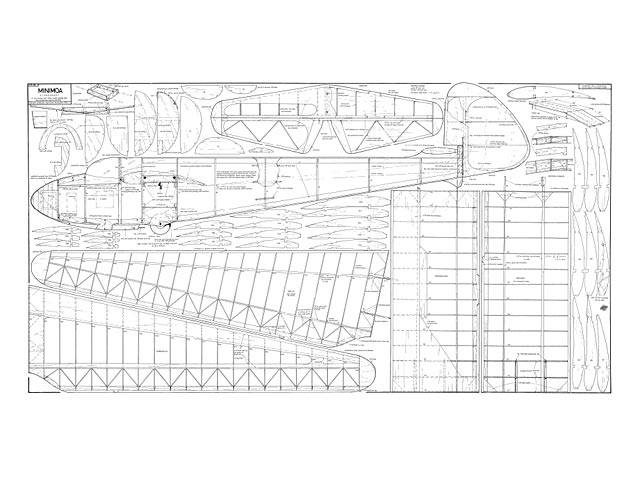 Quote: "A really attractive replica and a pleasing, responsive flyer - for those who enjoy building. Minimoa, by Bob Banks.

FIRST BUILT in 1975, this was designed in order to satisfy my craving for 'something different'. As I am not a very experienced RC pilot (though an old hand at free-flight modelling) I kept it simple, using rudder and elevator controls only. The model is based on Wolf Hirth's 1936 version and, as far as proved practical, rib spacing and sheet covering areas are as on the full size craft. I had doubts about the tailplane area but I kept it to scale, and this proved to be quite adequate.

First flights were made from bungee launches and, after making adjustments to the CG position, proved very successful, the climb on the line being very majestic - and right 'to the top', even in almost calm conditions.

I flew the Minimoa for about a year until one day, flying from the slope in very marginal lift conditions, I slowed it up too much, resulting in a tip stall and a crash onto a wingtip from 50 ft. This was when Francis Donaldson took over - as I had thoughts on further things, and he was keen to get my model flying again. He repaired the wing and what was more important, altered the tailplane incidence to that shown on the plan. Making this change, and moving the CG to the position shown, made the Minimoa a real joy to fly. The model now has many hours of trouble-free flying to its credit with these settings.

Francis has dubbed the Minimoa a 'practical scale' model, as it has flown in most weather conditions, is simple to operate and maintain but is still a scale model. It is a 'builder's model' however, and uses methods which may appear old-fashioned to the newcomer - no foam or fibre-glass - so, unless you have a reasonable amount of building under your belt, rather than 'assembly', then it might be better to wait until the time comes when you have.

Wings: It is best to build the centre section first. Cut out all the centre-section ribs, therefore, and face the three outboard ribs in each panel with ply, to reinforce them, and then drill them to take the tubes for the wing joiner dowels. Pack up the spars and the front of the trailing edges so that these conform with the profile of the undercamber. Glue on the ribs, noting that outer ribs are angled, with their lower edges inwards - template provided on plan. Add the top spar and leading edge, epoxy the wing tubes in place and pack up with scrap balsa; add the gussets and leave the assembly to dry overnight, before removing it from the plan.

Build the outboard wing sections in the same manner as the centre sections, but use a wedge at the tip to pack up the trailing edge so that washout is built in. This should be kept for use on the wing jig, des-cribed later. This wedge should be +in. at the tip, tapering to zero at the root.

The wing jig: Cut this from chipboard or block-board offcuts, from your friendly local woodyard, to the dimensions shown. It may actually be made from any suitable material but it must be strong and rigid.

When both sections of the wing are dry, a slot must be cut between upper and lower mainspars on the root rib of the outboard section, to take the ply joiner. Slots must also be cut in the root of the outboard section to allow the ends of the root section spars to pass through. The two sections may now be joined on the jig, not forgetting the washout wedge, as previously described. When dry, sheeting is added and the whole wing carefully sanded to final shape.

Fuselage: This is built on the 'keel' system, with half-formers glued to a keel, on the board. Hard balsa and 1/8 ply are used for the keel, and the sternpost is of 1/8 x 1/2 in spruce, with hinge tubes bound and glued to it before it is fitted. Cut out all the formers and mark the positions on them of the cross bearers for the wing and wheel boxes. Pin the keel onto the plan and glue on the left-hand set of formers. Add the spruce stringers and leave to set. When dry, remove this structure from the board and add the re-maining former halves, but this time epoxy in the hardwood bearers before adding the stringers.

Make up the wing boxes and wheel box from 1/8 ply, cut and bend the 8g wire wing dowels, and position these accurately before securing with epoxy adhesive. Now epoxy both wing and wheel boxes into position and fit the tubes to take the control cables.

Plank the fuselage with strips of 1/8 thick balsa. This allows for to be sanded away when finishing. The planking of a fuselage is very satisfying as long as itis not hurried Strips 3/8 in wide are tapered at the nose and tail, and added one at a time, with the splices carefully staggered and the edges chamfered..." 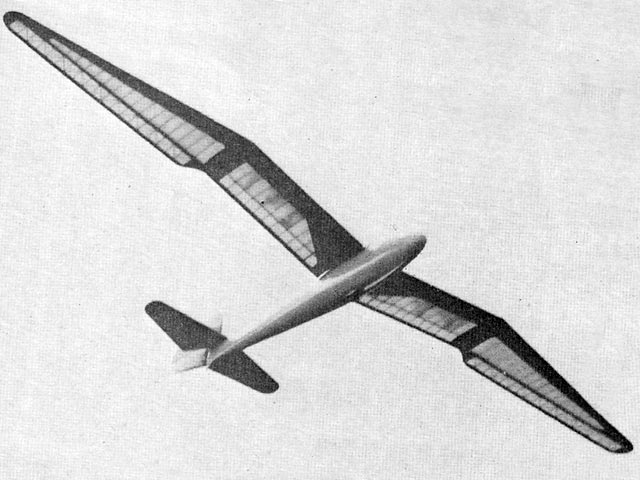