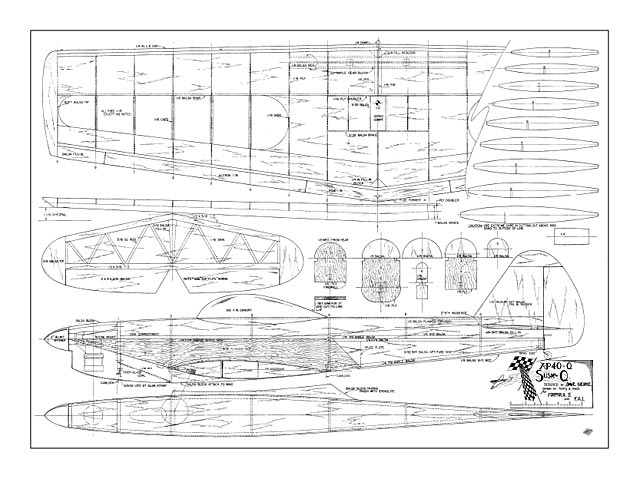 Evolving from the P-40 Warhawk, this little known pursuit flew as a Thompson Trophy Racer. As an FAI/Formula II, it's red hot.

Beautiful indeed, was our first thought when we ran across a photo of the 'Q' in Reed Kinert's Racing Planes of the World publication. Not only is the Q beautiful, but, would you believe, it was also raced? It was a perfect Formula II, FAI subject! But first we needed more information and some drawings before adapting the Q to our racing event.

It took Kent Landefeld and I almost two months to gather and assemble adequate data concerning this little known airplane. Our search ranged from the Smithsonian Institute to the Curtiss-Wright Corporation library. We even contacted a man who worked on the original prototype under the wraps of 'top secrecy'. At this point we learned the nickname given the design by her builders: Susie Q.

In the process of conducting our research, the fabulous story of a little-known airplane unveiled itself into an extremely interesting series of events and ultimate misfortunes. So that we may impart some of the highlights of our research, let us give you the following thumbnail sketch of the P-40Q from a historical viewpoint. The story began in 1940 when Curtiss-Wright began production of a single seater pursuit aircraft designated the P-40. It was a 'hot' airplane and in the years of World War II more than 15,000 P-40's were built at the Curtiss-Wright plants in the town of Tonawanda and the nearby Buffalo, New York Airport.

The P-40 was originally designated to carry a light wing load of bombs and two .50 caliber machine guns. However, as the war intensified and various theaters of operations were entered, the general design and armament of the aircraft was modified to meet changing combat conditions. The P-40's fought for the British as the 'Tomahawk,' for the French as the 'Mohawk,' and for the Americans as the 'Kittyhawk' and the 'Warhawk.' Thousands of these fighter aircraft were sent to the Pacific theater and put into combat against the Japanese.

The P-40 was a deadly competitor. It was faster than the Zero, it could outdive it, and it had greater firepower. The Zero, however, had two maneuvers that the P-40 could not match - it could turn tighter and climb faster. Army Air Corps pilots learned, through grim experience, that they could elude the enemy by diving at full throttle. When a Japanese pilot attempted to follow, the wings pulled off the Zero. But this wasn't enough, and top commanders of American fighter groups were brought home to the United States to make recommendations for the design of an aircraft which would make certain the destruction of all Zeros under any combat conditions.

Consultations between pilots and Curtiss-Wright engineers convinced both that the stalwart P-40 could be further modified to meet the challenge. The result was the XP-40Q, the last of a long line which had taken production models through the alphabet up to the P-40N.

The design and construction of the XP-40Q was done by a carefully selected group of employees in a restricted area of the Buffalo Airport plant. The general configuration of the airplane followed the P-40 silhouette. Its designation, however, was 'nterceptor-pursuit.' The big changes, the ones that would give it the edge over the Zero, were barely visible, but extremely effective.

The section of the fuselage back of the cockpit was lowered and a bubble canopy added to give the pilot 360° visibility. This canopy was the first of the free-blown teardrop variety ever to be used on aircraft. It was powered by a single Allison 12 cylinder, V-type, liquid cooled engine with a two-stage supercharger and water injection. All possible weight was removed from the Q to give it greater maneuverability than any airplane of its class had ever known.

To test the effectiveness of the much-modified P-40, pilots flew it in simulated combat with a Japanese Zero which had been captured and turned over to Curtiss-Wright for this very purpose. Day after day, high above the clouds over the Niagara Frontier, war-seasoned veterans took the two airplanes through the aerobatics they would encounter in a no holds barred aerial dog fight. They proved that the XP-40Q was, in every maneuver, superior to the famed Zero.

Then came the atomic bomb and, after Hiroshima and Nagasaki, the Japanese capitulated, leaving no further demand for a United States designed aircraft to take the lead in the Pacific skies.

Originally flown with leading edge radiators in the wing center section, the Q was progressively modified and, in its second configuration, the radiator was brought forward beneath the nose, a bubble canopy was fitted, and the rear fuselage cut down. In its third and final configuration, the one we chose to model, the XP-40Q's wingspan was reduced, and the wingtips clipped. After the war, Jean L (Skip) Ziegler of Kenmore, New York, obtained the aircraft and outfitted her for the 1947 Thompson Trophy Race at Cleveland, Ohio.

Skip was a wartime test pilot for the Curtiss-Wright Corporation. He dive-tested Curtiss' Helldivers for the Navy, P-40 Warhawks for the Army, and was officially recorded as one of the first three men to fly the Hump from Burma to China during the war, carrying supplies to the American Volunteer Group (Flying Tigers). Three XP-40Q's were built and only one was flown - the other two were destroyed in static structural tests.

Ziegler stripped off all of the military equipment, reducing the fully loaded weight of the ship considerably. The engine was extensively reworked and special high octane fuel was used.

Because of mechanical difficulties, Skip failed to qualify at Cleveland but took off in the finals anyway. He was leading the race in the 14th lap when his engine blew - just after passing the fourth pylon. Skip bailed out and broke a leg, while the wing on the Q tore off the top of a boxcar on a New York Central siding, then struck the ground between cars and exploded, ripping up several tracks. The ejected canopy struck a woman onlooker injuring her critically. Skip was later killed (1952) while readying one of the Bell X-2's flights over Lake Ontario under the wing of a B-29 Mother-ship. The X-2 pre-released unexpectedly, throwing him out of the nacelle into the icy winter waters of the lake.

Four semi-scale XP-40Q's were built during the fall of 1970 and winter of 1971 by Kent and I. They were designed with ease of construction foremost in our minds. The power section of the ship was engineered carefully for simple maintenance and solid reliability. She was designed to be a 'minimum rules' airplane which would fit both the AMA Formula II and FAI regulations. In my case, one ship was a bit 'too minimum', as will be discussed later.

The airfoils utilized in the wing are of the laminar flow variety (64012 - root 64009 - tip), with their excellent lift/drag ratios. Nose and tail moments were a compromise from what I had observed in certain stunt designs over the years. Aspect ratios, stab/ elevator and rudder/fin areas are fairly standard procedure from past experience. Simplicity, plus an eye toward making it look like an airplane, not only a racer, dominated the original theme.

The fiberglass cowl serves two purposes in this design. First, it lends structural strength to the fuselage where it is sorely needed. Secondly, the cowl with its deflective ducting, despite counter claims by a local authority, certainly performs an adequate cooling operation for the ABC Tigre mill. The 'hood' as it has been derisively referred- to, offers few offensive characteristics and has yet to 'fry' an engine as is so frequently the case with the historical 'pressure cowl.'

Of course, the reinforced plastic cowl does add extra weight but, conversely, it maintains CG position plus the aforementioned structural stability..." 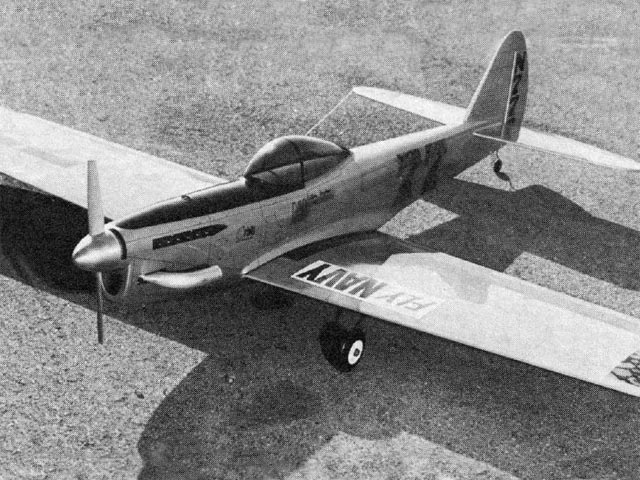