Quote: "Just for a change, try this delta sportster. The Dragon, by Alex Weiss.

In the beginning It was all Peter Russell's fault! I had built and successfully flown one of his 0.25 powered deltas, the 362 (oz10014) back in the middle seventies. This was followed by a two-thirds scale model of this delta some ten years later. Now I felt the urge to test the 'third time lucky' syndrome. There was, however, a snag. The delta would have to be powered by a four-stroke engine in order to give neighbour-friendly noise levels. I'm not saying that adequately low noise levels can't be achieved with a two-stroke - just that I have no suitably sized two-stroke and am not about to go out and buy one.

The design criteria: A quick look at the layout of the '362' showed that it would be a non-starter. Peter Russell has warned and my own experience has shown that deltas tend to end up nose heavy. Now I was faced with replacing a nine ounce (250 grammes) 0.25 two-stroke with a seventeen ounce (480 grammes) 0.45 four-stroke, the size of four-stroke I felt necessary to maintain the performance with the extra half pound (225 grammes) of engine weight. To make matters worse, the weight of my airborne radio pack, which would have to be used to balance the engine, had reduced by three ounces (85 grammes) over the last decade.

It was back to the drawing board and the start of a new design. Thus was the 'Dragon' born. I have stuck to the basic Russell built-up balsa structure, but have given the leading edge a wing sweep angle of only forty degrees, thus significantly reducing the tendency for nose-heaviness. By using a twelve and a half percent thickness chord ratio, the depth of the delta wing will accommodate the larger engine, and the radio can be positioned well aft, but with the servos still upright. You will notice that I have chosen a tall thin fin. This is to ensure good directional stability when the 'Dragon' is operating at high angles of attack. I have used NASA wing tip finlets in an attempt to reduce the very high levels of induced drag found in low aspect ratio delta wings operating at high angles of attack.

I did consider removing the centre fin at the design stage and relying on a steerable nosewheel, driven by the aileron servo, for steering on the ground. However, the risk of aerodynamic problems, and the inability to do a decent slow roll without rudder both inhibited me.

Construction commences: Building the 'Dragon' is remarkably straightforward as the complete aeroplane is constructed as a single unit, yet is still compact enough to fit in the average small car. No more nylon wing bolts with crossed threads. No more fuel soaked, soggy elastic bands. Balsa is used throughout, apart from the engine bearers, two formers and mainleg mounts. My prototype weighed only three pounds thirteen ounces (1.72 kilogrammes), with an empty fuel tank. Not bad when you remember that the engine and radio alone account for half of the total.

The fuselage/wing: Start by cutting out the six pairs of ribs and the single centre one, leading edge, and upper and lower trailing edges. At the same time cut out and laminate F1 and F2 from a sandwich of 1.5 mm ply with 1/8 in (3 mm) balsa in the middle. Next pin the lower trailing edge in place over the plan and glue the wing ribs in place, using small scraps of 1/16 in (1.5 mm) balsa to prop up the rear undersides of the ribs. Add the upper trailing edge and glue the leading edges in place, carefully sliding them into the slots in the ribs..." 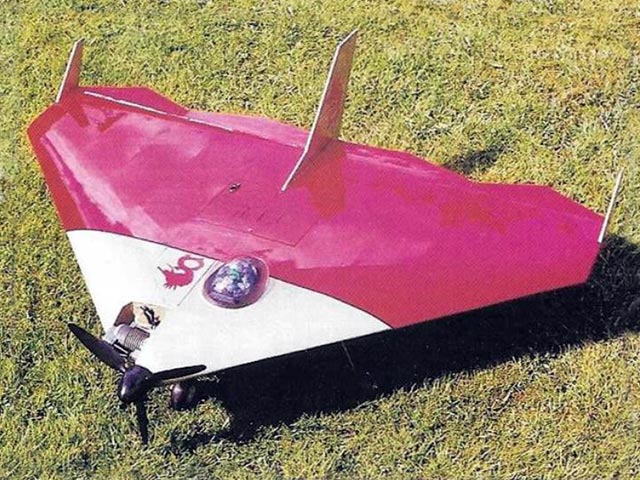