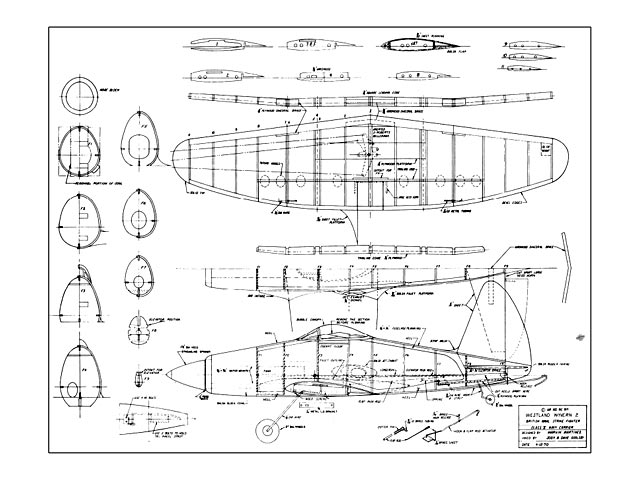 Quote: "Classic class II Navy Carrier that has the ability, looks, and scale advantage to get the high score so necessary to win this exciting control-line competition. Westland Wyvern, by Marvin R Martinez.

There are several approaches to building and flying in the Navy Carrier event. Naturally everyone wants to be a winner and everyone has their own ideas on how to get there. These, then, are my ideas.

First, I should mention that I have been flying this event for the past seven years even though my main love is scale. Therefore, my approach to carrier starts with that idea in mind. The model ought to be as truly scale as possible; however, reliability is more important. It has been my experience that with an airplane that flys well and an engine that is completely reliable, the chances of bringing home the hardware at each contest is very good.

Having been long associated with Ray Theil, the previous Class II National record holder, I know what it takes to have a record breaking plane. And believe me, there are very few people that can do it. Notice, I said people, not equipment. The equipment is readily available to anyone. It is how you use it that separates the record holders from the dreamers. So what happens? After trying unsuccessfully a few times with all that sophisticated equipment, most carrier flyers give up, or even worse, a lot of modelers are scared away from even trying.

This brings us back to my point of view. I know I'll never have a record breaking carrier plane, so I don't worry about it. This means I can pick any airplane I like, using a good reliable R/C engine. With this kind of equipment there is no fear of practicing slow speed and landings every weekend. This also means I'm not afraid of putting a little extra work in the appearance of the airplane itself. Too many carrier models are poorly constructed because they aren't expected to last long. It doesn't have to be that way, which brings us to the model presented here, the Westland Wyvern.

Looking through old MAN magazines for interesting 3-views, I ran across the Wyvern in the December, 1951 issue. With the aid of a couple of friends, further information was turned up on the Wyvern. Used primarily in the strike role, it equipped four squadrons of the Royal Navy's Fleet Air Arm. One squadron, No. 827, operated aboard the HMS Eagle. Squadron 830 used the Wyvern in the Suez campaign.

Using the drawings from MAN, I scaled them up to give a 34 inch wing span. I have been flying the model in contests for the past year in Arizona and California, and it has always brought home a trophy. The main reason is, that she is absolutely reliable. With a well used Supertiger .60 R/C engine, turning a Rev-Up 10-8 prop, and Cox racing fuel, the top speed is 85 mph. However, the slow speed is as good as most profiles. On calm days, 24 mph is a cinch. Even in the wind she will still stay under 30 mph. With this kind of slow speed, landings are also a cinch. Scores are usually in the 450's. Not much when hot rods score over 500 and the National Record is over 600 so you are not first every time, but the odds are that you will usually be second or third. And once in a while, when the wind is shooting everyone else down, you will get a first.

I don't expect everyone to go along with my ideas on flying carrier. So I should mention that if a high performance engine is put into the Wyvern, scores of over 500 can easily be reached. The choice is yours.

One more point I would like to make before we get to the construction. Do a good job on the Wyvern. She will keep you flying for a long time. And if you give it a little extra, you can even pick up a scale trophy occasionally, as I have.

Building begins with the leading and trailing edges. Leading edge is cut from a 3/4 in square. Taper each section as shown on plans. Draw on center line and rib positions. Epoxy both sides of leading edge at outer dihedral break using 1/8 plywood braces. After they have cured, join them at the center with a 3/8 hardwood brace. Pin and block up leading edge so that proper sweep back and dihedral is obtained. After it has cured, cut out notches for landgear ribs. The trailing edge is cut from 1/8 plywood in one piece. Notch as shown, then draw on all rib positions and center line.

Landing gear ribs are shaped from 3/8 x 3/4 motor mount stock. Drill and rout for landing- gear. Also drill holes for leadouts in left rib. Epoxy these ribs in place with leading and trailing edges pinned and blocked up on the plans so that center lines of both are the same height above your building board. Notice that tops of the gear ribs are horizontal to each other.

The remainder of the ribs are cut from 1/8 sheet except for rib number one which is 1/4 in. With wing frame still pinned in position, glue on ribs 2 through 11. Be sure ribs 2 and 3 have temporary cutouts for bellcrank mount. Ribs 9, 10 and 11 will be kind of flimsy so pin a strip of scrap balsa across the top of the trailing edge between ribs 8 and 11. This should also aid in keeping them parallel until sheeting is added..." 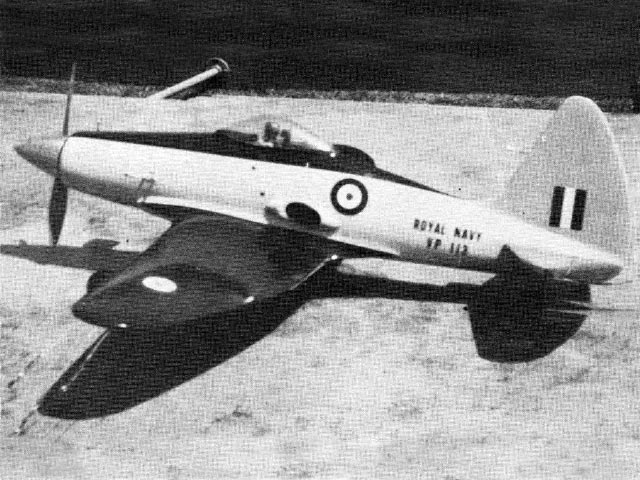