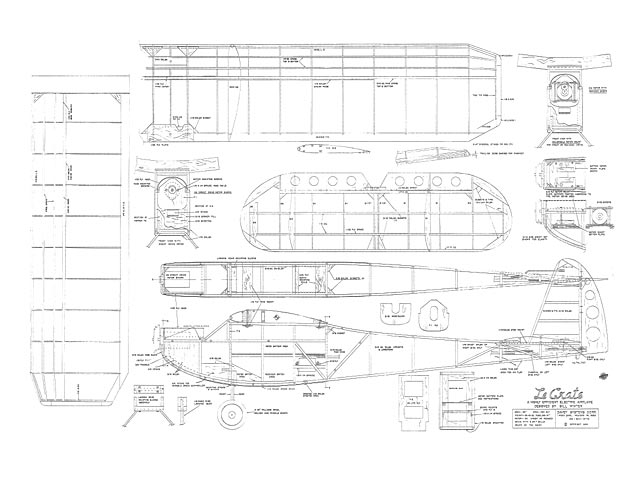 Note this is the cabin version of the le Crate design as it appeared when kitted by Davey Systems. There was also a parasol version, which was published in MA July 1984.

When RCM asked if we would like to do a product review on the Davey Systems Corp Le Crate kit, this reviewer had several reasons for giving an affirmative answer. (1) It would be our first electric R/C aircraft, (2) our first lifting tail, (3) the stick type of construction was essentially the same as what we used as a teenage modeler, (4) the name appealed to us since we came from an era when airplanes were actually called 'crates.'

Well, three or four reasons for doing something can be pretty compelling so we embarked on a most enjoyable learning, building, and flying experience. The 05 electric powered Le Crate was designed by Bill Winter and was published as a construction article by Model Aviation. This kit is a follow-on version with improvements cooperatively designed by Bill Winter and Ted Davey of DSC.

When we opened the box and looked at the design of the fuselage, our first thought was, Good Lord all that seems to be holding the wing on is four butt glue joints. Prudence dictated a little testing to assure ourselves that a little extra 'G' load wouldn't send our radio, gear, batteries, and motor on an earth bound parabolic free flight. A simple fixture was devised which enabled a typical butt joint to be loaded in pure tension. We found the joints to be good to at least 8 G static loading. Thus reassured, we proceeded to empty the box and start our RCM prototype.

Construction: The packaging assured that all components arrived in good shape. The box was not stuffed. As we removed the various components, we examined them and then checked them off against the parts list. Everything was there. The long sticks were of good quality balsa and were straight - which was nice since this airplane is primarily a 'stick' structure. The quality of the lite ply die-cutting was good as was the cutting of the balsa ribs with a small exception. The main spar slots were oversize. This was no big deal since they were easily filled after the structure was completed (about a 15 minute job).

We followed the wing assembly sequence exactly. The only problem we had of any sort was at the junction of the 3 in wide center section and the outer wing panels. Step 12 in the instructions refers to a 7° angle, but no sketch or template was shown on the plans. Since our guess is that most of the modelers who will build Le Crate are experienced, this should not cause any real difficulty.

The fabrication and assembly of the empennage components is conventional with the stabilizer of the lifting tail and the vertical fin being built-up. The elevator and rudder are solid soft balsa with lightening holes.

Construction of the fuselage was fun. First, the curved lower longerons and their doublers were soaked in ammonia and blocked to the correct shape. After they were dry, the sides of the fuselage were assembled by cutting, fitting, and gluing the 3/16 square sticks. By following the sequence in the instructions, we encountered no problems.

Covering: We covered the wing and stabilizer with transparent orange MonoKote. Red and white MonoKote and blue Solarfilm were used for trim. Transparent blue Solarfilm did a nice job on the fuselage. Clear plastic was supplied for the windshield and cabin windows, but since there was no one in there looking out, and we had no reason to look in, we opted for dummy windows of aluminum colored Solarfilm. It was surely a lot easier and it looks great.

Motor: Davey has developed a neat and simple adjustable mounting for the Leisure 05 motor which permits a variety of power plant configurations. We opted to use an Al-Tec 21/2:1 gear box on our motor (2:1 and 3:1 are also available). The motor wiring harness includes an external on/off switch for safety, a fuse, appropriate connectors, and a servo operated micro switch which permits the motor to be turned on and off from the transmitter.

The 7 cell Leisure propulsion battery pack was mounted high in the rear of the cabin (over the servos), to reduce the pendulum effect and to balance the heavy motor/gear box assembly. We were able to balance Le Crate at the CG location called for (48% of the wing chord), without using
any additional weight.

Radio: The radio installation was pretty much to normal practice. The main problem we encountered was due to the narrow width and depth of the fuselage. Tiny hands with very long fingers would help here, but having neither, we had to work with long needle nose pliers and tweezers. We did get the job done, but be forewarned, if you drop a screw in there, you might not see it again for days.

After doing the finishing touches which included putting some Williams Bros 2-1/2 in dia vintage wheels on the landing gear, we turned the radio on to set the control surface throws. What do you know? No elevator or rudder throws are shown on either the drawings or instructions. (This unfortunately is a common occurrence on kits and plans.) We had to guess at the settings for the first flights. We set the elevator at 3/8 up and 3/8 down. Rudder was set for 7/8 left and right.

Flying: After a thorough pre-flight inspection, and the usual range check (motor off and motor running), it was first flight time. We opted for a hand launch. Disaster. We didn't get enough air speed to sustain level flight, so while trying to gain airspeed in a shallow dive, Le Crate and Le rock met. Le rock split open the front of Le fuselage. Nothing else was hurt, so the repair was easy. We returned to the flying field the next morning to try an ROG from the paved runway. This time it lifted off after less than a 20 foot run. Later take-offs from short grass required a 30 foot run. The lifting tail comes up right now which reduces aerodynamic drag thus assisting in a short take-off run.

Trimmed for a shallow climb angle, Le Crate quickly reached 100+ feet where we leveled off for a little cruising flight. It is very responsive to control inputs and tracks nicely in turns. Stalls are gentle and straight ahead. We noticed no tendency to drop a wing or snap. After a nice gentle wheel landing, we recharged and went up again for some fun flying. This time we did some loops and a very slow roll. A few pylon type turns completed our 'G' testing. Le Crate is not supposed to be aerobatic - but, we had to try it.

Conclusion: Our first flight rock bashing, and the above noted flying has proved to us that the structure of Le Crate can take it. Proving that a well designed structure can be both light and strong. Our conclusion is that Le Crate is an excellent initiation into electric flight. For those who enjoy the construction aspects of our hobby, this is an interesting and satisfying project. The flying part is a lot of fun too. Try it, and we feel you'll like it." 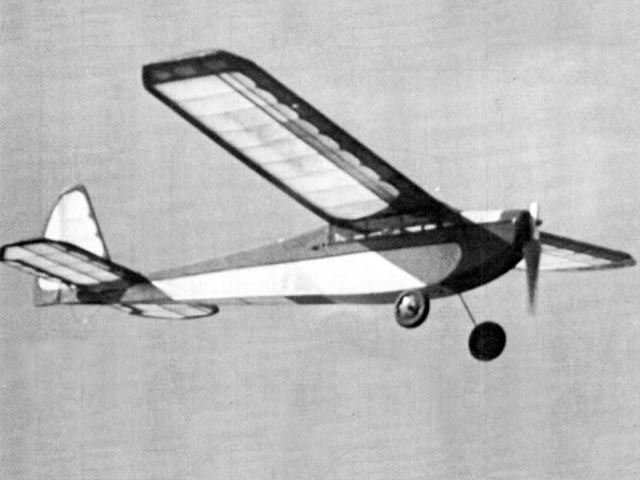