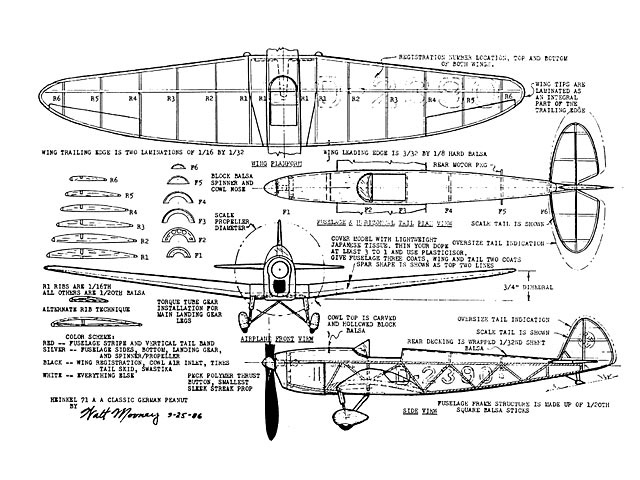 Quote: "A Peanut Scale Construction Feature. Here's a classic German taildragger from the 30s in Peanut Scale by the ol' Perfesser. Colors are silver and white with red and black details. Build it light, and you'll have a good-flying airplane!

This little model has a configuration common to more than a few designs of the 1930s. It is an aerodynamically clean little single place, cantilever winged, open cockpit, low wing aircraft with fixed tail-dragging landing gear. A lot of other companies built similar designs in the same time period. The Heinkel 71A was however, one of the nicest looking of the generation. This is a model of the first one built, (there may have been only one built), so the only real color and marking should probably be the one shown, which matches the only photo of the real one that I have seen. My apologies to anyone who is offended by the swastika on the vertical tail, but that is how the real ship was marked.

The structure of the model follows conventional practice except in one respect. Since the model is small and light, and since so many people feel that ROG is unnecessary for a Peanut Scale, and because the wheel pants are a very tight fit on the real plane, the wheels on this model are made as an integral part of the wheel pants and cannot rotate. This allows a more scale-like appearance, and, besides, helps prevent the model from rolling off the judging tables.

Almost all the good scale modelers I know decry the scale correctness of available three-views. This plan was made up by a Canon copier enlargement of the original three-view, after which, it was copied twice and the parts cut to paste up into the Peanut Scale plan arrangement. This was copied by a Xerox 2080 machine, on vellum, and the Peanut model structure drawn thereon.

It should be accurate; well, yes and no! It's accurate to the three-view alright, but the three-view wasn't quite symmetrical. As a consequence, choose which side of the wing you want to match, I don't know which one is nearest to being correct. On the model shown, the right wing shape was made to match the left plan and it looks fine.

Try to keep your model structure as light as possible. The one in the photos weights five grams exactly, without rubber. All the decoration, except the paint on the propeller, spinner, and landing gear, is cut from colored tissue. (Cops, sorry about that, but the fuselage side lettering was put on using a Pentel white 100WS felt pen).

The fuselage structure is built up using the time honored method of building two side frames over the plan in the side view, separating them when dry, cementing them together at the extreme rear and then adding cross braces top and bottom to form a box. The cowl top and rear decking is then added, after which the noseblock is made and fitted. Then because the model thrust line is very high in the fuselage, all the upper cross braces from the nose to F5 are knocked out.

The wing is built using a laminated outline for the trailing edge and tips. Two different rib approaches are shown. The dihedral breaks are just outboard of the R1 outer ribs. The landing gear uses a torsion bar type of suspension for the main legs. Bend the wire according to the front and side views, and to the plan view of the wings. Don't forget to slip the two short lengths of 1/16th diameter aluminum tubing over the wire, as its being bent, for the torque bearings, which will be cemented to the aft side of the leading edge stick to support the gear. Install the gear in the wing, letting the aft projecting part penetrate the spar to prevent the main legs from rotating aft. Add the rub plate just aft of the spar and between the two center root ribs. This is cut from 1/32nd sheet and is cemented in place flush with the bottom of the ribs.

The tail surfaces are conventional structures built flat over the plan. The outlines are laminated from two strips of 1/20 by 1/32 balsa sticks. The spar and rib pieces are 1/20th square. Note that the tail structure is shown scale size and oversize surface outlines are indicated. (This is kind of the reverse of general practice.) The larger-sized tails which are on the model in the photos will make the model easier to trim out and fly smoother. Cover the model with lightweight tissue.

The base colors are silver on the sides and bottom of the fuselage and white every-where else. Shrink the tissue by fogging it with a mist of water. An old 'Easy-Off' oven cleaner 16 fluid oz sprayer set for the finest spray works well to get the fine mist required; just spray across the surface and let the finest droplets fall as a fog on the surface. Don't get the balsa structure wet if you can help.

When the tissue has shrunk and is dry, give the model parts a coat of thin dope. From red tissue cut out the fuselage stripe for each side and the red band for the vertical tail remembering to remove a circle so there will be a place for the swastika. Using think dope for adhesive place the red tissue in place. Take four layers of black tissue and tape them in place over several layers of newspaper for a cutting surface. Layout the wing numbers and the swastika on a piece of vellum or onion skin paper and tape it in place on top of the four layers of tissue. Using a brand-new blade carefully cut out all four sets of wing numbers at the same time. Use thin dope to hold them in place on the wing. Do likewise with two of the swastikas. Now give the wing another coat of dope and the fuselage two coats. When the fuselage is completely dry put on the white numbers and the small 'HEINKEL' on the sides. Use white paint or a white felt pen as noted earlier.

Now assemble the model and add the details such as: the windshield, tail skid, carved balsa spinner, black felt pen-inked surface outlines and cowl louvers, landing gear struts, wheel pants and simulated wheels. The rear motor peg is a short length of round bamboo. Do not cement the aft landing gear struts to the wing. They should be free to slide for the torsion shock absorption.

The center of gravity of this model should be on the wing spar. A single loop of 1/16th rubber will be adequate power for the model if it weighs no more than five grams. Use rudder and elevator adjustments to obtain a smooth glide with power off, and then use thrust offsets to obtain the flight profile, power on, that is desired." 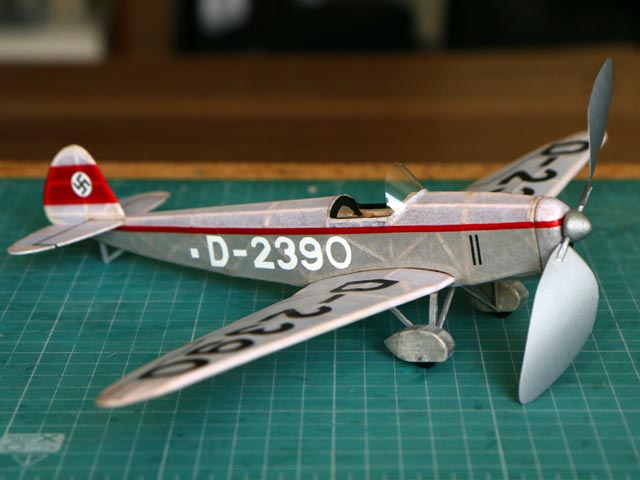