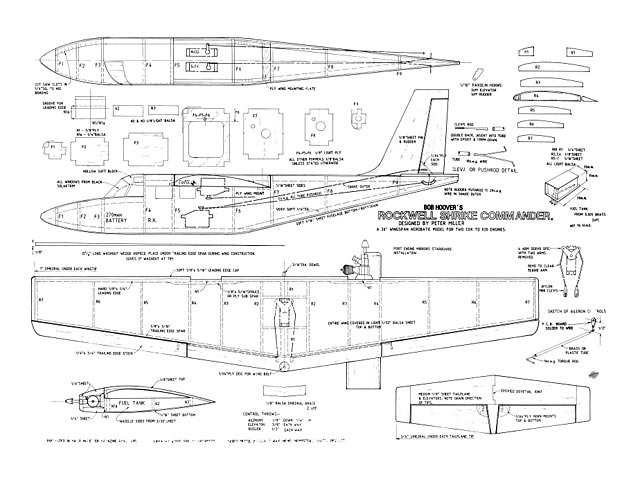 Quote: "26 inches of pure dynamite! Not for the faint-hearted, but this model will provide you with a 'never to be forgotten' experience. Nifty twin for small engines from our full-size pullout plans! Shrike Commander, by Peter Miller.

Regular readers may recall my Aztec Two Step (oz4507) which was inspired by Dave Wilshere's hairy little beast. It was a good model for a first small twin but I wanted something with even more performance and which did not break props quite so often.

Bob Hoover is an American pilot who flies a Rockwell Shrike Commander at airshows. His performance includes aerobatics on one and even NO engines with this Lycoming powered executive twin.

The aircraft has a lot going for it as a small twin - large fuselage, high set engines, fairly simple colour scheme and a proven aerobatic performance. The aircraft does have some snags as a model; the wing taper is pronounced which is an invitation to lip stalling but the full-size has no less than 6 degrees of washout on the wing; the tail has marked dihedral which adds complications and it is impossible to have strip ailerons the full length of the wing.

I obtained a set of photos from Jim Pepino at Scale Plans and Photo Service. (These can he obtained from Scale Model Research in this country) and a small three-view drawing of the Turbo Commander plus specs of the Shrike Commander from Janes All the World's Aircraft. There was no intention of making this a perfect scale model so this material was adequate.

The outlines of the fuselage are accurate but the cross section has been squared up. The tail surfaces are roughly to scale. The wing has much less taper and a slightly over scale root chord; it has 5 degrees washout. Wing area is just over 100 square inches. With the small wing it is vital to keep the model light - the grades of wood are specified in the text so please keep to them. The maximum weight should be 16 ounces, less would be better. Construction is quite simple but care must be taken as the randy' needs to be accurately built to fly well.

Fuselage: Start by cutting the fuselage sides from medium hard 1/16 sheet and then glue down the very soft 1/4 sq longerons. Make saw cuts in the areas of bends to aid bending, fill these cuts with glue. Fit the doublers under the wing seat, noting that the part behind F-6 has the grain vertical to allow the fuselage to bend in that area.

Make up the elevator pushrod. This is made from 10swg aluminium tube, the front end has it short length of clevis rod fitted and the rear has a 'Y' shaped fork bent from 20swg wire. Epoxy these into the slightly flattened ends of the tube and close the extreme ends to hold the wires even more firmly.

Make fresh saw cuts in the longerons to allow the sides to bend to match the plan view and, using F-3, 2 and 1 in that order, join the nose. Thread E-8, 9 and 10 onto the elevator pushrod and make a few dry runs for assembling the rear fuselage, checking that everything -fits and the pushrod works freely. When satisfied with the assembly glue it together.

When the glue has dried, glasspapan the top and bottom of the fuselage with a sanding block to that the sheet will fit perfectly - this is important. Fit the snake outer now - it should be a small snake. The 1/16th sheet is applied with the grain across the fuselage..." 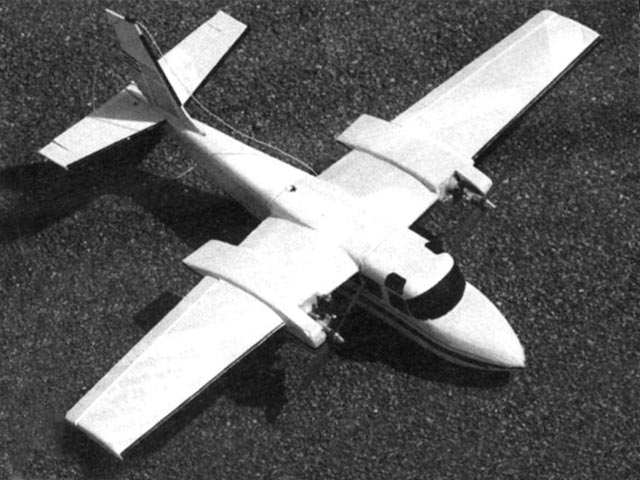