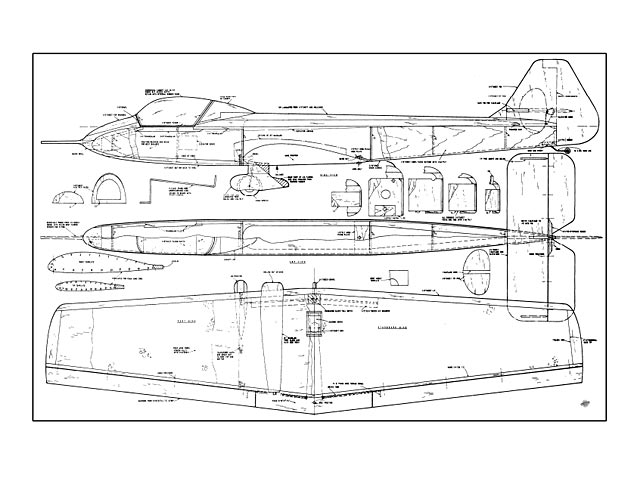 Quote: "LET US HOLD A MEETING for PSS models. After all, club members already possessed some. A Spitfire and a Hunter came to mind, so surely there must be others already in existence or maybe on the drawing/building board.

It soon became apparent that my arguments for PSS would be considerably enhanced if I put my money where my mouth was! But I like something different! Don't I? Furthermore it had to be something quick and easy to build, fairly cheap and especially no jiggery-pokery (or not much) with wing and tail areas, fuselage cross-section and so forth.

After considerable searching I happened on a design which, against all my expectations, fulfilled the requirements. Even more so: how about a twin jet racing aircraft with a fixed undercarriage, which was converted from a piston-engined aircraft also designed as a racer.

Mr and Mrs FG Miles built the M5 Sparrowhawk in 1935 and it was a 'circuit of Britain' King's Cup contest. In 1951-53 Mr. F. Dunkerley had F. G. Miles transfo the aircraft to a light jet racer, again to talc part in the King's Cup and other races. At Shoreham, for example, it averaged 210 mph (5 miles faster than the New Gull in the same race) to place 7th on handicap in the Goodyear Trophy. Later that day in the round-the-aerodrome TBU (Throttle Benders Union) race the Sparrowjet averaged 185 mph into 3rd place.

Anyone interested in further details of this fascinating aircraft will find them as Plan 2292 in the Scale Drawing Plans Handbook, which I enlarged to provide the basis for the model. This model, although scale, lends itself to the almost standard construction of most slope-soarers. The tail surfaces are of 1/4 in sheet balsa, the wings are foam veneer or 1/16 balsa sheet, and the fuselage is 1/8 sheet sides doubled with 1/64 ply, sundry chunks of block or thick sheet are used for nose, nacelles etc.

Construction: Tail Surfaces: You see the results most rapidly here! Cut out from some nice light 1/4 in sheet and sand to a pleasing aerofoil, I leave a square cut trailing edge on the rudder and elevators some 3/32 in thick as an antiflutter measure. The fin and horizontal stabiliser are each half slotted so that they may be assembled and checked with a square prior to gluing. A word about glue. My preference is to use a fairly flexible white glue for most joints and a hard aliphatic one where it will be necessary to sand. (I do use superglue at times for 'spot-welding').

Carefully mark the auxiliary fins location, then position them accurately with the aid of a small square and 'spot weld' them on with a suitable cyano superglue. Drill holes through stabiliser and into fins, dowel on with cocktail sticks or something similar. Hose some white glue around the joint for the long term bond.

Do take all precautions with any cyano glue, use a different glue if affected at all! The elevators are bottom hinged (it looks better when the model is on the ground) and this is best done at or after the covering stage. This hinging also applies if you require a working rudder, although the model is really intended for two function only.

Fuselage: Now here (as they say) is something to get your teeth into. Transfer the fuselage outline onto a sheet of 1/64 ply. Ignore the wing cut-out for the moment. Now get a nice large sharp pair of scissors - and make sure that you are able to resharpen and replace them before they are missed - cut out the fuselage side. It is possible to do this most quickly and accurately.

Now use this first side to mark out the other 1/64 ply side and also the 1/8 balsa sides and cut out these. No, you do not use scissors on the 1/8 balsa!

Using a contact adhesive, such as Copydex glue, stick the ply and balsa side pieces together, ensuring that you finish up with one left side and one right side. The ply goes on the outside. It is convenient to leave the balsa pieces slightly oversize in the nose area to facilitate subsequent shaping. Now cut out the wing seating with a fretsaw after clamping both sides temporarily together.

The fuselage very conveniently jigs itself if you build it upside down, like this: The top rear decking is made from two light pieces of 1/2 x 3 in sheet. Mark the plan view of the fuselage and the position of the bulkheads on the underneath of the lower piece, now mark a line about 1/2 in towards the centre following the outline from the front of the tail unit to the front of the wing. Next cut down the centre line of this piece and cut out the inner section. Remove a 1/4in strip for the fin.

It is now easily possible to razor plane the inner edges to about 45°. Assemble and stick to the top piece and you will find that you now have a hollowed-out rear decking. Do not shape the outside edge at this stage because, if you lay the decking down on its top, you will see that the two fuselage sides will sit on it. The whole lot now being upside down.

Before fixing the fuselage sides to the top decking we need some spacers or jigs. These are very conveniently made by constructing the bulkheads. Each bulkhead is rectangular and is made from 1/8in balsa faced with 1/64 ply. Ensure that these are perfectly square (yes I know that I just wrote rectangular, how about true, then?) because the accuracy of the fuselage will depend on them.

Position the bulkheads B and C on the rear decking and tack with superglue, after checking uprightness with a square. The two fuselage sides may now be offered up and tacked to the bulkheads B and C. Draw in the rear fuselage sides to the marks previously made and pin to retain (now you know why we did not chop off that surplus wood). Tack in the remaining rear bulkheads D and E and use white PVA to glue all joints. Leave to dry overnight and then add the 3/32 rear fuselage floor with the grain running across the fuselage..." 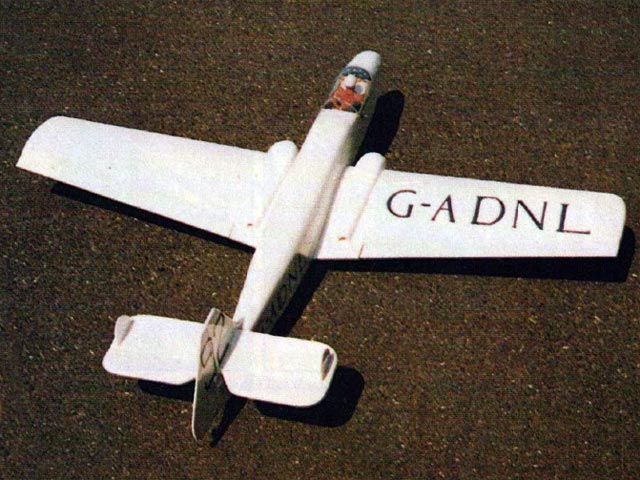