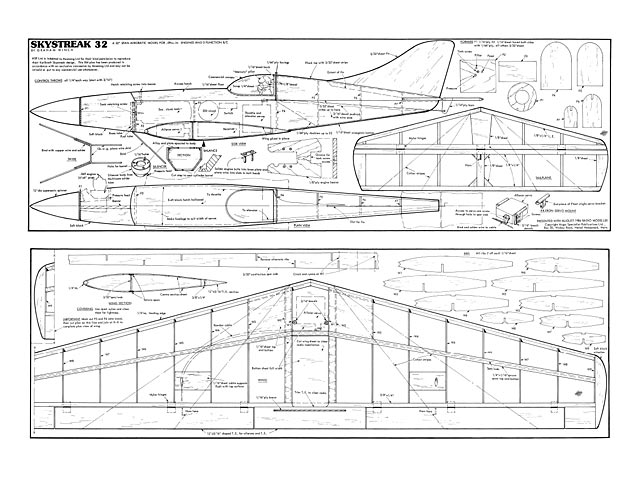 Quote: "One model that impressed me many years ago (life began this year!) was the Keil Kraft Skystreak 40, a control line model made available in basic kit form for 10/6d (52-1/2p) in 1951 (see advert in January 1951 Aeromodeller). Being a member of SAM 35, I managed to obtain plans some time ago but did not decide to build until around Christmas 1985. I had obtained a genuine Keil Kraft 'Supersonic' spinner whilst on holiday in Scotland a couple of years ago (from Scoonies-Kirkaldy) thinking it might come in handy one day, so, when a visit to the local model shop produced a Cox TD .049 for £5, the basis for the model was ready.

Having recently built a Top Flite RC Nobler (oz21) which had a wing loading of 18 oz/sq ft, I decided that a 0.8 full-size version of the Skystreak giving a wing area of 192 sq in would give me a target weight of about 24 oz. A throttle would be an added luxury so a Tarno carb was obtained from Tigre Engines. It took some time to manage to fit in the radio gear, but the end result is I think rather neat. A quick note here about the target weight. At the end of the day the model weighed 20 oz, all up. Engine, carb, tank radio gear account for approximately 12 oz, so basic finished airframe should be 8 oz. Although this does not seem very much it was fairly easily achieved by careful balsa selection and included nylon covering. There is a margin for possible increase in airframe weight if a two channel version is built of about another 2-3 oz. An ordinary set of your normal 500 ma/Ni-cads could then be used.

Kitchen scales were invaluable for keeping an eye on the weight during construction (a trick here is to put something heavy on the scales and then weigh items since these scales are not very good at the bottom of the scale range).

Construction. Wing: First thing to do for the wing is to select a very light 1-1/4 x 5/16 TE section for use as ailerons and a straight/strong 3/8 x 1/4 balsa strip TE. Pin the 3/8 x 1/4 TE to shaped TE and sand the pair to shape. Cut shaped TE into aileron and fixed sections. Cut out ribs from light quarter grain 1/16 sheet. The main spar should then be cut from light 3/32 sheet and slotted to suit ribs, also scored and bent/glued to plan view shape.

Since the aerofoil section is symmetrical and wing has tapered LE, an unusual method of construction was adopted - building the wing not flat on the board but vertically. Pin the now shaped 3/8 x 1/4 TE to the building board after accurately marking on it the position of ribs. Slot the ribs onto the main spar - do not glue. Now pin and glue the ends of the ribs to the TE..."

Quote: "Hello Mary, I built this model in 1987, and it flew well, but I would suggest anyone building it reduces the elevator size as the elevator is far too big for a smooth flight. This plan looks like a scaled down 40 in version so would be a good scale up as all the wing ribs are on this plan. It does tip stall if too much elevator is applied in a turn, apart from that, great and when built this had full size servos etc. Should be a real blast now with modern kit. Geoff" 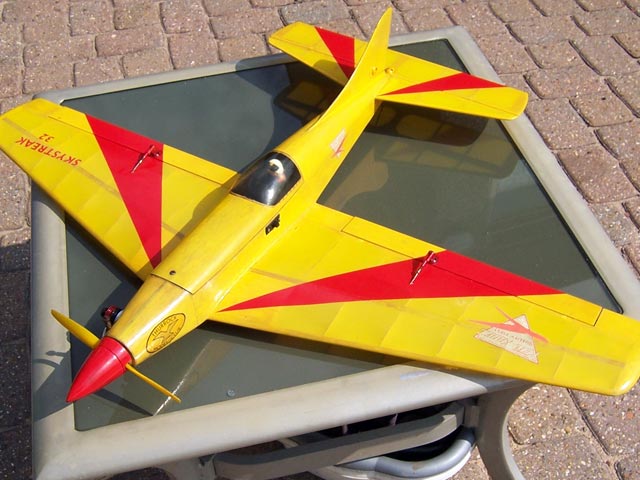 I dug it out of the loft recently and recovered it in Solartex [main pic, 007]. Also fitted 2.4 GHz receiver, smaller battery, different tank and a mini rudder servo. Not flown it yet - too scared, I had more confidence 35 years ago, but the day will come! It weighs 20.2 oz dry.
Graham Winch - 19/07/2021
How did it fly Graham, be interested to see more pictures, did you reduce the elevator size?
Martin Collins - 28/07/2021
Add a comment