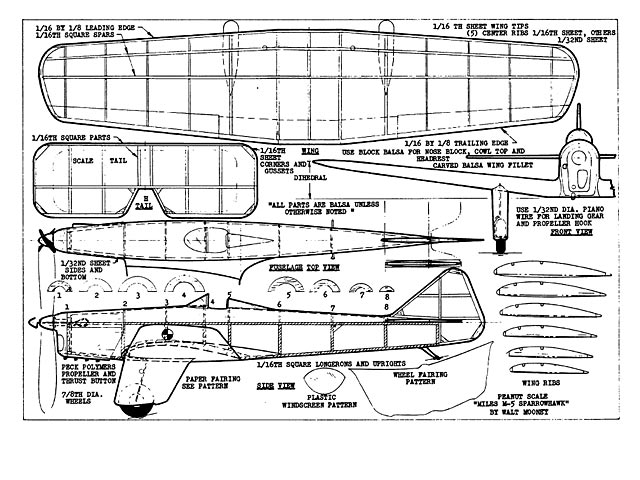 Quote: "Miles M-5 Sparrowhawk. Another 'Peanut' from Walt Mooney's bag for an aircraft that flies for miles and miles.

All of the Miles Hamk series of light aircraft are beautiful low wing machines, so a Peanut scale Hawk was obviously in order. Looking through the three views in Don L Brown's book, Miles Aircraft since 1925 we came to page 91 and a drawing of the Sparrowhawk, the short wingspan of this special racer seeming ideal for a Peanut Scale attempt.

The model shown is covered with Japanese tissue, has a plastic propeller, and with a 14in loop of }in rubber weighs 0.6 ounce. On its first official contest flight in the Santa Ana Blimp Hangar, it did 53 seconds from an ROG launch and this proved to be the best indoor flight it has made ! All my efforts to trim it out for longer duration since then have resulted in shorter flights. The model will do 48 to 50 seconds consistantly indoors, while outdoors the best official time is 1 minute 51 seconds, but of course that is with thermal help.

In the interest of consistant flying characteristics, two deviations from exact scale were made intentionally. First, the dihedral was increased and secondly the horizontal tail area was enlarged.

The CG shown on the plans is the actual flight CG of the model in the photo - with the CG further aft due to a longer motor the model flight becomes less stable and more erratic. Ballast is required if your model turns out tail heavy, although no ballast was required on the original model. The plastic propeller used is not the most efficient one available, so experimentation may result in even better flight duration.

The model climbs in wide right hand circles and glides in tighter right circles. Under the first power "burst" the Sparrowhawk banks to the left and flies almost straight - allowing the model to turn left under power usually results in a spiral dive.

Aerodynamics include a right rudder setting that is just perceptable, and one-eighth inch of washout at each wing tip - the twist in the wing is consistant from tip to root. Elevator trim required will be dependant on motor installed, and the resulting CG position. No thrust line adjustments have been found to be necessary on the original model.

The structure of the ship follows standard model practice - the only item that requires any special care are the wing fillets. These are carved from block balsa to fit the wing and fuselage contours, then the external fillet curves are carved and sanded to shape. After they fit right, and look right, they are made as light as you dare by carving away the excess wood that would be left inside the fillet.

The wing and tail structure is completely conventional. The fuselage is also very conventional: sides built over the plans, box structure, with top formers and upper sheet covering added. Because the thrust line is high, the formers must be cut out for rubber motor clearance. I found it easy to build the box structure complete with cross pieces top and bottom, then add the formers. When the former attachment is dry, knock out the upper cross pieces and then add the sheet balsa upper decking.

The landing gear fairings were made from bond paper - a pattern is provided. Note that the pattern is not quite symmetrical and the bond paper fairings are folded one direction for a 'left' and the other for a 'right' fairing.

I understand the original airplane was coloured cream with red trim and numbers. The model is covered with pale yellow (cream?) tissue and the trim and numbers are cut from red tissue. The propeller was painted aluminium, the types and engine cowl inlets were painted with flat black plastic model paint

Details, such as the headrest, carburettor inlet, exhaust stacks, and tail skid were made from hardwood scraps. The 'pilot' is a plastic head from a slot racing car. Only a head is really necessary, cement it to the head rest. The wind shield is thin plastic with a painted silver frame on its edge." 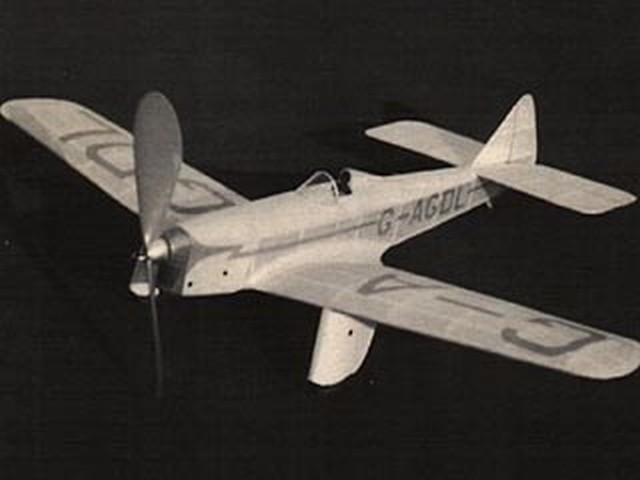