Quote: "Mustang: Tom Stryker's 1/12th scale P-51 - one version of this model is already on Oz as the Progressive Miniature Aviation kit P-51 Mustang (oz11459) plan, but the attached version was distributed free with Model Airplane News at some point (no date shown), and has one or two additional notes/details that would prove useful to scratch builders."

Adding to some of the great confrontations of all times (Ali and Frazier, Roadrunner and Coyote, Donald and lvana), here are two of the most famous aerial adversaries of WW II: the North American P-51 and the Messerschmitt Bf-109.

Modeled to 1 inch equals 1 foot, these aircraft were designed to to compete in the new AMA-sanctioned combat event - 1/12 Scale WW II Combat (see sidebar). Though the P-51 is almost exactly 1/12 scale (37-1/4 inch span), the Bf-109 in 1/12 scale came out ridiculously small (32-1/2 inch span]) so the 5-percent-deviation rule was followed to increase its span to a more reasonable 34 inches, and the stab and fin to a size large enough to avoid them being mistaken for scrap balsa!

Since the planes are designed for combat, their design and finish are as simple as possible. Murphy's law says: He who spends the most time building will be the first to midair! (or something like that!).

Almost identical building techniques are used for both models, so putting them together in one article was a cinch. The wings are fully symmetrical and build up very light. The fuselages use simple 'box-type' construction with a little triangle stock for shaping the tops. There's no landing gear, so hand-launching is used. The radio required is 3-channel (no rudder) with mini-servos and battery.

CONSTRUCTION: Because of the size and limited wing area of these models, careful selection of balsa is a must. Use very light wood for the wing and fuselage and just slightly heavier wood for the tail. Since the two models are built so similarly, all instructions, except where noted, apply to both aircraft.

Wing: The wing is easy to build since, although it's fully symmetrical, it's built on a flat surface. The plans only show one wing half, so two identical wing halves are built over one drawing.

Begin by cutting the 22 degree angles into the 3/16 x 3/8 leading-edge stock. Pin the leading edge (cut slightly oversize), trailing edge, 1-1/4 in aileron stock, capstrips and center-section sheeting to the plans. Do not cut out the 1-inch wide ailerons yet. Secure the bottom spar and all the ribs. Attach the top spar and leading edge to the ribs. (Note: since the inner two ribs on the P-51 are longer, cut the leading edge where it meets R-3, sand the appropriate angle, and reattach.)

Put 1/16 shear webs between all the ribs, securing them to the two spars. Secure the top trailing edge and leading edge and the top center sheeting. Then add the top capstrips to the ribs.

Remove the wing from the building board, and secure the bottom sheeting to the ribs and leading edge. Trim and round off the leading edge. Build the other wing half, making it identical to the first. Note that the ailerons haven't yet been cut out.

Block-sand both ends of the wing half. Roughly carve and attach the wing tips. Do not allow the glue to come into contact with the rear 1 inch of the aileron stock (since it will be cut out next). Round off and final-sand the tips.

With a long straightedge and an X-Acto blade, cut out the 1 inch wide ailerons from the wing center section to the wing tip. Saw the ailerons away from the center-section trailing edge. Hollow out the center sections as necessary, and insert the 1/16 aileron torque rods..." 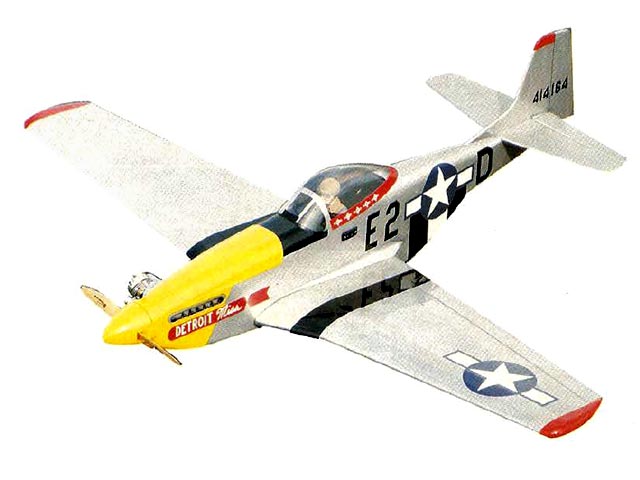