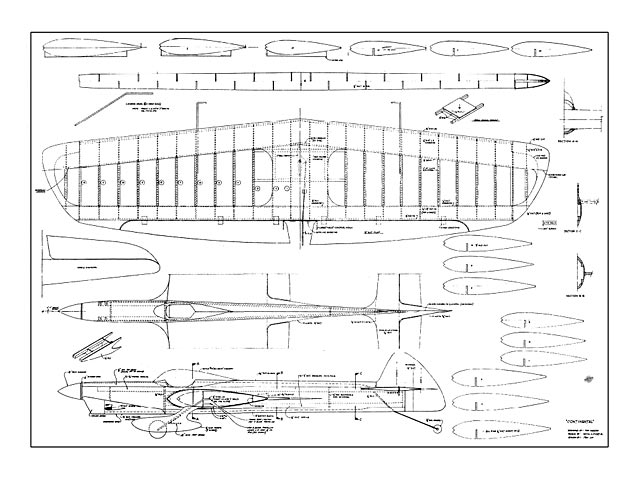 The weather is dreary. The apartment looks bad even by Tom Warden standards due to the start of another stunt ship. Paint is on the ceiling from a recent painting mishap. The bathroom plumbing is leaking. The kitchen table has holes from being used as a drill backing. Balsa is everywhere including the bedroom drawers. The last girl to come over ran away in shock after a Cook's tour of the pad. To put the final touch on my misery, Walt Schroder calls in a panic to tell me that the manuscript of my Continental article has been lost in the Christmas rush.

Bob Baron just happened to wander into this revolting situation when I instantly put him into a top wrist lock and strapped him to a typewriter with no food or soda available until the article was done.

I explained that the Continental was designed primarily to have an appealing appearance to the general modeling public by having a squatty, low slung look. After further prying from Bob, I had to admit that this was really built as a backup to my profile blimp which fizzled because I couldn't get any pro-file helium. Anyway, it probably wouldn't have been able to do the first maneuver (bagover).

With assurances that food would come soon after the completion of the article, we charged ahead in spite of Bob's loud gut rumblings.

Several tricks were used to get the low look of the Continental. First, the landing gear is located relatively far forward and the wheel pants extend well forward of the actual wheel. The canopy and rudder are both low to further create the illusion of a long, low look. The needle nose spinner also contributes to the lengthy appearance. As a matter of fact, the Continental is awfully long - 43 inches for you sports fans.

In an overzealous effort to get this look, I went overboard on the first Continental by putting too long a nose on it. The long nose together with the large leading edge sweep of the wing created a nose heavy plane that could not turn sharply. On the plans, this problem has been corrected by shortening the nose one inch. The original Continental also lacked adjustable lead-outs. This led to such difficulty in trimming the airplane that I felt like burning it. I refrained, however when learned that Los Angeles has a fifteen dollar fine for burning trash.

For a simple adjustable leadout guide, refer to the Humbug article drawing in the Januray 1971 issue of MAN. Bob Baron, when referring to my fixed leadouts, said that West Coasters were still Stone Age. I reminded him that had it not been for the invention of the wheel barrel, the East Coasters would not yet be walking upright. All this jesting was in fun and after only three karate chops, Bob was back at the typewriter.

Construction Notes: I want to talk mostly about finishing, but would first like to mention some construction areas that require special attention on a stunter.

Every stunt construction article mentions alignment as being important. The reason this is important is that a stunt ship does not fly at a constant speed even though it sometimes seems that way. If, for example, the flaps are bent to compensate for a warped wing, this adjustment will only work at one partic-ular speed. When the plane is maneuvering, the bent flap and warped wing will no longer compensate for each other and the result will be undesirable yawing and rolling. Proper alignment of hinge lines is also necessary to prevent the controls from binding or springing.

The first step in correcting 'a warped wing is to stress relieve the structure by very lightly spraying the wood with a 50/50 solution of isopropyl alcohol (rubbing alcohol) and ammonia. Be extra careful to spray on only a very light mist. Let the wing dry overnight in the jig. If the wing is still not true, now is the time to steam and not after the covering is on the wing. Steam the wing over a boiling pot and while still holding bending pressure, dry heat the wing over an electric burner to prevent the warp from creeping back. This technique works on finished .models but takes longer.

The best way to obtain a straight hinge line on any control surface is to use a sanding block. Once the hinging surfaces are true, the hinges themselves must be put in straight. I find it easier to install hinges accurately by gluing only half the hinge at one time. First I burn two holes in each side of a Kavan or DuBro nylon hinge with a hot awl. Next I drill two 1/16 holes the width of the hinge apart and carefully slice out the area between the holes..." 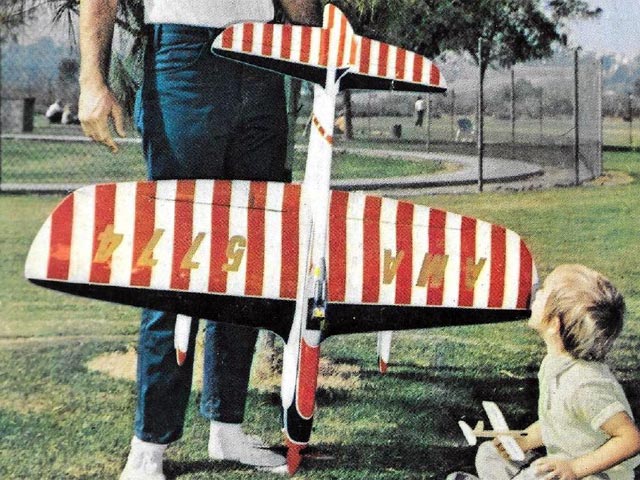