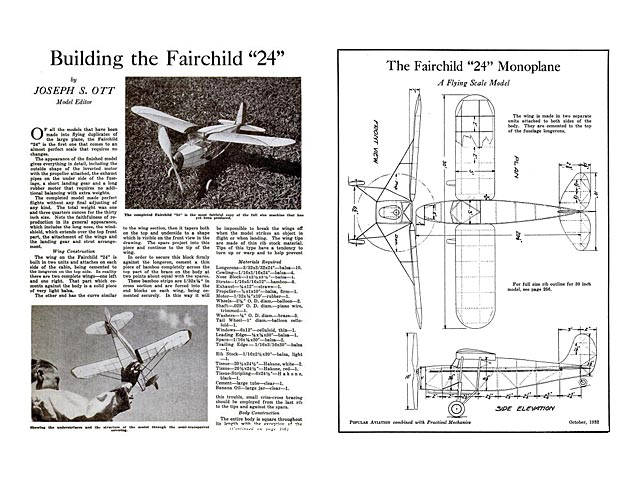 Quote: "OF all the models that have been made into flying duplicates of the large plane, the Fairchild 24 is the first one that comes to an almost perfect scale that requires no changes.

The appearance of the finished model gives everything in detail, including the outside shape of the inverted motor with the propeller attached, the exhaust pipes on the under side of the fuselage, a short landing gear and a long rubber motor that requires no additional balancing with extra weights.

The completed model made perfect flights without any final adjusting of any kind. The total weight was one and three quarters ounces for the thirty inch size. Note the faithfulness of reproduction in its general appearance, which includes the long nose, the windshield, which extends over the top front part, the attachment of the wings and the landing gear and strut arrangement.

Wing Construction: The wing on the Fairchild 24 is built in two units and attaches on each side of the cabin, being cemented to the longeron on the top side. In reality there are two complete wings-one left and one right. That part which cements against the body is a solid piece of very light balsa.

The other end has the curve similar to the wing section, then it tapers both on the top and underside to a shape which is visible on the front view in the drawing. The spars project into this piece and continue to the tip of the wing.

In order to secure this block firmly against the longeron, cement a thin piece of bamboo completely across the top part of the brace on the body at two points about equal with the spares.

These bamboo strips are 1/32 x 1/8 in cross section and are forced into the end blocks on each wing, being cemented securely. In this way it will be impossible to break the wings off when the model strikes an object in flight or when landing. The wing tips are made of thin rib stock material. Tips of this type have a tendency to turn up or warp and to help prevent this trouble, small criss-cross bracing should be employed from the last rib to the tips and against the spars.

Body Construction: The entire body is square throughout its length with the exception of the nose, which conforms to the oval shape seen at the front view. In this front view the largest section of the body is also shown with a small curved section on all sides, which is added to the third station from the nose.

No stringers are necessary, but a few may be added from the nose of the model to the third section. The amount of curve at this point is very small and the paper will lay up against this part and draw itself taut towards the next station to the rear. The angular bracing employed on the side of the fuselage assists in keeping the body very rigid and prevents the twisted motor from distorting the body and cracking the tissue after it has been applied.

The rear station, at the point where the motor is attached around the piece of balsa, is left uncovered on one side. The nose at the tip where the propeller is held in place may be made removable and an S hook can be added to the propeller shaft so that a winder may be used on the motor to assist in securing the maximum amount of turns. The exhaust pipes are made from soda straws and should be held in place with pins and cement, as the wax prevents the cement from drying in a short time.

Tail Unit Construction: The rudder outline is a continuous bamboo and a wide piece should be used piece of bent bamboo. Because of the long length required for the thirty-inch model it will be necessary to tie two pieces to complete the full outline. The inside construction is made with parts left over from the main wing or rib stock material. The parts may be sanded down so that the ribs are less than 1/16 of an inch thick. Angular bracing is employed in the rudder section and helps to prevent the rudder from warping after being doped. The stabilizer outline is also bent when bending rudder so that sufficient material may be had for the left and right side. By using a wide piece and splitting so that two are secured from one bent section, both sides should be exactly alike. At the front end of the stabilizer that reaches into the body a small cross piece of balsa is glued against the last body station in turn against which the bamboo outline is cemented.

When cementing bamboo to balsa allow the bamboo part that overlaps to be approximately 1/2 to 3/4 inch long. This part may be thinned down to decrease the weight, but it takes a length as mentioned to securely hold and prevent itself from tearing loose when receiving shocks and jars. So many connections are made where a small amount of bamboo, even as short as 1/8 inch, is allowed for a lap, which always breaks, off and sticks out at the first little jar.

Tail Skid with Wheel: The tail skid is built of bamboo split in the middle and bent over a flame to allow sufficient room for the wheel to revolve freely. The bamboo piece when finished will look like a fork on a bicycle. A piece of wire may be used for this same purpose. Do not make the tail post too thick when attaching the skid. It is advisable to use some thin silk thread wrapping and cementing securely.

Covering: A combination of red and white covering is employed on the main wing as well as on the tail units. The rudder and elevators should be red and the vertical part and stabilizer parts white.

To increase the distinction between the red and white, making the division line very pronounced, put a 1/8-inch strip of black tissue at the point where the rudder and elevators would normally attach. This black strip is put on with banana liquid.

Good banana liquid will stick firmly and at the same time will not shrink the paper, thereby avoiding wrinkling at the points of connection. The underside may be entirely white.

The main wing is covered in a two color fashion, similar to the tail with the exception that the red runs along the front side, starting at the first rib on the leading edge and ending off at the last rib at the trailing edge. The tip in this case will be white and the rest of the wing the same.

The wheels are red and all of the struts, which are made of bamboo, are lacquered black. The exhaust is painted black. The propeller is finished in silver with red tips." 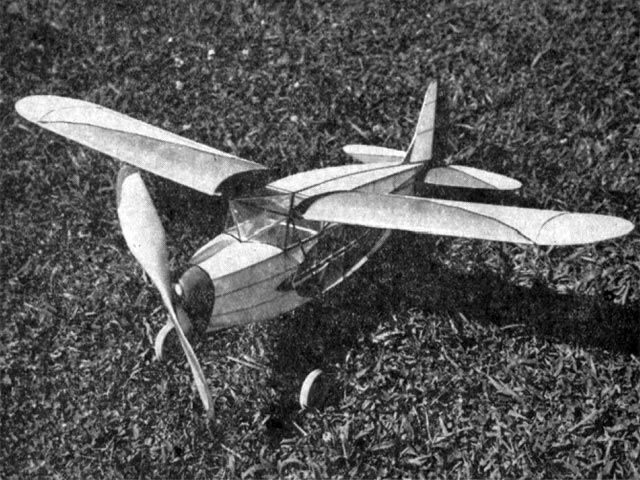