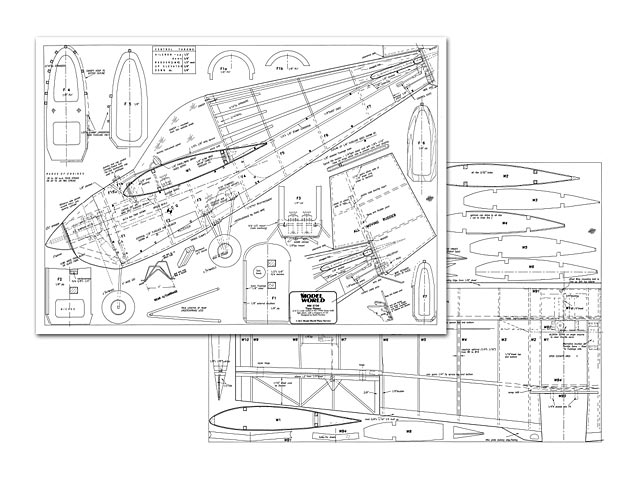 The Tipsy Nipper was designed and built in Gosselies in Belgium, in the middle 1950s by Ernest Tips. With a view to producing a simple cheap single seater sport aircraft powered by a Volkswagen car engine converted to aircraft use. The aircraft retailed at £818 or could be bought as part prefabbed kits for the cost of £375. The first version had a simple open cockpit with windscreen. This was later modified to the enclosed version. Performance was very good indeed for the 40 or so horse power available, with a 95 mph top speed. Plus quite an aerobatic performance all from the little Volkswagen engine. Constructed from an all built up tubular fuselage, all wooden wing with a massive box spar. This of course lends itself very well to modelling.

Fuselage construction: Anyway so much for the design thoughts, and on to the more salient points of the construction. I commenced with the fuselage, all the formers are 1/8 ply with an inner box, fuselage sides are of 1/8 balsa, doubled at the nose and back to the wing T/E with 1/8 balsa on the outside. The 1/8 basic fuselage sides frame up on the formers with 1/8 x 1/8 dummy longerons on the rear fuselage section, to give the effect of a hollow fabric construction. The rear turtle deck are 3/4 x 3/4 'hard' balsa stringers.

The top engine bearer is shaped slightly curved at the rear, to miss the underside wing surface. The wing bolt actually goes through this bearer with a captive nut to retain it. I used a 4mm bolt, any thicker would weaken the bearer too much. I also plated the bearers at this point with 1/8 ply, plus a balsa infill between the bearers to reinforce the mounting. Hopefully this is self explanatory on the drawing. The bearers are 1/2 x 5/8 Beech.

The rear undercarriage is also mounted on Beech bearers, these are quite clever as they also double up as the elevator/rudder servo mountings. The nose leg is a 4 in 8 swg commercial leg, re-bent to accommodate the 2-3/4 wheel, the cowl is blocked in with balsa on the lower section, with 1/8 planking to the top quarter section, with the access sides covered with Litho plate.

The dummy Volks is built up from Litho plate 'fins', balsa spacer sections and plas-tic tube for the exhausts. I fixed mine in place on a Litho 'plate' screwed into position to enable access to the mounting bolts on the bearers. The cockpit is mounted over the wing as an access hatch, retained at the rear with a 10 swg dowel pin, secured at the front with a 2 long screw fixing into a plate. I used a toothpaste tube flip top, cut down and disguised as the fuel filler gauge, in the full-size petrol filler position. It is rather large but certainly looks the part, and it disguises the fixing bolt very well.

The all moving rudder is huge and is certainly a sensitive control. It is pivoted on a 8 swg wire post, bound and glued to a Spruce stern post, the fin has a burred plastic bearing tube for it to move on. I have shown a built up rudder on the drawing, but I must confess I used a solid 3/8 sheet on my model. It certainly worked OK but isn't scale, so the individual builder must choose scale or simplicity. The rudder is held in position with a 16 swg retainer epoxied into the rudder L/E, after covering and fixing in position of course. The tailplane is 3/8 solid sheet glued permanently in place on 1/8 balsa mounting doublers. Internally, an outside for covering purposes. Well that's all there is to the fuselage - simple ain't it? In hindsight, I suppose a glassfibre cowling could be used and the cockpit could, I suppose, be fixed to the wing top surface, still that's up to individual choice, the cockpit might not clear when dismantling.

Making up the wing: Anyway, on to the wing. Construction is again simple, all the ribs are 3/32 balsa capped with 1/16 x 1/4, the spars are 1/4 x 1/4 Spruce top/bottom and dihedral braces made from good quality 1/8 ply. I stress good, because with the open cockpit area you are relying on the braces and the D box to keep the wings in one piece, be extra careful and make a good job of the wing jointing. The L/E is made up with 1/16 sheet top/bottom D box with the T/E made of 1/16 hard balsa. The built up the wing tip ribs are 3/8 sheet faced with 1/16 ply.

The Ailerons are outlined with 1/16 sheet ribbed either side with 1/8 balsa blanks shaped with a razor plane. The hinging is a bit sneaky, I copied the full-size on my model with a parallel 1/16 wide joint, but using a triangular Spruce filler at the centre line, split for the mylar hinges. You could of course top hinge them, as a typical model would be. I have shown either on the drawing, as an option. The dummy step is made from Litho Plate epoxied into position after covering. The rear dowels are 1/4 in Birch, glued into the rear spar wing bracing system. Goes without saying, a good job is needed here. Again, I suppose if scale detailing is not over important, you could purely sheet the centre section right across the cockpit area. The dihedral is set by the braces, should be about 2-1/2 in under the tip, at the centre line (each tip 2-1/2 in).

The cockpit cover is moulded on a Pine male former, with thin temporary double glazing sheeting fixed to a 1/2 ply outline. Fix the plastic sheet to it with drawing pins and use a heat gun and patience to push the moulding, it's not easy but you can do it. Be sure to use gloves because it gets hot!

The model is covered with white Solartex and finished with Humbrol red enamel for the underside of the fuselage. Red Solarfilm was used for the letters and trim on the wing and tail. The whole thing was finally fuel proofed with a coat of Tufcote fuel proofer.

I have used a little bit of modellers licence on my model. The rear fuselage looked rather bare in white Solartex, so I put on a red and white fictional racing number. It is quite possible through OO-NIX's career, she would have carried a similar number and I think it gives the finishing touch to the model.

The flying bit: Flying wise, she is quite lively with the 52 Surpass and I am sure she would fly on 25 two stroke or 40 surpass, as mentioned earlier. The rudder is mighty powerful, the ailerons are OK, the elevator is lively but adequate. The full-size aircraft, with its short tail moment, must have been quite aerobatic, ditto the model! Do keep the CG forward, my model didn't need any balance weight, the CG came out spot on the spar at about 20% to 25%, no further back as she is very short coupled!

She certainly flies well with a very good deadstick landing glide, goes on for ever, so if anyone of you build her, I hope you will enjoy her nippy flying characteristics. I find with the 52 surpass, that most of the time, I am flying on half throttle, only using full power for climbing out and upward manoeuvres. So a smaller engine might well be good combination - try it and see!" 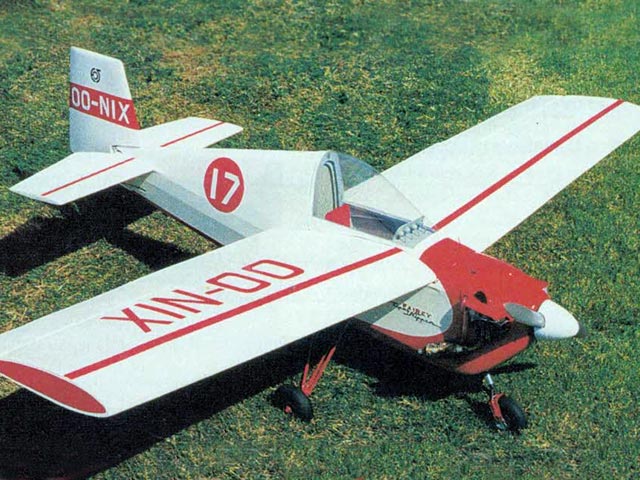