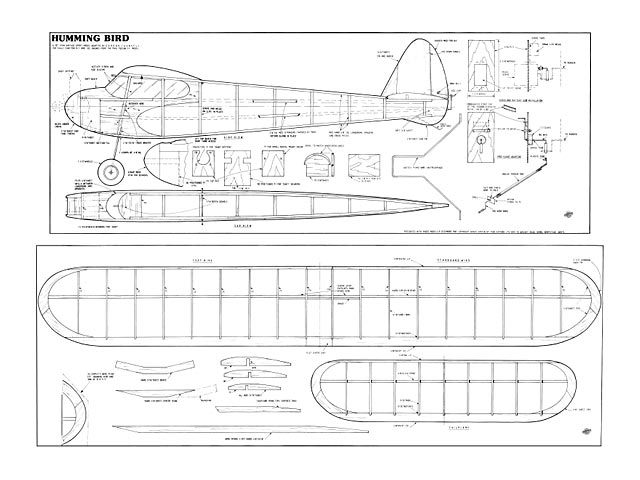 This baby vintage free-flight design by Paul Plecan was originally published in the American Flying Models magazine of April 1950 and is not to be confused with the Colonel Bowden design of the same name. The little model was designed for the then new 1/2A glow motors, an Anderson Baby Spitfire being shown on the plan.

Rather better looking than the same designer's Simplex (oz3073), it bears a distinct resemblance to the much larger Westerner (oz959) by Elbert J Weathers. My version started life as a test model for an Adams Activator, ACE pulse Rx, set-up given to me by David Boddington. In this form, photographs appeared in a much earlier 'Flashback', but the range and reliability of this somewhat aged radio was such that the free flight adaptor was made. The model stayed in F/F form until I bought some Fleet microradio equipment, when Hummingbird was converted to take a rudder servo, Micro Rx and 100 mAh nicad.

This conversion has proved very successful, it now being possible to fill up the tank on the DC Dart diesel used to power the model, and allow it to climb almost out of sight. A long pursuit is then avoided by using the rudder control to land at your feet (sometimes!). Just the thing for the less active vintage flier! If anything, the model is over-powered with a Dart, so would probably be fine with a Pee Wee .020, or G-Mark .03. Any .049 or .75 to .8 diesel would be too much - unless you happen to have an Anderson Baby Spitfire!

Construction: Fuselage: The only changes to the fuselage which I found necessary were as follows:

1) Two short pieces of 3/8 x 1/4 in engine bearer were epoxied to the inside of the cowl extending back to a new firewall positioned at the vertical line on the plan just in front of the cabin's most forward point. The top block was cut back to allow access to the Dart's rear-mounted tank for filling, etc. These modifications are only necessary for beam mounted engines.
2) F6 was made from 1/16 ply, and the wire undercarriage (16 swg) bound and epoxied to it, the whole assembly then being epoxied to a new former in this position extending for the full depth of the fuselage. Make this from 1/8 balsa sheet.
3) A deep vertical slot was cut in a new 1/8in sheet balsa former extending the full depth of the fuselage at the wing trailing edge position. This is to allow mounting of the front end of the rudder-operating torque rod as shown on the drawing.
4) Two pieces of hard 1/16in balsa were glued to the spacers on either side at the centre cabin position. These were fitted in such a way as to form runners for the slide-in servo and battery mounting board.
5) Provision was made for an on/off switch mounting in one of the cabin side windows forward of the battery.
6) The torque rod is located at the tail post in a similar type of split nylon "snap in" bearing as at the forward end. These bearings are made from small pieces of old flexible nylon propeller, drilled to the size of the wire used (18 or 20 swg), one side of the hole being then cut with a razor saw. The wire can then be forced through this slit to lock in the hole.

Wing: The wing was built exactly to plan except for the substitution of the piece marked on the plan 'gusset-hard 1/16' by a 1/16 ply dihedral brace, tapered to a point at the ends, and extending at least one rib out from the centre section.

Tailplane: No changes were made from the plan.

Fin and rudder: This was made from a piece of 3/32 sheet, with a rudder cut from it lin wide at the bottom, a total of about 25% of fin area. The rudder was fitted with hinges at two points. A loop of thin wire was made as shown in the photographs and fastened tightly to the rudder with an 8 BA nut and bolt. This needs to be loosened when necessary to disengage the torque rod operating arm.

Final assembly: The tailplane is glued in place on the rear fuselage, followed by gluing the fin in place over the tailplane centre rib. My tail skid support was made from 1/8 ply and epoxied in place. I would suggest that the wing be located at the rear by a small piece of trailing edge section of a suitable size. I also found it necessary to have a piece of 1/16 ply packing under the wing trailing edges to obtain better penetration.

CG with radio fitted, the Rx being placed forward of the servo mounting board, is best on the main spar. This gives quite a good trim for R/C, the model being flyable in winds up to 7 or 8 knots. All-up weight of my version in R/C trim was 11-1/2 oz with tissue covering.

Flying: Nothing much to say here; the only problem you are likely to encounter is ballooning into wind under power. If the CG is as stated, the best cure is more packing (1/16 at a time) under the wing trailing edge. ROGs are quite possible but the less rudder control during the process, the better. For free-flight I would suggest left power trim, right glide, and you will probably need quite a bit (up to 1/8 in) packing under the wing leading edge. Also a smaller tank! I use an old Davies Charlton 8 x 4 propeller on my Dart to cut down the power. Good luck with your 'Hummingbird' I am still having lots of fun with mine." 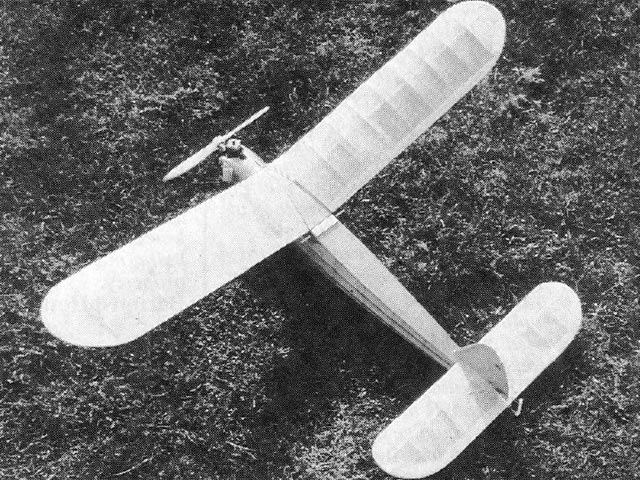