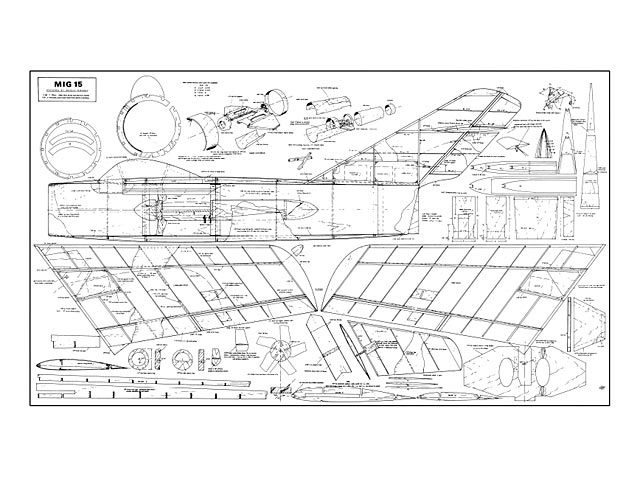 Fan Unit: Although the Fan Unit ie Fan, Stators, Engine mounting-cum-wing tongue assembly, Fan Ring and Rear Ring are expected to be available commercially from Micro Mold (Micro-Mold are tooling-up for this but it may be a few months before it comes on the market), it may be that some modellers will wish to construct these parts themselves. Consequently, I will describe them in some detail.

Engine Mount & Wing Tongue: Commence the assembly of this unit by cutting out the engine mount-cum-wing tongue pattern from 1/4 in resin bonded plywood as per the plan. (This particular mount is designed to suit the K & B rear exhaust rear induction 6.5 engine with tuned pipe, HP rear induction and MAX 40 rear induction motors, but naturally the mount can be changed to suit any engine of the 40 class and all bolt holes drilled accordingly). Carve and sand the streamlined section to shape as illustrated. Glue 1/8 strips of nylon or suitable hardwood below the engine mounting holes to take the engine self tapping mounting screws. These must be fixed securely as they are not accessible when the ducting has been completed.

Fan Ring: Cut a 5 in dia x 1/2 in plywood disc. Drill the centre to suit the crankshaft of the engine to be used (the importance of this will be seen later). Take a strip of 1/32 plywood 2 in wide, bind this upon the disc and mark for a butt joint. Take a second strip of 1/32 ply x 2 in and bind this over the first piece of ply and again mark and cut for a butt joint. Now, using either a whitewood PVA glue, epoxy, or even a cyanoacrylate glue, form a laminated ring upon the 5 in disc taking care to get no glue between the disc and the ring. Allow to dry. Repeat this process for the rear ring (see plan).

Stator Blade assembly: Cut a 2 in dia x 1/2 in plywood disc. Cut out the centre to allow the propeller boss of the engine to pass through. Notch this front mount ring as per the plan and round off the front edges. Cut four 1/8 thick plywood stator blades as per the pattern on plan - sand and file these to aerofoil section. (Note that the camber is opposite hand to that of the fan blades). Notch the back of the stator ring to locate onto the mount. Fit the engine in its mount and affix the stator ring using white wood glue or epoxy (the fitting of the engine first ensures that the prop. boss passes through the stator ring centrally). With the engine still in position fit the 5 in dia disc with the new made fan ring still around it onto the crankshaft of the engine. Mark carefully the points on either side of the mount at which fan ring touches. Remove the ring and disc. Now cut slots into the engine mount at these marked points, to a depth as shown on the plan. Replace the disc and fan ring on the engine crankshaft and glue the ring in position in the slots, Allow to dry. It is most important to keep the fan ring around the 5 in dia. disc whilst this operation takes place as this ensures that the crankshaft of the engine is central in the fan ring, and thus the fan when fitted should run true within the ring. Remove the 5 in disc from the engine crankshaft and remove engine. Replace 5 in disc in ring to hold it true whilst glueing stator blades in position. These are set equidistant around the fan ring with no angle on them. Glue with a good quality epoxy to obtain a very strong bond. When dry, remove the 5 in disc from the ring.

Rear Tank Mount Ring: Cut from 1/2 in ply as per plan. Cut out top half to provide fuel line, pressure feed and filler pipe access to engine when tank cone is mounted later. Fix rear tank mount ring to engine mount as per plan. Take previously made 5 in diameter rear ring, cut a small slot either side of the engine mount at the trailing edge and glue ring centrally in position. Form 1/4 x 5/16 in supports in hard balsa and fit between front fan ring and rear ring either side of engine mount top and bottom; these provide support for the duct shells later in assembly. Make underfairing between front stator ring and rear tank mounting ring from 1/64 ply and glue in position. Sand the complete 'unit' lightly to a smooth finish; dope thoroughly and paint if desired. Do not paint exterior of fan, rear rings, or balsa support pieces as ducting affixes to these items.

The Fan: This is the most important item in the entire model, but not too difficult to make if the instructions are followed carefully. This particular fan design has been tried and tested in many of my most successful models. (It is this design which is expected to be available from Micro Mold in a few months time - Ed.)

The Hub or Centre Boss: It is preferable to use a wood turning lathe, or employ the services of a friendly joinery firm, to turn up a number of 5/8 in resin bonded ply 2 in dia hubs. (I personally go to the local Technical College). At the same time the 5 x 45° angled slots can be cut in the hub to the depth shown, and here it is again preferable to get the work done on a machine. Accuracy is important as it reduces vibration levels and consequently allows the fan to turn at higher speeds without tearing the engine apart..." 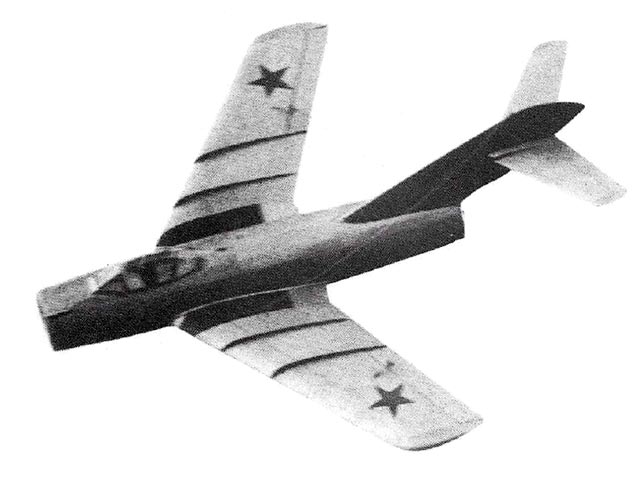