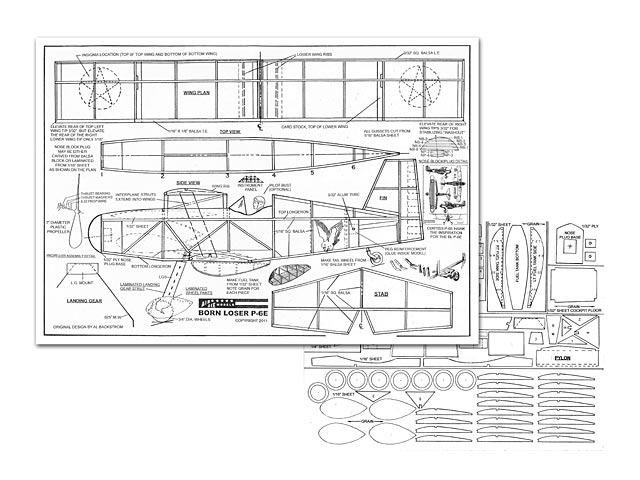 The original Born Loser (oz1231) design by Al Backstrom was published in October 2000 Flying Models. This here is a later modified version by Dennis Norman, with Curtiss P-6E styling.

This plan is a free download from the Model aviation site at https://modelaviation.com/bornloserp6e where it appears along with detailed build instructions.

Building Instructions: Preliminary Steps. Begin by taping the plans to a soft, flat, building board (ceiling tile or something similar). Cover the plans with wax paper or some suitable barrier to prevent damage from glue spills, etc.

Building the Tail Surfaces: The classic warm-up technique is to build the rudder and elevator, using straight pins to hold the components firmly against the plans. To avoid weakening the structure, place straight pins around (not through) the strip stock.

When the glue for the rudder and elevator is dry, carefully remove the pins and gently lift the components from the plans. This is most effectively done by sliding a thin piece of metal between the balsa structure and the wax paper-covered plans.

Once removed from the plans, any excess dried glue should be cut away from the joints. Components can be rounded with sandpaper, but this step is optional for a model of this size and fragility. Having built the rudder and elevator, set both aside until ready to cover.

Pin hard 3/32-inch square balsa strips against the plans for the wing's leading edges LEs). The trailing edges (TEs) are made from 1/16 x 1/8-inch balsa strips.

Elevate each half of the top wing by placing a piece of 3/32-inch scrap under the tips of the TEs on either side. This will create a stabilizing warp called washout in both sides of the upper wing. When building the bottom left half of the wing (pilot's left), elevate the tip of the TE 1/16 inch using a piece of 1/16-inch scrap..." 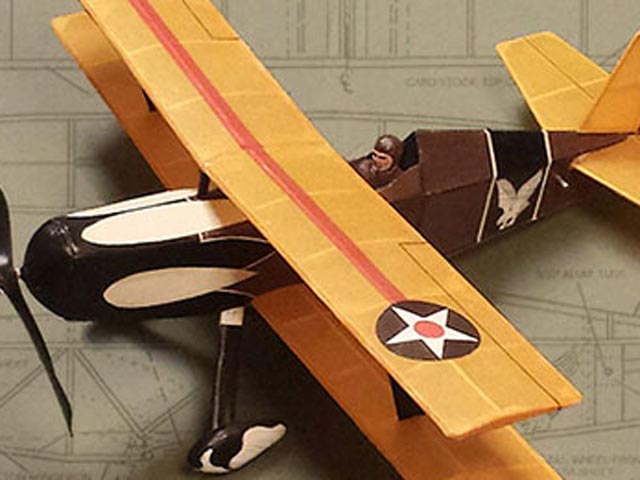