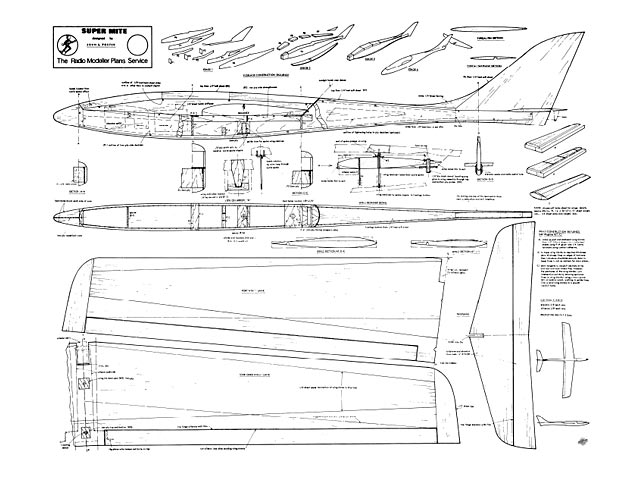 Quote: "SUPER MITE is a compact solid balsa wing aerobatic soarer which, despite having an impressive all round performance, is easy to fly. The new model was inspired by a desire to produce an updated version of the short wing Poltergeist (oz9514) requiring less concentration to fly and capable of a more consistent performance in turbulent air than its short wing forbear. The new design had to be capable of fitting, when assembled, into the boot of the average family car, or on its parcel shelf when dismantled. This would give the enthusiast scope to take a model along when touring or on holiday with his car loaded with family and luggage.

A number of features were introduced into the design of Super Mite to give it ease of piloting, and consistent performance. These were:

The wing aerofoil was designed and developed especially for Super Mite to give versatile performance including good light lift and reasonable inverted flight capability. The use of a wing leading edge which is sharper outboard than inboard assists handling and performance when 'scratching' in light lift.

This model employs two function radio, ailerons and elevator, driven by midget servos and a third function for a rudder could be introduced to improve the model's stall turn and knife edge manoeuvre capabilities. However, the fuselage would have to be increased in size and weight and Super Mite's light air performance would suffer accordingly.

Its rate of roll has to be seen to be believed, for its low aspect ratio wing coupled with full span ailerons give it about the fastest roll rate on the slope. It is also an aerodynamically clean model, which assists its speed potential and also minimises its loss of speed through manoeuvres. The model's efficient streamlining is born out by its quietness in a high speed pass. Thermalling capability is quite spectacular and in marginal lift conditions, when most kippers go to ground, Super Mite will stay airborne, good control response remaining whilst clost to the stall. An inherent nose down pitching tendency and mushy stalling characteristics assist lift scratching ability. I have found great delight in thermalling Super Mite to as great a height as is possible, subsequently diving the model to its terminal velocity before executing a string of manoeuvres. The model has shown itself to be free of structural weaknesses and flutter which would put a damper on such philanderings.

The rigid connection of wings to fuselage coupled with the weight saving construction of the fuselage tend to make the fuselage susceptible to damage during hard landings. Modellers doubtful about their landing abilities would be well advised to add some strength to the fuselage in the interests of increasing its crash resistance. Readers who have built and flown Poltergeist and found it fun, should find Super Mite a real humdinger capable of giving more pleasure than many larger, more complicated and more costly models.

Construction: The construction of Super Mite is relatively simple and should present the basically experienced modeller with few problems if any. Don't be put off by the prospects of building a solid balsa wing, the now well tried and tested concept is found by most people to be much simpler than they at first imagine. The speed of construction and ease of repair of the solid wing are just about impossible to beat with other means and materials of construction. The May 1979 edition of Radio Modeller gives a detailed description of the construction of the solid balsa wing [see additional article file].

Cut out the wing blanks from soft 1/2 in balsa sheet and assemble each wing panel blank individually using white PVA or equivalent adhesive. Do not attempt to join the two wing halves together until the final shaping to the aerofoil section is complete. Remember to spread the PVA adhesive very thinly to avoid a hard surplus residue of glue forming which will tend to damage the blade of the razor plane when an attempt is made to shape the wings.

Prepare the 1/4 in thick soft balsa laminate and add this to the top surfaces of the wing blanks using contact adhesive. Again spread the adhesive thinly and ensure complete adhesion at the edges of the laminate to avoid the balsa at the glue line tearing when razor planing... " 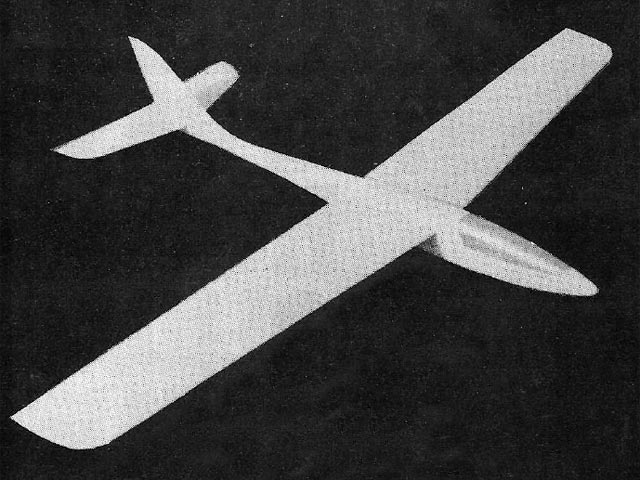