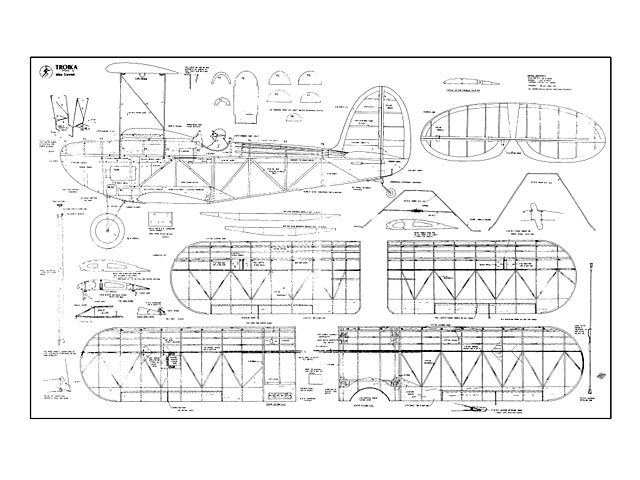 I think that the most annoying part of producing a new design is thinking of a name for it. One puts so much effort into the design and construction of a new model that just giving it any old name really isn't good enough.

The name Troika, which means a combined effort from three different sources, emerged after sounding out club members, family and other disinterested parties, as the only suitable name which had sufficient class and came off the tongue easily.

Now, why build a sports Triplane; haven't I got enough troubles? Well, this is my 90th radio model, so it had to be something special. I've built and flown biplanes of all shapes and sizes so a tripe it had to be.

The trouble is that when one thinks of constructing a three winged model, one feels it might be silly not to go the whole hog and build a Fokker or a Sopwith. Well, I have not got the patience for the fine detail required of a scale model, and I also wanted to start with a clean sheet without the constraints of having to make it resemble a known shape.

The other factor which would put me off a scale Tripe is the difficulty of making it easy to assemble on the flying field. This is important to me, as when I get to our patch I like to fly, not spend hours putting models together.

Concise construction: This is a model which could be built by anyone who has a couple of biplanes under his belt, but it is not a beginner's model.

It will be seen from the plan that the wirework allows for fore and aft, and up and down movement of the centre wing. Bend the elongated U pieces to shape and bind piece 'A' to the cabane uprights loosely enough to allow up and down movement. Bind piece 'B', which plugs into the wing, to piece 'A', again loosely enough to allow fore and aft movement.

After building the top and bottom wings, attach them to the fuz and make up the struts. Run the completed struts through the centre wing as shown, and attach clothes pegs to the strut..." 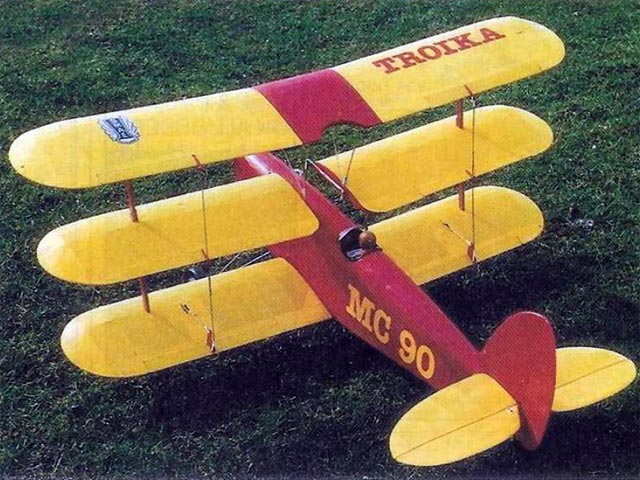 Hi, I've been looking for this plan for years having seen it as a young boy and never being able to afford the build. I'm about to do a print of the plan but would like to check scale isn't off. Have you got a large true dimension that you can take off the plan so that I can check.
Thanks
John - 09/03/2020
See KB article https://outerzone.co.uk/knowledgebase/entry.asp?ID=106 for help on 'Checking the scaling of a PDF plan'. With this here plan, the wingspan is 47 inch, so a half-wing will measure 23-1/2 in.
SteveWMD - 09/03/2020
Add a comment