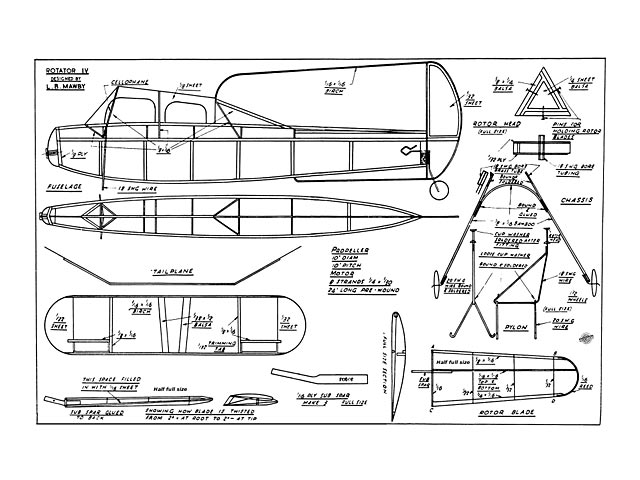 Quote: "Rotator IV, by LB Mawby. Full-size scale plans of this model are printed in the centre pages of this issue. 10s 6d will be paid for the photo of the best looking plane built to these plans which is received at our Leicester offices not later than October 31st.

The Rotor: THIS is, of course, the most important part of the whole machine. Before starting the construction it should be noted that the drawing shows the view from beneath in plan view and from root end in end view. The rotor rotates clockwise when viewed from above (the construction is clearly shown in the drawing). The sub-spars, which are glued to spars of blade, are inserted in the slots in rotor head, and small pins retain blades, preventing them from flying out when rotating.

The easiest method of putting wash-out into blades is to build flat, cover with tissue, dope underside, pin down with drawing pins at corners A, B. and C before dope has tightened, push a piece of balsa 3/16 in thick under corner D, then dope top and leave to thoroughly tighten. When dry it will be found that wash-out is right.

Fuselage: This is built in the usual manner. First make two flat sides. Build up by glueing in nose former and sternpost first, then the longest top and bottom struts all the other struts can then be glued in. Top stringer is next. On to this is glued the1/8 in decking piece and the slanting decking struts.

Fin: Steam to shape 1/16 in square birch. Push front top end into decking piece and glue. Glue to sternpost and appropriate bottom strut. The 1/32 sheet rudder is then fixed with passe-partout binding to sternpost.

Cover fuselage and fin with tissue. Fin is covered on one side only and not doped. Dope fuselage and cover cabin with cellophane.

Tailplane: This drawing is self-expIanatOry. Trimming tabs of 1/32 sheet are hinged the same way as rudder. Cover one side only. Do not dope.

Assembling and Testing: Slip rotor head on to pylon, solder on cup washer to keep on. Insert sub-pars in rotor head and fix in pins. Place pylon over fuselage; put rubber bands over hooks on one side; draw under fuselage and loop over hooks on opposite side. Slip tail-plane through the opening on fuselage and fix with rubber hands. Push tubes on top of chassis on to protruding ends of wire chassis saddle at bottom of fuselage. Insert motor and fix nose-piece and propeller.

Wind up motor about 200 turns. Stick a large pin in nose-block to prevent propeller turning. Tie a piece of thread to top of pylon and support machine by thread. Suptorted like this it should hang nose dawn to the same amount as there is back tilt to rotor. That is the rotor (not the machine) should balance even. When it does so, remove pin from nose-piece and, holding propeller with one hand, hold up machine into wind until rotor is revolving, then release propeller and launch (gently or sharply according to strength of wind). Machine should fly forward and downward on even keel. If it does so, gradually increase turns to maximum. NOTE - This machine does not twirl around at the end of flight."

Note this plan was extracted from the magazine scans at https://rclibrary.co.uk/title_details.asp?ID=1541 thanks to KevinBranch, ZoeQuilter, Mary.

Update 28/01/2020: Added Competition Photos pdf, thanks to Mary. This is from Aeromodeller Feb 1941, and shows the 3 winning entries sent in by builders of this model. 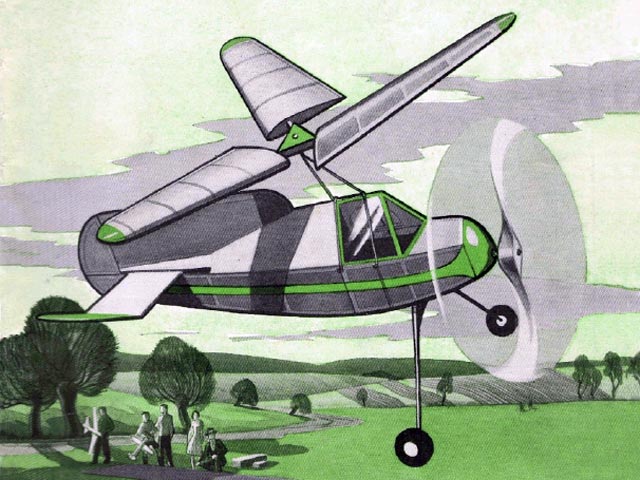