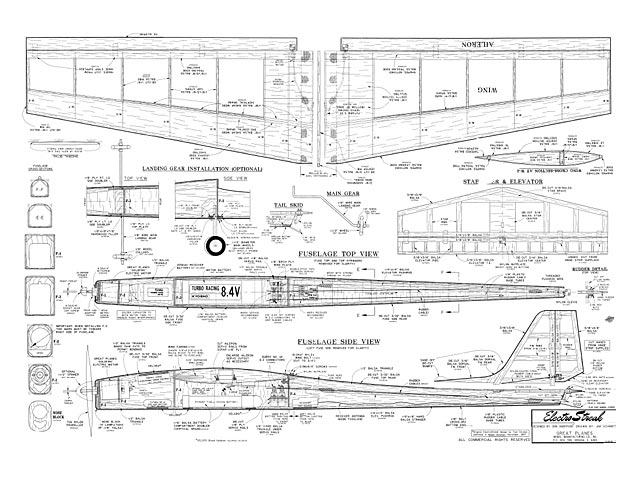 The original Electro Streak design was by Tom Stryker and first appeared in Model Aviation Nov 1987. This here is the plan as it appeared when kitted by GreatPlanes.

Quote: "Hi Mary and happy new year! Attached is the first result of my Christmas holiday scanning - plans for the discontinued GreatPlanes 'Electrostreak' kit. As a large single sheet, needing over 18 A4 scans I think it's come out OK and I hope it's usable :)

The Electrostreak was originally designed by Tom Stryker and featured in November 1987 Model Aviation... it was kitted the next year by GreatPlanes. A 44 in span aerobatic model designed for 550 motors and 7 cells (GreatPlanes own Goldfire motor was included with the kit, the equivalent of a 7.2V speed 600 or the Simprop power speed 660) the Electrostreak is a fine exercise in minimal design, the lightweight air-frame offsetting the heavy motors and batteries of the day to give excellent performance.

I built two of these back then and they were well worth it, the only issue was the tendency for the battery to batter its way through the fuselage bottom on heavy landings. Modern builders would avoid this issue with lightweight LiPos and improve performance too. I would not recommend overpowering this model - use the original brushed motor if you can find one or an inrunner of about 140W will do.

I've included box scans, the manual (from the GreatPlanes website) along with high res scans of the parts templates from my own hard-copy of the manual, plus a couple of other images. I should state that the GreatPlanes version is only slightly different from the original and the minor changes are all improvements!

Lastly, the model was discontinued in this form around about the new millennium but lived on for a time in ARF form with a glass fuselage - often wrongly reported as an electric glider after this, the design soon sank completely. In my eyes a shame. Now it might live again on OZ! All the best,"

Quote: "Electric-powered models have proven they can fly for extended periods of time, go fast, and climb with authority. This model combines all three in a go-for-broke aerobatic configuration that changes opinions about Electrics wherever it is flown. For four channels and 05-sized motors. Electrostreak, by Tom Stryker.

The first time I arrived at the local flying field with this model, I attracted a little attention when I took the littl eplane out of the car and attached the wing. No one at our exclusivley glow-powerd-model field noticed when I obtained the appropriate frequency pin and preflighted the craft.

A few heads turned, though, when I silently walked to the flight line, faced into the wind, and lifted the plane over my right shoulder. With the sound of a few four-strokers flying in the background, the Electrostreak could not be heard at all as I launched it and then let it gracefully climb to altitude.

Soon every eye there was on the sleek little plane as it began performing loops, rolls, snaps, spins, and hammerhead turns. Comments could be heard like: Wow! What is that? What engine is on that? I don't hear anything. Is that Elec-tric? I don't believe it! I didn't think Electrics could perform like that!

I too used to be skeptical of electric powered flight. Having never seen one fly, I had just accepted the well-known 'facts' like: They are too heavy. They don't have enough power. They don't fly very long. It wasn't until I built and flew the Electrostreak that I disproved all of those statements - both for myself and for everyone else who has seen or flown it.

When I first considered building an electric-powered aircraft, I began with a fact-finding mission to the local hobby shop. There I found a good selection of Leisure systems that had been relegated to an inconspicuous location because of low local interest. I was surprised at how reasonable the cost was. For around 55 bucks I bought an 05 direct-drive motor, on-off switch, and a six-cell 1,200 mAh battery pack. Another $30 later for a fast-charger, and the propulsion system was complete.

I needed an airplane that would fit my requirements. It had to be fully aerobatic, so four-channel controls were needed. It should have no landing gear (to reduce weight and drag), and it should be easy to hand launch - so a shoulder-wing layout was chosen.

Additionally I wanted to avoid those unsightly cooling holes in the bottom of the fuselage that are common in most Electric designs. Thus I devised a flow-through system in which the air is forced just below the spinner to travel completely through the fuselage and exit under the elevator. A semi-symmetrical airfoil was desired, so a Jim Denaro Taper Ace was employed in draw-ing each rib for the tapered wing planform.

Construction goes very quickly, as there is less to do with this model as compared to one which is glow-engine powered. There is no major reinforcement needed and no landing gear mounts to build. The Electro-streak is built entirely with medium-viscosity Super Jet cyanoacrylate (CyA) adhesive, and (naturally) no fuel-proofing is necessary.

An important first step prior to beginning construction is a trip to the local hobby shop with your postal scale in hand. Each piece of balsa you select should be as light as possible, the only exceptions being the 1/8 and 3/16 sheets used, respectively, for the wing spars and stabilizer parts. All of the 1/16 balsa is very light four- to six-pound contest grade (this can be obtained from Sig Mfg Co or Lone Star Models).

Begin wing construction by cutting out the 1/16 wing ribs. The plans show holes for use with an A-Justo-Jig, which works well with this model. Some type of jig is a must to ensure a true, unwarped wing. If you use an A-Justo-Jig, align each rib and add the top spars and leading edges. Then attach the trailing edges and sand them to conform with the taper of the ribs. Add the top lead-ing and trailing edge sheeting, then the center sheeting and the cap strips. Remove the wing from the jig and install the bottom spars.

Attach the shear webs, being sure each one is securely glued to both spars and fil-leted to the ribs on either side. Notice that the webs on the front of the spars only extend to R-4, while the rear ones extend to R-6. Also note that the grain of the front webs runs parallel with the spars and the grain on the rear webs is perpendicular to the spars.

When you are satisfied that the shear webs are securely fastened, add the re-mainder of the sheeting and cap strips to the bottom of the wing. Attach the 1/16 wing tips to the end of each wing. Finish by carefully shaping and sanding the wing leading edge.

Cut out the 3/16 wing center section and trial-fit the 3/16 wing hold-down dowel. Remove the dowel and attach the center section to one wing half. Then very carefully glue the other wing half to the center section, being sure both sides are lined up perfectly and there is no dihedral. I use Super Jet for this entire joining process and so far haven't had any problem with its strength - but you may prefer to use 5-min epoxy to give you time to make adjustments before it hardens..."

Update 02/02/2020: Added alternate plan, this one includes all the rib templates, thanks to RFJ. 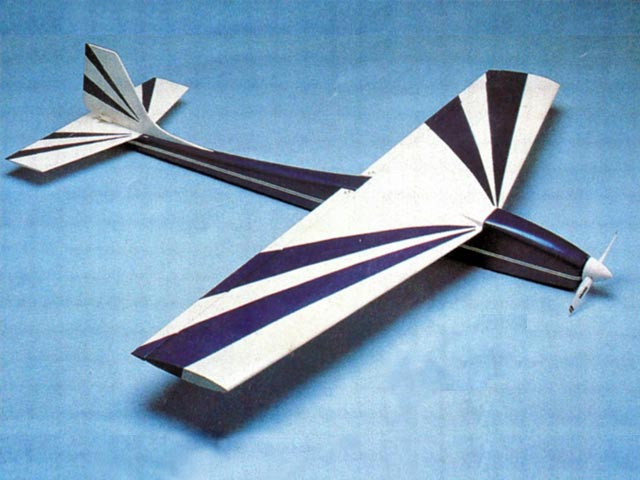 At the time this model was marketed (loosely) as the more advanced of a pair - you started with the Electricub and moved to the Electrostreak. I wonder if anyone has the Electricub plan to complete the duo?
RMC - 27/01/2020
Hello Steve and Mary, Please find here a photo of 'my' Electro Streak [more pics 009]. Actually it has been given to me by a flying buddy but I've restorated it to a brushless setup. SK32836 kv=1500 motor, with a 7x6 prop, 30A ESC. Initially I thought I would fly it with a typical 3S 2200 mAh, but since the original model has a really long tail to overcome the weight of the brushed motor I've fitted it with 3S 3700 mAh. Which gives me a flight time of 15 minutes on full power. For cruising around it lasts at least 30 minutes.
First comment of my flying buddy after seeing the performance: "What have you done with my plane?"... Much more power, lighter. Not ballistic, but more than enough power to fly through all kinds of figures.
Dries - 28/01/2020
What about all of the rib airfoils? I don't see any ribs shown on the plan except for the one. Is there a way we can get those.....otherwise, this plan can't really be used to scratch build one of these gems.
thanks
flygilmore - 31/01/2020
Check the supplement instructions pdf (see page 5) and also the additional 'printwood' pdf file, which has been enlarged from those parts ID drawings. That should be enough to get you started, but if anyone out there can submit a really nice drawing of the rib templates at full size, we'll happily add that to the plan.
SteveWMD - 31/01/2020
OK, done. See alternate plan, thanks to RFJ, for the rib drawings.
SteveWMD - 02/02/2020
Add a comment