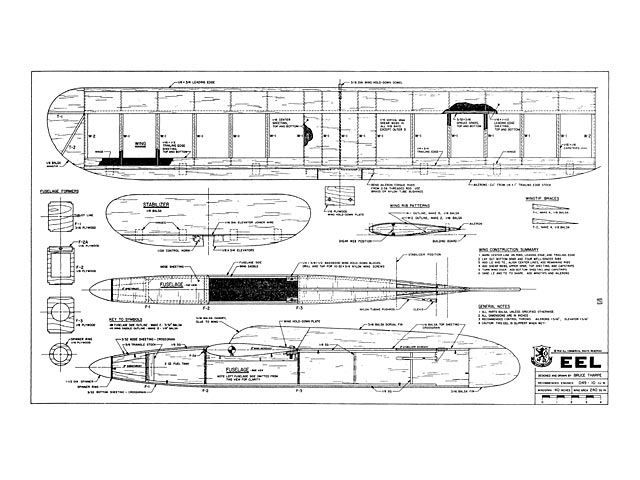 Quote: "The similarities between fish and aircraft are obvious, Both require streamlining to move efficiently through their respective 'fluids.' Both require stabilizing surfaces and the ability to change direction in three dimensions. In support of this comparison, aeronautical texts quite often include a drawing of a fish when first broaching the subject of airfoils or drag reduction.

So the next logical question for philosophical and aeronautical free thinkers every where has to be: How come planes don't look like fish? Okay, so maybe that isn't the logical question, but it was a subject that I pondered during at least one point in my life. Think about it - plenty of planes have been named after fish, but really don't really look like their namesakes. Douglas was pretty heavy into fish, and came the closest with their Skyray, which does resemble the manta ray after which it was named. However, they blundered badly with their dolphin, which had no snout, and their Skyshark which lacked teeth. Curtiss tried putting shark teeth on P-40's, but forgot the gills. The Minnow pylon racer was painted the wrong color, and the Barracuda home-built has the wrong fin shape. Neither the Fairey Swordfish or the Martin Marlin have a point.

You might be thinking that I don't have a point either. Well, maybe not, but it was that kind of thinking that made me decide one day to design a model that really looked like a fish. Since the obvious quite often escapes me (just ask my flying buddies), I didn't think about a common flying fish until well into this project. Ah, too easy anyway. Why, you ask, did I choose the eel? The idea sprang from another self imposed, philosophical debate, during which I asked myself: Does a vertical stabilizer have to extend above or below the fuselage to work? Reasoning that any side area on an airplane aft of the CG, be it fuselage or fin, contributes positively to directional stability, it seemed possible to design a model without a traditional vertical stabilizer. The idea was to simply extend the fuselage and fin aft, rather than up. The resulting doodles and sketches looked like an eel, and the rest is aeromodeling history. (Thank goodness.)

Does it really look like an eel? Not exactly, but with the fight kind of flexible imagination, I think one can certainly see more than a passing resemblance (can't one?). Not surprisingly, all of my flying buddies concluded that my new plane definitely looked more like a dogfish than an eel. Now, I really don't know exactly what a dogfish looks like, but I didn't like the connotation. Oh well, that's what 'buddies' are for!

CONSTRUCTION PRELIMS: The Eel is a pretty simple design, and most modelers who feel capable of flying the airplane are almost certainly capable of building the airplane. Like any good construction article must do, you are hereby implored to use only the lightest wood and components in the model. The beauty of scratch-building is the fact that you get to pick the wood.

You also need to make a few decisions before starting, like what engine and radio to use. Engine-wise, I think it would be tough to beat the Cox TD .09 used in the prototype. It's cheap, powerful, and lightweight. At a total weight of 26 oz, a stock Cox .09 provided outstanding vertical performance. However, if you fly where noise is a problem, you may want to go with an OS .10 with a muffler. Some modelers may insist on throttle control, but remember: you'll be adding complexity and the weight of a servo to the model (assuming you can find room for the servo!). The prototype Eel used Futaba 5-33 micro servos and a 250 mAh battery pack, and there wasn't much room left in the radio compartment. You'll definitely need small radio equipment.

Some builders may insist on adding landing gear, especially if they must fly from hard surfaces. The Eel was designed without landing gear to make it lighter. faster. simpler, sleeker, and less expensive. Eels generally like water, but I recommend sticking to soft grass for a landing area without wheels.

Wing: The wing construction technique was borrowed - well, stolen - from a Joe Bridi kit that I built years ago. The basic procedure is laid out on the plans, so only a few extra comments are needed. After the top sheeting and capstrips are in place, the wing is flipped over and pinned to the building board upside down, this time using 1/16 in shims under the leading and trailing edges (extra capstrip material works nicely). If your building board is straight, your wing will be straight.

The ailerons arc made by cutting 1/4 in off the trailing edge of standard 1/4 x 1 in trailing edge stock. This results in thicker, stiffer ailerons that blend into the airfoil. After cutting the curve in each aileron, you can sand their bottom surfaces to match the thinning trailing edge at the wingtip.

Fuselage: Start the fuselage by cutting the sides from 3/32 balsa and adding the 1/8 sq balsa longerons and 3/8 triangle stock in the nose area. Join the two sides to F-2 and F-3, making sure that the sides are square with the formers. When dry, add F-1 and join the sides at the rear..." 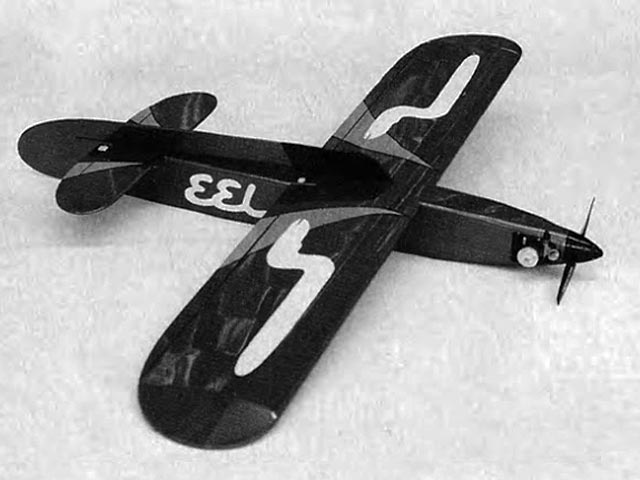