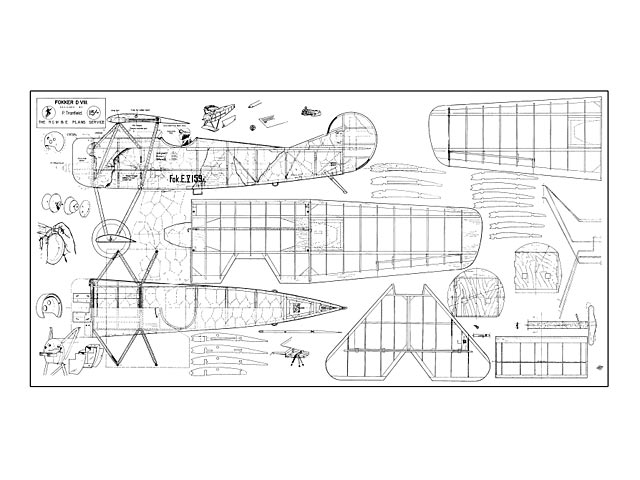 Quote: "A 47 in span model for 2.5 cc motors and single channel, or even the latest, lightweight multi R/C gear. Fokker DVIII, by Pat Tranfield.

IF you are looking for an extra stable, steady flying, first scale model, don't read any further. But if you are the type of scale modeller who likes a challenge, this is just the project for you.

At first glance the layout of the Fokker DVIII appears to be ideal for stability purposes. The parasol wing, large tail area and general appearance look perfect. On showing the hefty airframe whilst under construction to my friends at the flying field, the tiny wing area, lack of dihedral and washout, led to a few 'tut-tuts' and remarks of 'You'll be lucky'.

As I value the opinion of these experienced fliers, I went home wondering whether I had bitten off more than I could fly. True, the wing loading was about a pound and a half to the square foot. But these disadvantages added spice to the project and all the more excitement as the test flight day approached. When the model was finally finished and fitted with a brand new PAW 2.49, the day of reckoning had arrived. With stuttering voice I gave my pal Colin the OK to hand launch the model. It started off in a steady climb, but then slid over to the left and hit the ground with a resounding crash.

Amazingly there was not much damage. Obviously the three degrees of side thrust were not going to be enough. Gradually during the following test flights I ended up with six degrees. Then came the reward for all the doubts and anxious moments of the past months. After the launch a steady climb, turning only slightly to the left in a wide circuit. Round she came at about 30 feet with her ugly snub nose turning into wind. It was then that I realised what we scale fiends see in this branch of the hobby. Makebelieve, whether we are man enough to admit it or not is something that stays. Nine or ninety, the child in man prevails. There she was, Germany's answer to the Camels and SE5 returning to base after a successful test flight with that Ace of Aces Oberleutnant von Tranhofen at the controls; reward enough.

Radio Installation: The model has a MacGregor single channel receiver. The Elmic Compact escapement has been stripped of its wiper contacts as my example had proved to be unreliable. It would have been nice to have had throttle control but not at the expense of loss of control. Reliability of equipment is essential with an unforgiving model of this nature. Keep the gear in the positions shown on the plan and you will not be far wrong.

Fuselage: The fuselage is built in the usual crutch system. Front side formers and longerons are then added and the front end from cowling to aft of the cockpit is covered in 1/32 ply. The top hatch is built up with formers and stringers, then covered in 1/16 sheet. The hatch is held in position by utilizing the rubber bands that hold the batteries in place, plus the ply hook cemented beneath the hatch former. Top and bottom of the fuselage is covered in sheet balsa as shown on the plan. The sides from the end of the ply sheeting to the stern post can be sheeted also, this is optional. The prototype had nylon covering at this point and proves to be strong enough, besides being more realistic.

The cowling can be quite easily made from a six-inch diameter whistling kettle and construction sketches are shown on the plan. They are easy to find, just cut away the spout, fill in the rivet holes after removing the handle. Cut away the bottom as shown with a fine toothed fret or coping saw and add the reinforcing ring using epoxy glue... " 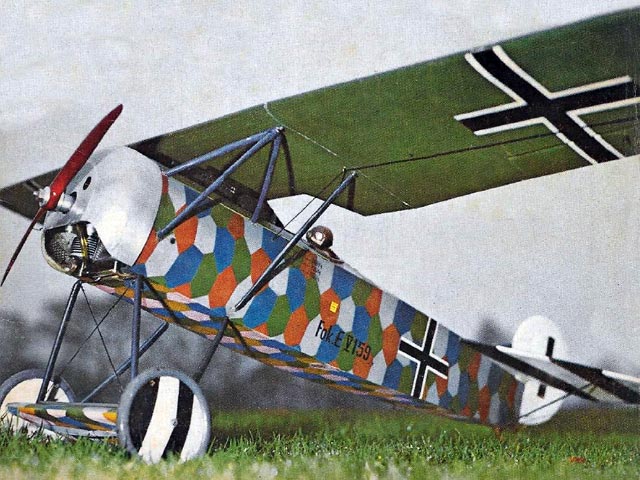 Absolutely entertaining article written by the author/designer/builder/pilot of this delightful model.
Bernard Odendaal - 24/01/2020
Add a comment