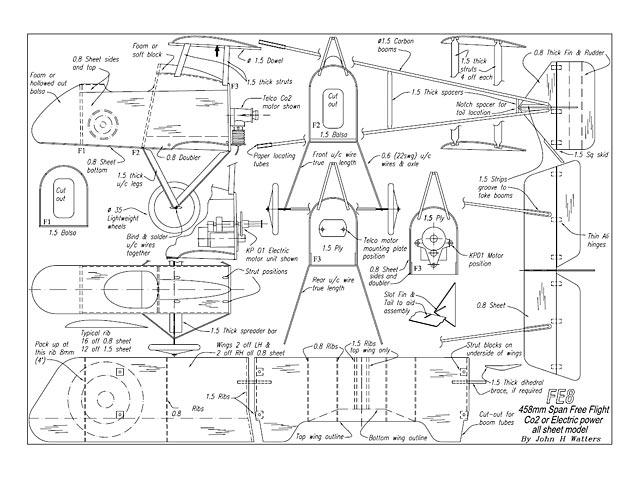 Note this plan is a free download from the aeromodeller.com site at http://aero-modeller.com/bonus-coverage-from-issue-4-922/ where there is also a link to buy a set of laser-cut parts.

Quote: "This clean and well-designed little pusher from World War I may not have been much of a match for or the Albatros fighters from 1916, but it holds its own in character as a fine scale subject for CO2 or electric power. Royal Aircraft Factory FE8, by John Watters.

For years, I have been flying many different types of indoor model aircraft. These have included vintage, scale, and a wide variety of unorthodox designs. Until recently, one type I had not really had a lot of dealing with is models of the pusher variety. The majority of these models have been CO2 powered and, personally, I have found this ideal, with its ease of power control. The only pusher I had previous involvement with was an F5b, which also happened to be CO2 powered. The model survived for a couple of years of successful flying before meeting its demise against a Sports Centre wall. Sadly, my initial involvement with pushers ended there.

Nevertheless, as we all know, "what goes around comes around" and therefore, here we are again. From that first effort, a lot of experience has been gained. Hence, as with this new model of the FE8, I would try things out before venturing into detail. I decided, this time, to use the correct scale outlines and construct the model from thin sheet balsa. So far, this has worked out very well.

Of all the early pusher designs, the FE8 is probably one of the simplest to build. I had already obtained a plan of the Bill King diesel free flight model design. Construction of this CO2 model is nothing but simple. As with any model you build, we all have our own methods, so I will leave that up to you. What follows is a guide as to how I built up the model.

Fuselage: You will have already decided which type of motive power you are going to use. Although I have shown both CO2 and KPO1 motors, I have to admit that I only have experience with CO2 power. Start the fuselage by cutting two fuselage sides from 0.8mm (1/32") sheet balsa. Pin one of these down over the plan and glue the three formers Fl, F2 & F3 onto this sidepiece. Do check that they are true and vertical. For the majority of this build I used cyano glue. When ready, glue the other side panel onto the formers. With this structure set, add the nose block, from either foam, or hollowed out light balsa, along with the top decking. Before adding the bottom sheeting, it is best at this stage to position the CO2 tank and pipe work.

When happy with this, add the bottom sheeting and sand the structure to shape. While adding the fuselage struts, you will find it easier to position them, by using either balsa or thin card jigs. These struts are glued into slots cut into the rear of the top decking. A thin dowel is located inside the top of these struts, for the wing-retaining band. The undercarriage wires are formed in two pieces, then bound and soldered together, along with the axle. Fixing these wires to the body can either be permanently glued in position or locate the front wire into a slot in the bottom sheeting as I did.

Builder's Tip: The rear wire for this undercarriage is simply attached using masking tape. I use simple detachable undercarriages on many indoor models. This method has been developed from having models being hooked up in netting whilst flying in Sports Centres. You can retrieve a model easier if the undercarriage detaches. I have seen many a fellow modeller's very nice models, beaten to matchwood by carbon steering poles, as a result of trying to unhook them from attached undercarriage hang-ups.

As this was an experimental design for me, I did not put in a lot of scale detail. As such, the wheels are cut from Depron sheet from an old crashed shockie, which do in fact work very well. There are a number of more suitable lightweight scale wheels available. SAM's Models are a good source.

Fin and Tail Plane: After cutting out the parts, cut small slots in the tail plane and fin, so that they fit into each other. Glue these together, making sure they are square to each other. Small pieces of aluminium sheet are used to fix the elevator and rudder in place. Add small balsa strips to the top and bottom of the tail plane. These should be slightly grooved to locate the ends of the booms.

Wings: Four identical outer wing panels should be cut from medium grade 0.8mm sheet balsa. The top and bottom centre panels, differ in their trailing edge shape only. Mark the position of each rib on the underside of each of the wing panels. To aid giving the wing panels the required camber curve, I dampened them on what will be the top surface and allowed them to dry naturally. Apply a thin line of glue over each of these rib positions. I used a contact adhesive for this job. Check that they do not twist. The sheet panels should easily curve to the rib shape. Make sure that the inner rib on each outer panel is angled to give the correct dihedral amount.

When all panels are complete, glue each outer panel onto the respective top and bottom centre panels, propping them up to give the required dihedral (4 degrees). I added small hard balsa dihedral brace to the underside of each wing at the joint line. This is an option. Balsa strut locating blocks are added to the underside of each wing assembly, at each strut point. Small holes are drilled through the wings and these blocks, (1.5mm dia.) for strut location. All the wing struts should be cut from 1.5mm thick hard balsa, with the end of each strut shaped to fit the holes in the wings. Make four of each, front and rear struts.

Booms: The booms are made from 1.5mm dia. Carbon rod. Position the rods over the plan and glue the 1.5mm thick balsa spacers between the rods. The rear spacer should be slightly notched for the tail plane location. I found that cyano glue was adequate for this job. A small strip of very thin aluminium wrapped over each joint adds extra strength. Make paper tubes which are a good slide fit over the top and bottom boom rods, these are used later in the boom/tail plane location.

Assembly: Here you may want to use your own assembly method. Wings can be either fixed in place (glued) or, as I have done, attached with small elastic bands. Whichever way you choose, the next step is to add in the wing struts. With both wings in place, add each strut in turn along each wing locating them in the small holes. Make sure that the wing assemblies are true to each other and the fuselage. A spot of cyano at each strut location should make the whole thing quite rigid.

Using the plan as a guide, make either balsa or thin card jigs. These are used to locate the tail relative to the body and wings. See sketch of this jigging method. With the wing/body assembly located on the jig and temporarily fixed with tape, position the tail plane assembly at the other end of the jig at the correct distance from the wing trailing edge and fix with tape. Now slide each tail end of the booms onto the grooved strips on the tail plane. The paper tubes at the wing end of the booms can also be located in the slots at the wing trailing edges. You may have to do a bit of iggling about to get the booms correctly positioned, but when you have, put a spot of cyano at the tube /wing locations and at the tail plane. If you need to make any adjustment, do this by sliding the booms in or out of the tubes. When happy, glue the booms and tubes together and strengthen where they fit into the wing slots.

Finishing and Flying: Whichever power source you are using, fit the propeller on in what would be normal mode as backwards, as the motor will be running backwards. I applied the markings for my model using felt nib pens taped onto a pencil type compass. A balance check seemed about right and we were good to go. A small gas charge was given and the model put on the floor, here we were flying in a sports hall at the first indoor session. After releasing the model quickly sped across the floor and took off into a circular flight pattern, surprise all round! What followed was many hand-launched flights on full liquid charge, each on giving a good flight and landing. Success - there was one incident due to turbulence from a heater which caused a severe contact with a wall, but after a bit of onsite rebuild, we were back flying again, with no difference to the flight pattern. One of these flights can be seen at https://www.youtube.com/watch?v=mc27XYGWAx4
Yes, pushers are fun, have a go - they do work." 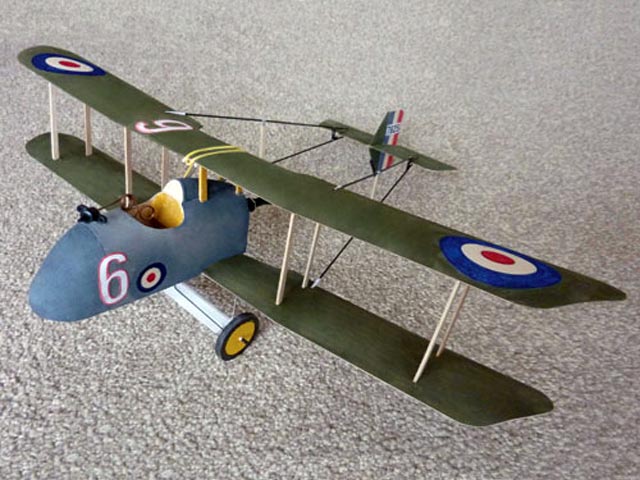