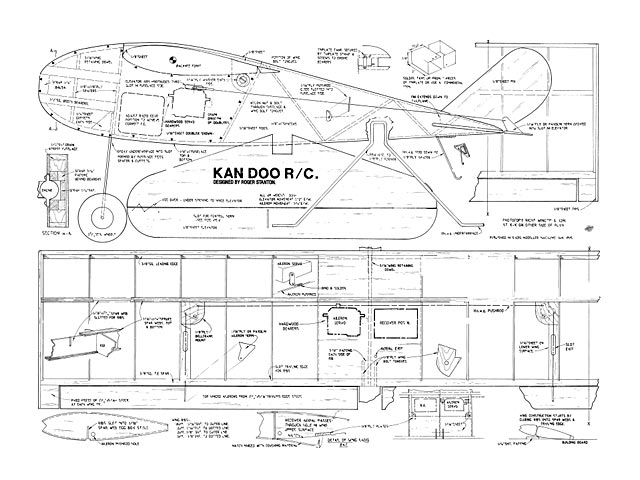 The original Kan Doo (oz3612) was a CL sport model from 1949. This here is a later version enlarged and redesigned for RC.

Using modern radio control in vintage free flight models is one of the more popular branches of our hobby, but a few brave souls have also done the same thing with control-liners! One of my favourites was the R/C version of the not-quite vintage Keil Kraft Firebird (oz11889) in the February 1988 edition of Radio Modeller. This prompted me to look for other suitable conversions. For a variety of reasons I didn't get very far until last year when, by chance, I saw a drawing and article about the Kan Doo (oz3612) in an old copy of Aeromodeller. It was 45 years since this model won the control line Gold Trophy aerobatic competition at the British Nationals in the hands of Peter Cock and I found the simple lines strangely attractive.

As I don't have any miniature radio gear, Kan Doo R?C is slightly larger than the original and the fuselage outline has been stretched a little to make it a more practical proposition for radio flying. The solid profile fuselage has been replaced by a built-up structure which, as well as being lighter, also provides space for the battery and elevator servo. I believe the sheet tail surfaces and built-up wing are reasonably authentic apart from the ailerons and the centre section which houses the receiver and aileron servo.

The first Kan Doo was a one-piece model, but for convenience and access to the radio gear, I elected to use a bolt-on wing Like the original, I used a diesel engine and tin tank, Together with the exposed wire elevator pushrod and Lightspan covering, they help to give the right vintage flavour. For those who don't like diesels, an old style 15 glow motor such as an OS 15 or Enya 15 would be a good choice.

Construction: After cutting out all the parts, I suggest that you build the fuselage first. Using a contact adhesive such as Evostik, glue the 1/16 sheet doublers to the 1/16 fuselage sides. Note the grain direction of the doublers which is across that of the sides. The 1 x 1/8 in fuselage top, bottom and rear fuselage spacers are now added to the right fuselage side, together with the 1/2 in square beech engine bearers, 3/8 packing and 7/8 x 1/8 forward fuselage spacers. The tailskid is sewn to the rearmost spacer which is 1/8 ply. Complete the forward end of the fuselage by gluing the 1/4 in sheet fuselage top, bottom and undercarriage gussets in place. When dry, the second fuselage side is added. Cut away the right fuselage side sufficiently to allow the engine to seat on the bearers and drill for the engine bolts or screws (I find self-tapping screws are quite adequate in beech bearers for a PAW 19).

Wing construction starts by slotting the ribs onto the 1/16 spar web and into the slots in the trailing edge. The assembly is pinned down onto the building board with 1/4 in packing as shown on the plan until the glue is completely set. The leading edge and upper spruce spar are now fitted. When dry, remove the wing from the board and add the lower spruce spar. Drill the leading edge and cut away the centre rib to fit the wing locating dowel. The 1/8 ply wing bolt tongues are glued either side of the centre rib with scrap balsa packing to adjust the width across the tongues to match the gap between the fuselage sides. The 1/8 tips, fixed pieces of trailing edge stock and the 1/16 centre section sheeting can now be added (except, of course, where the radio hatch will be fitted).

The aileron bellcranks are installed next, together with the aileron pushrods which pass through pieces of scrap 1/16 sheet on the undersurface of the wing. The aileron servo is screwed to small hardwood blocks and the pushrods to the bellcranks can be 16 swg wire or old snake off-cuts..."

Quote: "Kan Doo RC ...Roger Stanton's 36 inch model is an RC version of earlier 1940's control liner (Pete Cock's Kan Doo - oz3612). Please note that the original plan had that blotchy look as though the ink was getting a bit thin on the printing block and so the text is not as legible as always. From January 1995 Radio Modeller." 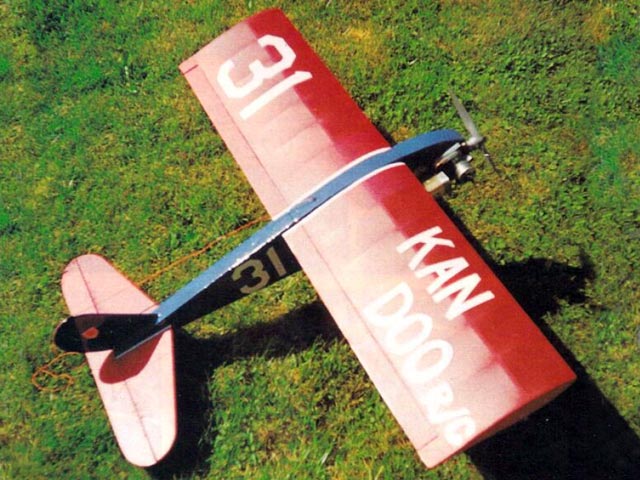