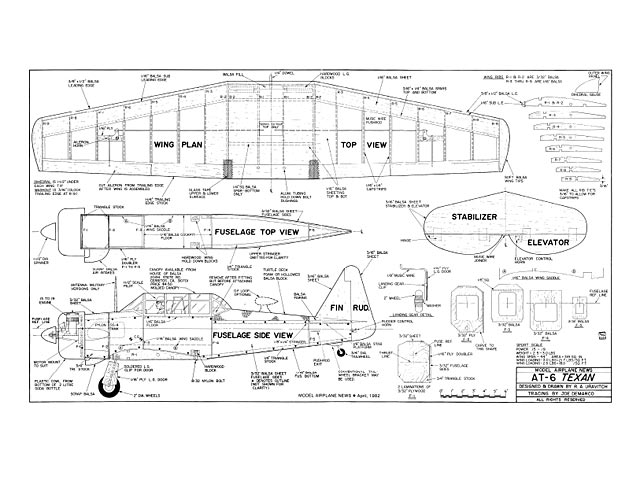 Quote: "T-6 Texan. A .15-.19 powered sporty scale and fun racer that could lead to a new one-design, economical class of R/C racing. By Richard A Uravitch.

ITS INTERESTING to consider what makes certain airplanes more popular than others. The popularity of the full scale airplane seems to be directly proportional to the number of R/C kits of that airplane that become available. The classic example of this is the P-51 Mustang. We have had kits and published designs ad infinitum, from 1/2A through 1/4 scale and everything in between - and that's only the R/C versions.

As I see it, nearly every R/C scale enthusiast wishes he was a '51 driver and the cornucopia (read 'kit manufacturers') disgorging the kits makes the fantasy happen. Let me set the record straight - no one, full scale pilot or R/Cer, ever strapped on a '51 and tweedle-deed around the patch without a heck of a lot of prior time on something a wee bit more forgiving. Which brings us around to the subject of this article, the T-6 Texan.

Well, here's a new T-6 that represents the mini-economy-size end of the spectrum, but this one is scratch-built. It's for .15 to .19 power (except for you heroes who'll insist on stuffing a K&B 3.5 in the nose), will cost maybe fifteen bucks to build, and should be framed in about a week (it took me two but I had to draw the plans!). The design is actually a second-generation version of a T-6 that I designed some years ago for quarter midget racing - you remember, when an DS 15 and a House of Balsa Shoestring was the 'hot setup'. Well, I guess we've come full circle - I've got that same DS 15 in mine!

I thickened up the wing, fattened the fuselage and simplified the construction. The model lends itself nicely, with minor changes, to also produce virtually any of the T-6's predecessors such as the NJ-1, BC-1 or BT-9. Dom Palumbo, a co-worker and frequent contributor to modeling publications, was enthusiastic about the design, took a set of my preliminary drawings and built a BT-9 version. He finished it in a typical pre-WWII trainer scheme of blue fuselage with yellow wings and tail group. The red-and-white striped rudder adds a nice splash of color. A very attractive and colorful variant, Dam's model is powered by an unthrottled Cox .15 and is flown three-channel. I'm sure that it could be very successfully operated as a two-channel airplane, eliminating the rudder.

Now that your appetite has been whetted, let's get into construction.

When cutting out the ribs, I'd suggest you make six W-2 ribs, pin them together and sand so they are all identical, then un-pin them and cut the rear lower 1/4 in spar notch in four of them, which will give you the required W-1 center panel ribs. This procedure will assure you an exact match when you join the outer panels to the center section.

After cutting out all the remaining ribs, pin an 8 inch section of 1-1/4 x 5/16 shaped trailing edge directly over the plan (protect the plan with waxed paper or plastic wrap - it cost you money!), and add the 1/16 balsa lower sheeting, the forward and aft lower spars, the four W-1 ribs, upper spar, and sub-leading edge cap. Now epoxy the hardwood gear blocks and balsa filler block in place, and add the top sheeting and leading edge..."

Note this plan is derived from the raw article scan posted by Andre on the AF site (see Datafile). This version here has been scaled up to fullsize at 44 inch wingspan, then cleaned up and realigned. Also fixed unequal length of wing panels.

Ladies and gentlemen, I have just had the exceptional pleasure of assembling House of Balsa's AT-6 Texan (North American Harvard). I built the Texan while I was ill, and even a bit delirious. Yet even with this lowered level of concentration the Texan came out straight as an arrow, as the flight performance proved. Getting the parts for a .20-size kit - or any kit - to fit so precisely is truly an accomplishment. After talking to my model buddies I've come to the conclusion that this quality is common to all HOB products.

THE KIT: The Texan's box is filled with premium balsa; many pre-cut balsa and plywood parts; a well-formed canopy; much of the hardware; and clear, accurate plan sheets. An instruction booklet with no less than 108 photos showing virtually every step of construction is also included. The most amazing part of all this is the list price, $39.95 - very refreshing. The kit's quality and price are only surpassed by its flying characteristics. The kit for HOB's Texan was designed by Rich Uravitch, and MAN has plans for this little beauty. It is a stand-off scale .15- to .20-size ship with a 44-inch wingspan and 319 square inches of wing area. With good reason, HOB touts this kit as a penny-pinching (1/4-midget) pylon racer.

CONSTRUCTION: The appearance of the finished fuselage belies the fact it's basically nothing more than a box with slab sides, doublers, and formers. The turtledeck pieces fit so well I assembled the whole section without glue, then applied Zap. The finished fuselage is very light and strong.

The wing is built in three sections: A center panel and two outer panels. HOB includes a handy little device called an upright. This nylon tool insures a 90° rib installation and has three slots of different thicknesses, which makes it useful for future projects. All three panels are flat bottom and built directly over the plans. The outer panels are built with a good bit of washout, which improves stall characteristics and helps eliminate ballooning - an unwanted habit in pylon racing.

I built my entire model with Pacer's Zap CA, CA+, and Slo Zap. I glass-taped the wing sections with Slo Zap by first tacking down the end of the glass tape with Zap CA. Then I applied Slo Zap to the wing surface, stretching the tape around the complete wing, and tacking the other end of the tape on the bottom of the trailing edge. This method is fast, strong, and simple. Be sure to squeegee any extra glue off the tape, this also pushes it down into the weave of the cloth.

The fin and stab are 3/16-inch slab balsa, as are the control surfaces. The aileron linkage uses the flexible cable method. I've always avoided this method for some unknown reason..." 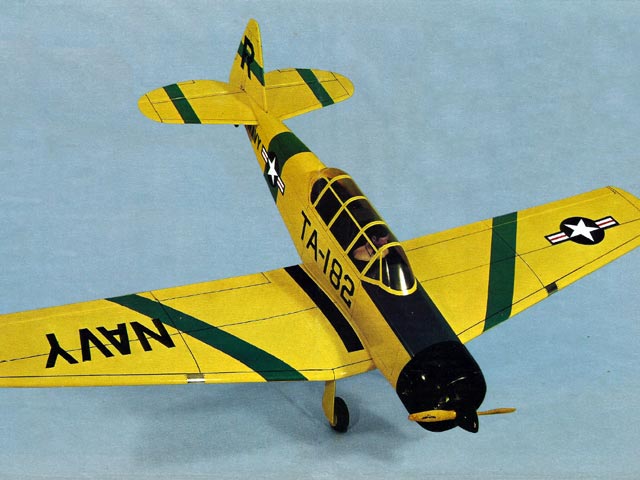 I believe this is also the original plan for the House Of Balsa 44" AT6. I recognize some construction details. I used to own one and it flew absolutely fantastic. However, by the time I built it, the black 2L soda bottle bottoms were already obsolete.
The picture for this plan was also used by HOB on the box, which I mimicked to my plane.
Maarten Zanders - 12/05/2021
Maarten, you are correct. The House of Balsa kit even said "As featured in the April 1982 issue of M.A.N." in the box. Now the question is if maybe this one should also be tagged as "kit".
RC Yeager - 14/05/2021
Add a comment