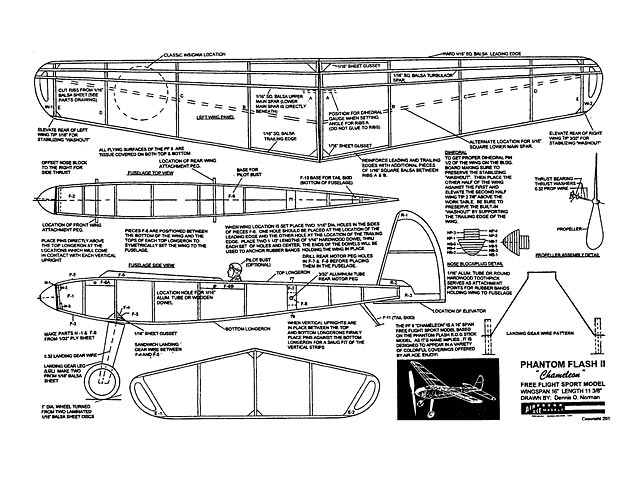 The original Phantom Flash (oz10096) was a simple rubber stick ROG model from Comet in 1938. This here is a modern version, extensively re-designed, and with a built-up fuselage.

Note this plan is a free download from the Model Aviation site at https://modelaviation.com/ff-scale-december-2016 where it appears along with build article and some colour pics.

Quote: "As many of you might know, the Phantom Flash is a 16-inch wingspan stick model designed by Joe Konefes in 1937, and originally kitted by Comet Models. It inspired many of today's modelers with its brilliant simplicity. More sophisticated designs have since arisen, but the Phantom Flash is a classic that can be built quickly and flown to the delight of youngsters and oldsters alike.

By modern standards, much of the Phantom Flash's design is archaic. The landing gear struts are fashioned from thin sheet balsa and are frail. Balsa cutouts are intended to reduce weight, but they create structural weaknesses that can easily break when the struts are torqued. The wing design is flimsy and prone to severe warps when exposed to prolonged sunlight. The empennage and wingtips present the same flaws as the landing gear struts.

A straight pin is used for the combined rear hook motor mount and tail skid. It potentially places the rubber motor against the motorstick, inviting problems with rearward bunching when the motor is wound. There is no provision for adjusting propeller thrust.

Although retaining the tail surfaces and wing of the original Phantom Flash, the Phantom Flash II reinforced the wing with three 1/16-inch square spars. The original stick fuselage was replaced by a built-up fuselage that included an adjustable nose block, rear motor peg, and wire landing gear glued to more sturdy wooden struts.

Like the Phantom Flash, the Phantom Flash II is offered with a choice of nine sets of coverings ranging from WW I through Vietnam. Each Phantom Flash II kit provides three sheets of tissue that double cover all flying surfaces and the built-up fuselage. My prototype Phantom Flash II was covered with Vietnam War markings. Feeling lucky, I dispensed with the usual gliding tests and put a couple hundred winds on the motor. To my delight, the prototype had a 56-second maiden flight! Since then I have nearly lost it on several occasions.

The Phantom Flash II is so charming that I am presenting it to you as a holiday building project. I am sharing a 'bones' shot (uncovered) of the air frame and two covered examples (the Red Baron scheme from WW I and the Vietnam version). Reduced copies of the tissue sheets for these two are included with the article. Another seven coverings are presented for your consideration. For more information, see the 'Sources' list.

Here is a peek at the Phantom Flash II plans. The original is presented here and can be enlarged to a 16-inch wingspan [note: plan here is full-size at 16 in span].

The Phantom Flash II semi kit sells for $20, plus $5 for shipping and handling. It contains full-size plans, a parts sheet, detailed building instructions, and directions for applying the tissue. Each semi kit contains three sheets of preprinted tissue for the subject being made.

Fine Esaki Japanese tissue has been attached with double-stick tape around the borders of each tissue sheet. This keeps the tissue flat and makes it possible to put it through a color copier to print.

It is important that you understand that the semi kit does not contain balsa wood or laser-cut parts, wire, washers, wheels, or a propeller. These essentials are commercially available.

When the airframe is complete - and before it is assembled - the tissue for each covered part is cut free from the backing paper. The tissue parts have been drawn approximately 1/8-inch oversize to completely fit the part being covered. Each semi kit provides you with my contact information, and I will be glad to explain any 'mystery' not covered in the semi kit. 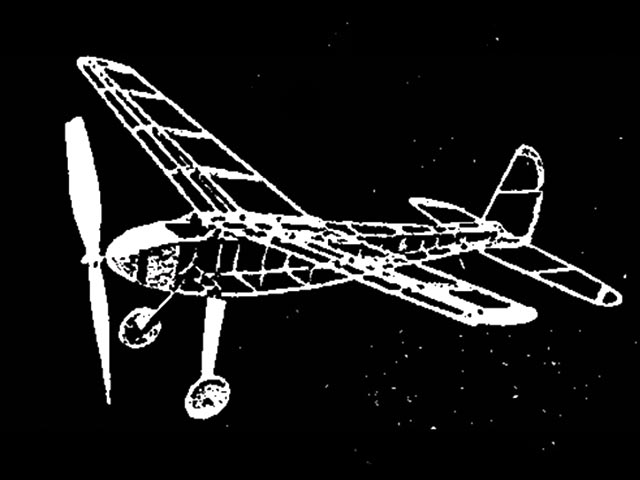