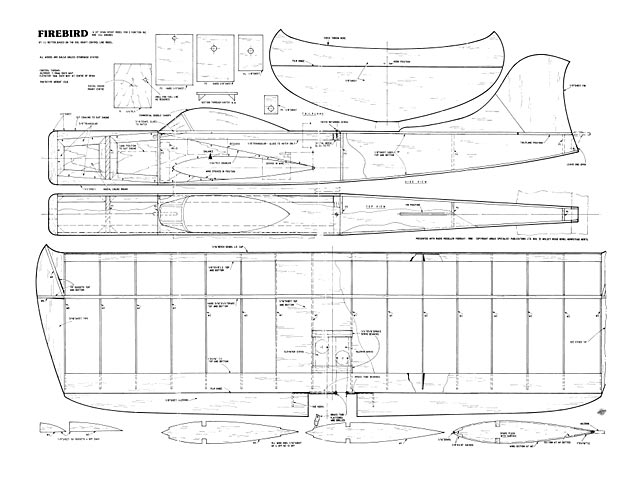 My main reason for building any aeroplane is simply fun. I quite like building models that are different, especially if they are cheap and fun to fly. The Phantom Mite I scaled up and converted to R/C as the Phantom Major (oz11720) was more fun to fly than I had imagined and it really was nostalgic in that it was amazing how many people had flown the original C/L version. The largest portion of my C/L flying was with combat wings and 1 had always admired the lines of the 'Firebird' so it seemed a natural progression to convert one to R/C! I even debated whether or not to fit 'flapperons' like a C/L stunter but as it will turn very tightly without, I think that I am glad I didn't bother.

In 'designing' the RC Firebird I left the wings and tail alone, enlarged the fuselage by about 50% and made the fuselage into a 2 in wide box instead of a profile shape. The fin (which is only added to C/L models to make them LOOK like aeroplanes) was similarly enlarged. The end result is a model that weighs about 1/2 lb more than the original but still about 4 oz lighter than the R/C Phantom Major despite being about twice as powerful! Performance is every bit as interesting as you might imagine!

Getting started: The construction of the 'Firebird' is very straightforward but caused a lot of comment from friends who didn't think that I knew what a wing rib was. 1I used to build a lot of my aeroplanes that way once but I get bored cutting all those identical bits out. Nostalgia strikes again (I still find it boring!)

Construction starts by cutting all those wing ribs out, by the way, making sure that the centre four ribs are smaller than the others by 1/16 in to allow for the centre sheeting - at least there are no leadout holes to cut out! I seem to remember that the original Firebird had split ribs so that the wing was built to top and bottom halves but I settled for pinning the bottom 3/16 in spar to the plan and building the rest of the wing around it. The leading edge is unusual in that it is built up using 5/16 balsa strip (the widest my X-Acto stripper will cut) and 1/8 in dowel.

The latter was an idea I pinched off a glider guiding friend (thanks, Malcolm!) and it has proved ideal for giving a hard, constant radius curve that doesn't dent easily. It can be seen from the photos that the sheeting for the centre-section does not go right across; the radio gear goes in the 'hole' in the middle and the sheet is cut flush with the inside sides of the fuselage when the latter is glued in place. The wing tips are an unusual shape but should give no difficulty in construction, the curve covers with nylon quite nicely.

I made what 1 feel was a mistake in covering the wing in nylon after I built the rest of the model. I think that it would be better covered once the wing is complete (servo bearers, etc, fitted) so that there would be no weak spot near the centre-section. I covered my wing with a single piece of nylon per panel wrapping it around the front and pinning it to the rear. The whole thing was then doped and painted with car touch-up aerosols when construction was finished. Ailerons were cut from 1/8 sheet, covered with lightweight tissue doped in place and centre-hinged with Mylar strip. Torque rods were 14g wire with my usual brass tube output arms (all done after the fuselage).

The tail and fin could hardly be easier; they were simply 1/8in sheet cut to shape and sanded to section. Again they were finished with tissue and dope and the elevator was hinged with Mylar. A commercial horn was used on the elevator... " 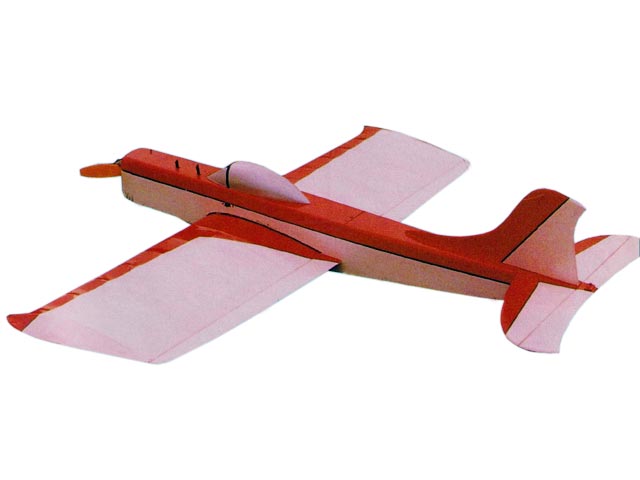