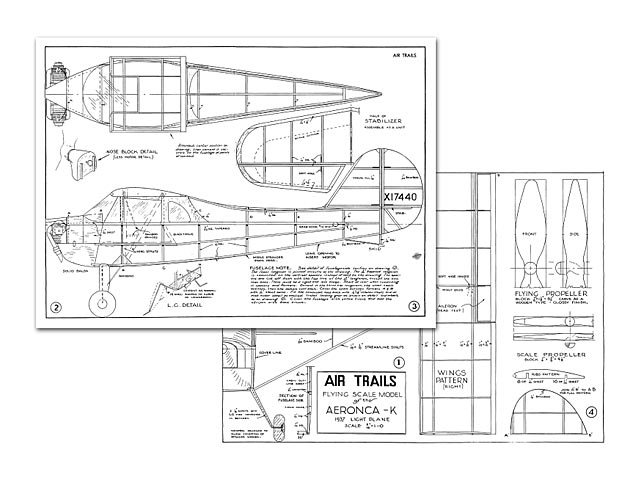 CALLED a champion by its manufacturers, the new Aeronea K is an advanced light plane in the low-price range. Powered with the Aeronca E-113C 40 hp engine, the K has a top speed of 93 mph and cruises at 85 mph on 3 gallons of gas per hour.

Dual wheel controls replace the conventional stick in the middle of the cabin floor, freeing the cabin of obstructions. The longer landing-gear struts and the wing struts enhance the appearance of the already pleasing design, which has been faithfully followed in the model.

The model design is simple and will not prove difficult for one who has only built a few.

DIRECTIONS FOR BUILDING The instructions for the fuselage are on Drawing 3. The wing panels are of the simplest construction. To obtain a left-wing drawing. trace the right panel onto a sheet of white paper with an inverted sheet of carbon paper under it. To add ailerons, if desired, cut through the ribs with a razor blade and cement in the 1/32 sheet spars. In this manner, fitting is avoided and a better line-up is obtained.

The tail surfaces are also simple, and since the ribs are of 1/16 square, the units can be built in a form. The controls are not necessary, but have been drawn in, in case they may be desired. Cement soft wire hinges in, and then cover the surfaces on both sides with yellow tissue. Cement them to the fuselage, but be sure to cut away the tissue where the cementing is to be done. Sew the brace wire (thread) through the spars at the next to the last rib on the stabilizer halves, at the last rib on the fin, and tie under the bottom of the fuselage.

Make a paper pattern of the windshield; then, after trial fittings, cut the real one out of thin celluloid and cement it in place, covering the cabin windows and the sky-light. Add minor details td complete the model.

Power the model with four strands of 1/8 flat rubber, if the flying propeller shown on the drawing is used. The model should balance longitudinally, a third of the chord from the leading edge of the wing. Glide the ship at first, then increase the motor turns after each test and adjustment, until performance is satisfactory."

Note this plan and article were extracted from the RCLibrary listing at https://rclibrary.co.uk/title_details.asp?ID=1836 with thanks to KaoruKiyose, Mary.

Article. Includes 4 pages of drawings as originally printed in the magazine. 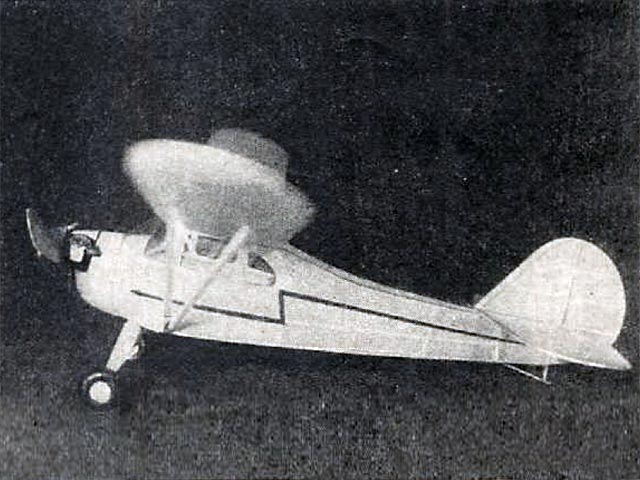