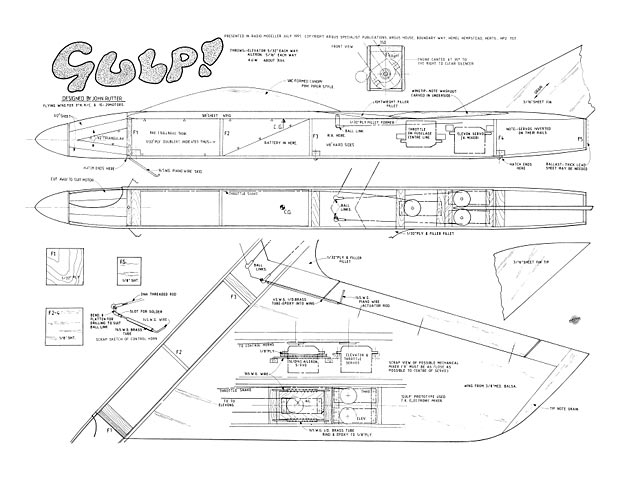 Quote: "Hold on to your hats! John Rutter's flying wing has arrived. Gulp.

Despite the performance of this model the name is a bit of a joke or pun on the fact that it was inspired by a friend's scalish DH 108 Swallow. I thought that my model might be somewhat faster than his Swallow and what is a fast Swallow if not a Gulp? The model may look a bit intimidating but, like every flying wing Eve ever tried. it's very smooth and stable in flight. It would undoubtedly fly on a .15 (my ME 163 of many years also flew very well on a .15 and has very nearly as much wing) butt quite fancy one of those new ST 34s and some sort of tuned exhaust! Just to show that megalomania doesn't have to mean noise, I fly the model on a 9 x 7 prop, which keeps the revs down to 12,400 or so on the ground with my ST.29. Even with this larger than usual amount of pitch the model will still climb vertically forever.

Let's go! Construction is arty simple and starts with the wing. This is made up from 3/8 in medium to light sheet butted together. Small anti warp tips are added to the basic shape before the mess starts. I carved washout into the first 8 in or so of the wing tips which serves to stop tip stalling as well as to reduce the reflex needed on the elevons. In fact the model needs very little additional reflex when balanced in the correct position. Once the reflex is in, the rest of the wing can be carved and sanded to a smooth section but beware of thinning the trailing edge too much or the control surfaces might be a bit weak, I didn't go for a razor sharp leading edge either as they dent easily. Make sure that the wing root is sanded good and square on both panels and butt join with Cyano or epoxy. There is no dihedral.

Cut away the elevons and the mid section where the torque rods will fit. I centre hinged the surfaces with mylar so they only need to have a V planed on their LEs. Make up the torque rods from 14G piano wire and brass tube. Mark where they are to fit on the wing and take a semi circular gouge out of the wing with another bit of brass tube. Do the some on the bit you cut off and then cut a slot for the control horns to move. Glue the torque tubes in place with a very tiny drop of cyano and glue the TE bit back with PVA or balsa cement, NOT cyano as there is a very great risk of gluing the whole lot solid! Guess what I did on the original? That's right, so don't use cyano!

That's the wing complete apart from covering, I didn't reinforce the centre section join with anything as I made sure it was very securely glued and it's reinforced to some extent by being glued to the fus. It's survived even the odd cartwheel landing to it isn't at all weak.

The fin is made in exactly the same way..." 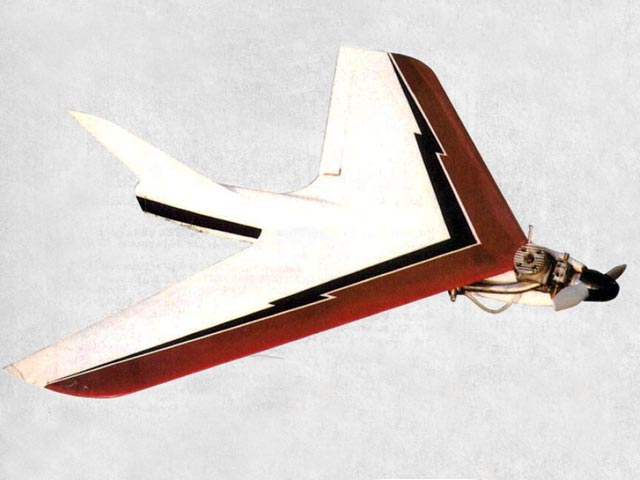 This is a very cool airplane. I'd like to do a fast electric version with a 700+ watt motor I have. Have all the wood ready but I dont understand how to carve the washout/reflex in the wing. Does anyone know how to do it, or know of article that explains it?
george - 18/11/2021
Add a comment