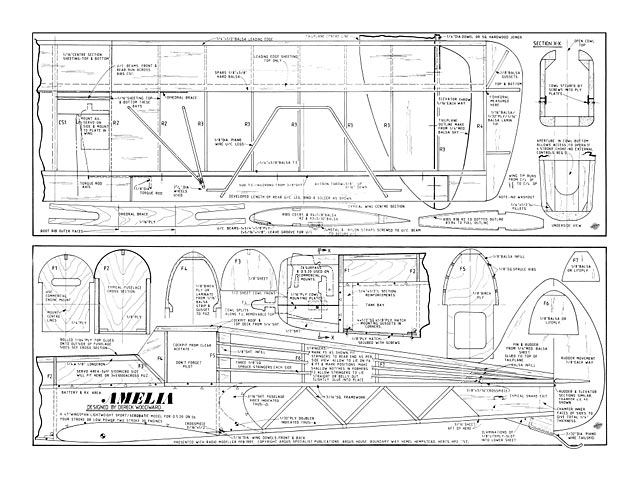 Quote: "Hi Mary, Following on from Dereck's 'Bubbles' tailless model, recently added to OZ, here's another pink covered gem from his design portfolio - 'Amelia' being in the more conventional 'with tailplane' format. It was originally featured in Radio Modeller February 1991. The scan attached has a reprofiled dihedral brace as my copy of the original plan had become distorted over the years. Hope the plan is of interest to OZ. Best wishes for Christmas and New Year,"

Do you like aerobatics - but like to relax with a slow model? Prefer smaller models? Fancy a model that's all of these? Good! Meet Amelia. A light, aerobatic and fun-packed 'vintage' structure around aerobatic dimensions, designed for the small OS or Vega four-strokers. A semi-scale fuselage, full cowling and a cockpit with stringered rear deck which says 'aircraft'.

Thinking long build times? Sixteen days' work from a blank sheet of paper lifted off on a test flight which ran to loops, rolls and Cuban eights. If you're ready to try a new dimension in model flight, let's go. For inspiration, write 'Light is Right when it comes to Flight' on a sheet of paper, pin it over your board. Now we build your 'Amelia', so how about the wing first?

Nostalgia is cutting out ribs! The NACA 23012 ribs were plotted by Chuck Anderson's Model Design program as sold by Argus Specialist Publications. The program also printed the wing panels and ellipses for the rear deck formers. I didn't realise the bug-eyed monster was that much use - check with ASP to see if your number cruncher is compatible.

Make a ply template of R3, and cut out the ribs from quarter grain for the whole wing. Ribs 1 and 2 then are trimmed by 1/16 in as appropriate to allow for centre section sheeting. Easy so far. Yes, the spars are balsa - use wood with long straight grain here. The only departure from a 'vintage' structure is the leading edge top sheeting, to preserve the airfoil. The easy way is to build two panels, then jig in place over the drawing and build the centre section and its ply joiner between them.

Fit the aileron torque rods, slot the trailing edge for hinges, then fit the aileron blanks in one piece, root to tip - glued to the fixed portions, held by the hinges along the moveable portions. Now blend into shape, part the ailerons off to remove and chamfer their LEs. They can't help but match the wing now. As balsa tips are very prone to 'hangar rash', I used a sandwich of 1/16 balsa over 1/64 ply. This has proved durable - when a wing panel got wiped out (pilot error!) the tip was salvageable and went straight onto the new wing - why waste good wood?

The piano wire undercarriage mounts into channels made from 1/8in plywood built into the C/S and flexes to allow a little 'give'. With the wheels just ahead of the Le:Amelia' will track straight on the take off roll. Long main legs and the sub fin-mounted skid give good prop clearance and a low ground angle to counter any swing as the tail comes up. Two nylon straps screwed into the rear beams retain the aft leg, the wing bands hold the front.

The other big bit: Start with the fuselage rear frames by cutting or selecting your 3/16 square stock; fairly hard wood with long straight grain is called for. The open frames are built onto the front 3/16 sheet and the old trick of building the second frame atop the first is as valid as ever. For newcomers, this construction is not slow or complex. Just accurately cut a length of strip, check again for fit, apply glue and place in position. With a little practice you'll progress so quickly you'll be disappointed that it's finished!

With two sides sitting on the bench, fit the 1/32 ply doublers. A valid old warning is to ensure you build a pair of sides - as opposed to two right handed ones! The fuselage is parallel sided from F1 to F5, so formers F1, 2 and 5 are glued vertically to one side. The opposite side is then added and left to set (or proceeded with if you're a cyano user).

The rear ends of the sides will need a little chamfering so that, when joined, the sternpost will be 1/4 in thick to match the rudder. Make this a good snug fit before gluing up, the sides follow their natural curve from F5 to the rear end. Now fit the fuselage cross braces, again mark off, cut, check, glue and fit..." 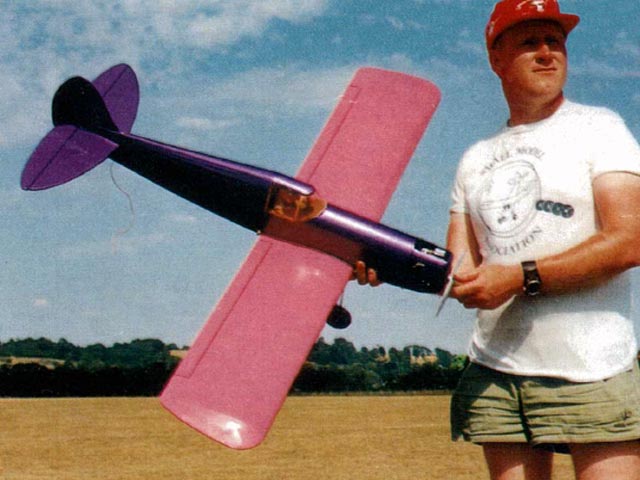 Built Amelia from the original RM free plan in the 80s. Has now been converted to electric and still flies amazingly after all this time
A D - 28/03/2020
Add a comment