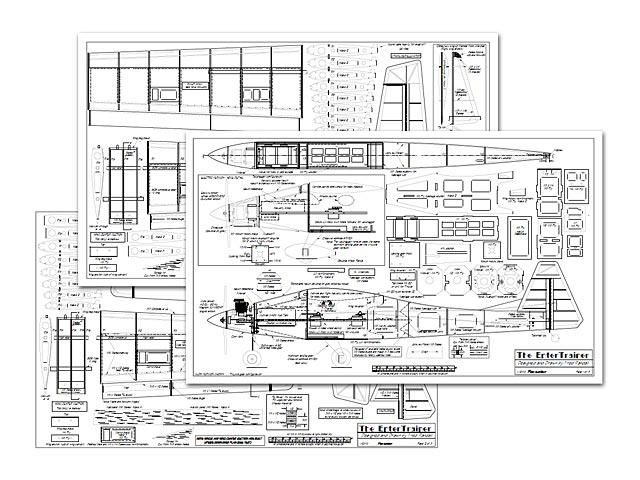 EnterTrainer. Radio control aerobatic trainer model. For IC or electric power. Note the plan shows 2 full wing layouts with normal wing at 58-1/4 in span and an alternative extended wing at 68 in.

Note this plan is a free download available from the Model Aviation site at http://modelaviation.com/entertrainer where it appears along with the full build article text and some great build pics. Also free downloads of the 3 plan sections in alternate tiled format.

Quote: "I am not an accomplished RC pilot. My hands shake and my knees want to buckle whenever I have a model in the air. Perhaps it's something to do with 'an old dog, and new tricks'. At 75, I can most certainly be considered an old dog, and so 'ARF' in my case might be a salutation, rather than meaning 'almost ready to fly!'

While sketching some ideas for a new airplane on an art tablet I decided to get back to basics and design a model that I could relax with at the flying field. The result was an airplane originally conceived as a conventional trainer.

I tend to have occasional lapses of reason, but the realization finally came to me that I didn't need a trainer; what I needed was an aerobatic model to help me improve my meager flying skills without taxing them beyond reason. This realization resulted in the airplane that I call the EnterTrainer, which is the subject of this construction article.

Design considerations: The airplane's configuration is that of the familiar stick model, with the wings and empennage altered to suit the purpose of this design - that of a stable platform from which to learn the basics of RC model aerobatics.

I didn't design this model with any intention of 3-D capability. While cognizant of the piloting skills needed for this mode of operation and the dedication required to attain them, I'm afraid the art is lost on me. I like airplanes that fly like airplanes, not marionettes!

The model can be powered using a .46 to .60 glow engine, or with an electric motor of similar power rating. It can use a tricycle landing gear or be configured as a tail-dragger; these options are shown on the plans.

The power plant chosen should be dictated by the type of flying you intend to do. At roughly 6.5 pounds, this is not a super lightweight aircraft, and unlimited vertical performance will require power greater than that previously stated for sports use.

A further option is the extended wing. If you are looking for a model with a wing loading of less than 20 ounces per square foot, the extended wing set provides this. The standard wing is just the ticket for spirited sport flying, while the lighter loading of the extended wing might be better for those with 3-D aspirations, or those desiring a slower-flying model.

In either option the wing uses a thick symmetrical the National Advisory Committee for Aeronautics (NACA) 0016 airfoil at the root, tapering to an almost flat-bottomed NACA 25014 at the tip. This creates wings with a flat top, but with roughly 1/4 inch of dihedral on the bottom under each tip. The total configuration is meant to enhance stability in upright flight, while paying only a slight penalty when flying inverted.

Both flaps and ailerons are provided. The bottom hinged flaps can be eliminated and the ailerons extended to full span if desired. However, I suggest including the flaps as an additional learning tool. The flaps of the extended wing are center hinged for those who would engage in creative transmitter programming.

The empennage is designed to allow maximum deflection of the control surfaces without conflict between the rudder and elevators. Both have dynamic balancers to reduce strain on the servos. In any version, EnterTrainer is a gentle flyer that can adapt to the pilot's growing skills by the simple expedient of increasing the throws of the generous (dare I say 3-D rated) control surfaces.

The laser-cut fuselage construction uses a snap-together tab-and-slot box, consisting of the forward fuselage doublers and several formers. These assembled to a tray for the servos, and either a battery or a fuel tank. This arrangement, besides being immensely strong, helps ensure alignment of the fuselage.

This construction article assumes that the builder has at least a minimum of hand tools, including a model knife, long and short sanding blocks, a razor plane, and a coping or scroll saw to fabricate light plywood parts. An electric drill and a Dremel-type rotary tool are also helpful. You should have an assortment of clamps or spring-loaded clothespins can be substituted.

If you're not using the short kit, it's best to fabricate all necessary parts before starting construction. Many of the parts used to build this model contain lightening holes, as well as tabs and slots that are easily made with a laser cutter. This isn't as easy if you're fabricating your own.

If duplicating these parts is daunting, then by all means simplify them. Use a rotary tool or hole saw to make lightening holes and eliminate the tabs and slots. Use clamps and squares to produce a straight airplane.

Several sizes of balsa strip are used during construction. I generally cut most of my balsa strips from 3/8 balsa sheet stock, rather than ordering it to size. I encourage modification and experimentation. I always learn something new from those building their own versions of my models.

Construction: This model is for an intermediate builder, and I would not recommend it as a first construction project, because some careful carving and shaping is involved. I suggest building the fuselage first, because it is the more complex of the assemblies involved in building EnterTrainer..."

Quote: "Hi Steve/Mary, Seeing the Sonic Cruiser (oz11817) plans on your website today triggered memory of a marked resemblance to the EnterTrainer (by Fred Randall) which I discovered on modelaviation.com quite a while back. Not surprising that both are good/stable trainers; especially when using the extended wing on the EnterTrainer (plan has 2 wings). I attach the article, the plans for the std wing, extended wing and the fuselage, etc. Everything is available on the website. In my older age, and the luxury of ultramicro RC kit, I have gravitated back to my early stick-and-tissue roots, converting many plans like this to the UMX realm (26 - 36 in less than 200g AUW; typically 1in to 1ft scale if applicable). The EnterTrainer with an extended wing is definitely one of my future to-do's - unfortunately my list keeps growing :) Kind regards," 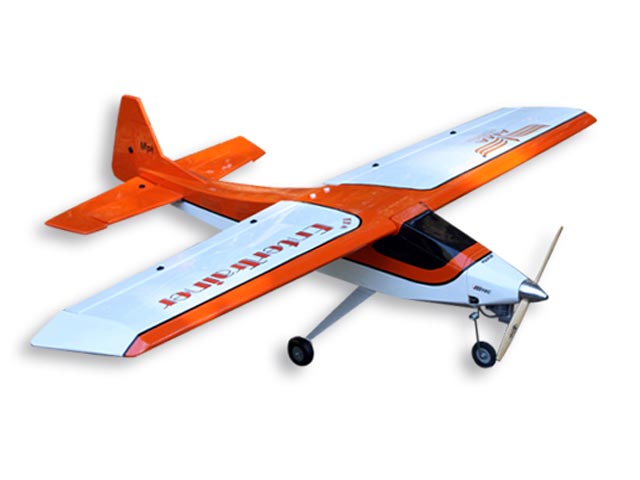