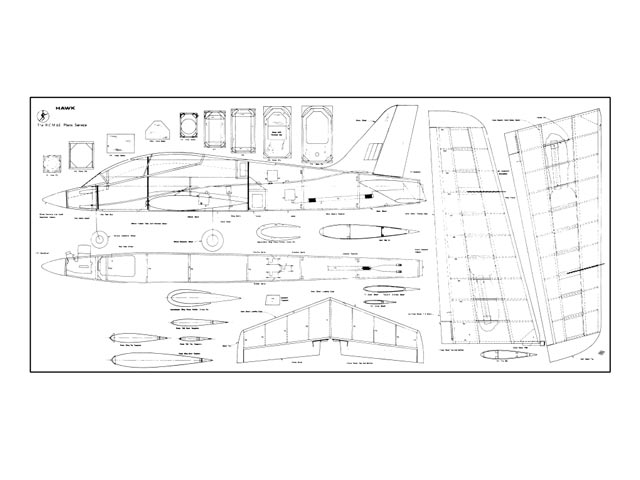 HAVING decided to build a new acrobatic model all that was required was the shape and size. Skipping through magazines I found myself pointed in the direction of the Hawker Siddley Hawk as a basis. Smart new shape, deep fuselage, especially up front for knife edge flying and swept wing for speed with stability. My only concern was that the rudder (all top side) would push the tail down when used. In practice the swept back hinge corrects this and the rudder action remains true and powerful. Although only based on the Hawk the final model certainly looks the part in the air.

My original version has a foam core wing and tailplane but built up units are shown on the plan. My own feelings are that foam core wings are truer and quieter (no sound-box effect) but you pays your money etc, etc. The wing itself has pronounced sweepback and no washout. Its profile however is 15 per cent thick at the root and 17-1/2 per cent at the tip, in addition wing fences are fitted as per the full size Hawk. The end result is a wing which is very stable at low speed. How much of this is due to the wing and how much due to the fences I don't know, but I am not about to alter it so take my advice and fit the fences.

The model was originally designed and flown with a plain bearing OS .35 and was more than adequate for the Sunday flier. However, in the end I succumbed and fitted my HP.40, and with this motor the Hula can climb on 'knife edge' and will climb straight at about 45 degrees continually after lift off.

After initial tests the model was handed to several seasoned club members for evaluation. The result was requests for six copies of the plans in the same week - can't say better than that.

Construction: Wings: Cut out the root and tip ribs, add the intermediate blanks and carve to shape.

Before building add 1/16 ply stiffeners to the root ribs at the leading edge on the tip rib side. This is to support the wing dowel. At the same time add 1/16 ply stiffener to the ribs supporting the U/C blocks. Take rib eight and trace its outline adding 1/16 in top and bottom for sheeting plus a leading edge radius. This is the inside profile of the wing fences. Cut two of these from 1/16 ply and put to one side.

Both wing panels are built upside down. Pin the front spar to the board and glue the root and tip ribs in place using blocks to keep them level and vertical. Next add the leading and trailing edges. When dry add the rest of the ribs, ensuring they are upside down. The bottom spars can be added followed by the 1/16 cross-grained balsa web between the front spars. Next add the 1' C hearers and lit flush with the ribs. A 3/8 fillet is fitted between the leading edge and the root rib to support the wing dowel. The underside can gloss he sheeted. The wing can then he removed from the board and the top rear spar fitted. Cross grained 1/16 balsa sheet can now be added to rib seven. This side of the wing can now he sheeted along with all cap strips and tip blocks.

When both panels are complete the root ribs are grooved to take the 3/8 dia dowel. Both panels are then epoxied together. Stiffening sheets of 1/32 ply are glued to the lower wing surface between the rear spar and the trailing edge for the wing bolts. An aileron servo box can now he cut out to suit. The centre section TE is cut from 1-1/2 in TE stock as are the ailerons. These TE pieces are then fitted incorporating the aileron torque rods. The wing joint is now reinforced with glass fibre bandage and resin... " 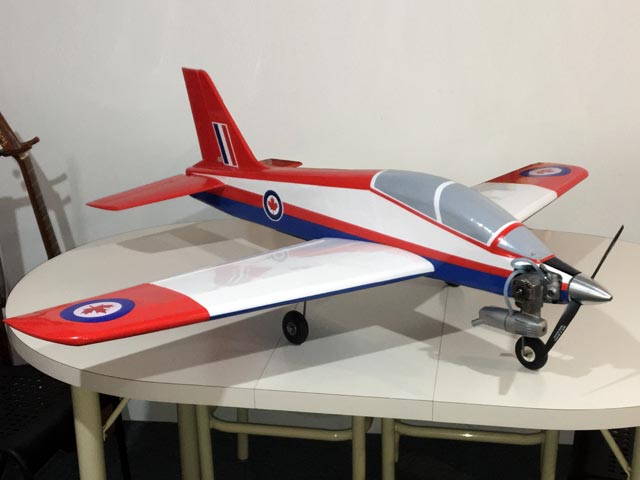 Happy New Year, I saw this listed in the Outer Zone today. I finished this model last year [main model pic]. Just have to fly it.
JimPurcha - 12/01/2020
There are a couple of errors on the drawing.
1) The foam core root and tip profiles are the same size as the balsa rib profiles with balsa sheeting applied. The foam core root and tip profiles should be narrower.
2) The stab profile shown on the fuselage tail section is full section at the center. I have a pdf with profile at the fuselage sides.
Jim - 12/01/2020
Add a comment