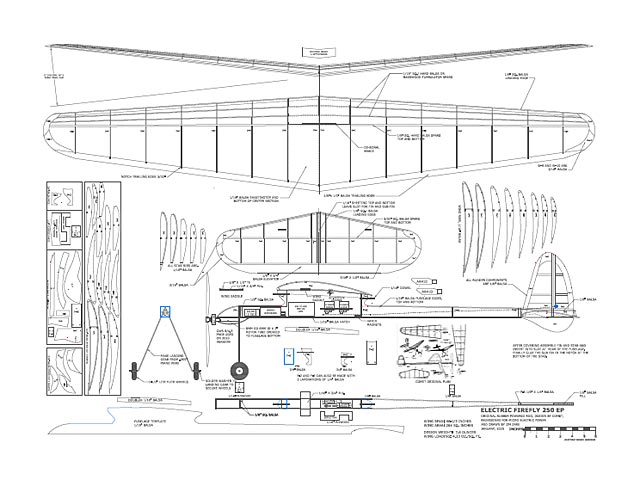 The original Comet Firefly (oz148) was a simple rubber stick (free flight) model dating back to the 1930s. This here is a modern enlarged version, re-designed for RC and with brushless electric power.

Note this plan was posted on RCGroups by the designer himself.

Quote: "I designed an electrified Comet Firefly in 2000 with a wing span of 46 inches for the MTM Hummingbird motor. This was followed by a 38 in Comet Phantom Flash in 2001. Both models featured a stick like fuselage with the 3 cell Tadiran pack in the pylon and the MTM Hummingbird servo taped to the bottom front of the fuselage. I flew these models for several years until I wore out the motors.

They were largely forgotten until last summer when I acquired an original 2000 era Firefly from a friend’s collection. The model was built by the late Don Belote in 2000 and still had the Hummingbird motor, a Feather receiver and a couple of original Hitec HS-50 servos installed. I placed a Spectrum AR410 receiver in the model and tried it with modern Lipos. It flew perfectly but the old brushed motor didn’t have the same power I have been accustomed to.

I thought that it would fly even better with a modern brushless motor but I couldn’t figure out how to mount the motor without butchering the nose. I then remembered the Eflite SE-5 which used a 6 mm ID carbon tube to mount a Park 250 motor. I found some tubes online and prepared to modify the power system.

I removed the aging MTH motor and epoxied the tube and Park 250 brushless motor to the front bottom of the model. The result is stunning.

The Firefly ROGs off pavement in about 10 feet and climbs briskly. I programmed brake on the ESC and was pleasantly surprised at the glide ratio of the model. I get 8 to 10 minutes with a 2 cell 250 mah lipo and 15-18 minutes with a 450 mah 2 cell pack. I have had several thermal flights the longest of which was about 35 minutes with a mere 30 second motor run.

I decided to modify the plans to show the 2020 version of the Comet Firefly for any who are interested in nostalgic models from the 1940s and 1950s. While I was at it, I also updated the Phantom Flash plan for the modern power system.

The black and yellow Firefly is the original model from 2000 with a new Park 250 and an APC 8/4.3 prop. It still retains the original servos. It features a NACA 6409 under cambered airfoil and a lifting stab. It is covered with Litespan. It is one of my favorite planes for sport flying.

Plans and photos [model photo & more pics 003] are attached. Construction is quite conventional and all parts are shown on the plans."

Update 12/01/2020: Replaced this plan with a revised version, thanks to JimZare.

Quote: "Steve, Here is a corrected copy of the Comet Firefly. I corrected the fuselage template at the bottom of the sheet to show the cut out for the stab. Regards, Jim Zare" 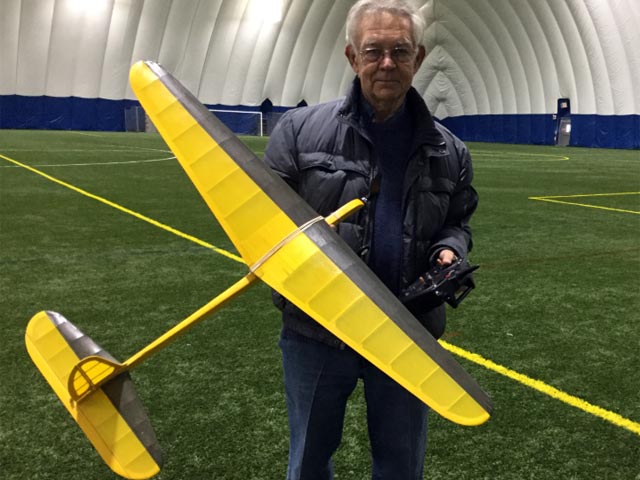