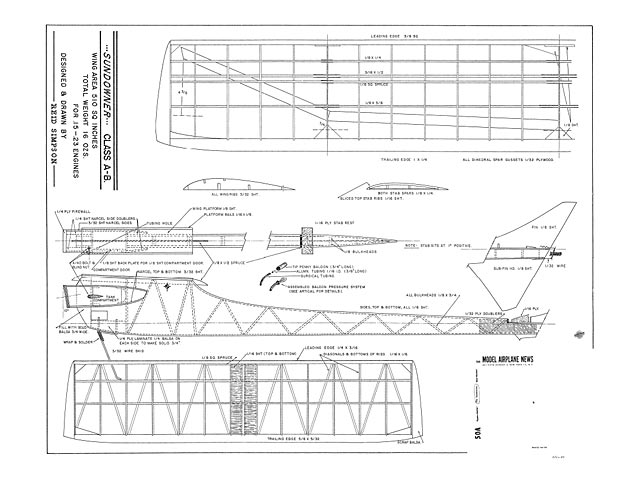 Quote: "Designed to Utilize the Many Engines in Class A & B. Sundowner has hit on an almost magic Formula: Using any size to win in each of these categories. By Reid Simpson.

In 1962, when the unlimited rules came into effect, I felt that to adjust to them, all I would have to do would be to mount larger engines in my existing weight rule airplanes. This worked to some extent, but the remounting of engine problems and the terrific increase in power which created some wild power patterns, soon made me wish I had built specifically for the unlimited rules. It's not my idea of pleasureful test flying to take out an 'A' ship, two years old, which weighs in at 18 oz for an .09, mount a Torp .19 on the front of it (if the firewall is big enough), and try to keep the wings already weakened from heavy weight DT's in one piece.

So came the desire for a new design, one that could easily handle the power, small enough to be considered a bomb, light enough to float on the weakest of thermals, easily constructed, easy to trim and stay trimmed. Sounds like a big set of shoes to fill doesn't it? I'm not saying I accomplished all of it, but the end result was good enough to capture a trophy in 13 out of 14 contests entered.

In first looking at the Sundowner, you may consider it a high thrust ship, to be flown to the left and glided left. A second look at the plans will show that it is a mid-thrust arrangement, which will allow a model to go safely either right or left; mine is flown to its right and transitions into a right glide smoothly on top. Not a new thing, but a proven one. I saw it proven when, in 1962, stationed in San Antonio and doing a lot of flying with Howard Timlin, (of Saturn and Solar fame). He came up with a mid thrust Solar which climbed right or left, depending on how it was launched, and maintained the degree of stability that I was hunting for. I then proceeded to incorporate it into the best gliding ship of any I had previously designed.

I lengthened the tail moment arm to increase the stability under power and to improve the glide even more. The glide improved with longer tail moments, riding the weakest of ther-mals for maxs. When test flying the Sundowner, I used hot .23's, .19's, and .15's. The result was the same, no change in the power pattern.

The Sundowner can handle all the power you can stick in it. I flew it all last year with a .19 and .23 as an A-B combo. In the first contest I flew it this spring, under the 15-second VTO rule, I used a good .15 since I had worn out my .19 and .23. The .15 provided me with more than ample power to max out and win first place with a 20-minute plus total. A small rudder tab with about 1/32 in right in it gives a beautiful spiral climb of 1-1/2 turns in 15 sec. The 10 degrees downthrust gives ample stability to VTO, and keeps the nose at about an 80-degree angle all the way to the top. So after a quick trip to the hobby shop for lightweight balsa, let's start construction.

STAB: First, make a plywood template to cut your sliced ribs, cut out desired number. Pin down the leading edge, and the trailing edge, glue in the 1/16 x 1/2 in rib bottoms and the diagonals. Next, glue in the spars, followed by the rib tops and balsa tips. When dry, carve and sand. Cover with Jap tissue, water shrink and after one coat of dope, install the top fin and plywood pop-up hook. Then apply 5 to 6 coats of 50/50 dope.

WING: Simple, but we will still run through the order of construction. Pin down the leading edge, trailing edge, and bottom spars. Glue in the ribs, tips, and corner gussets. When dry, pick up and carve leading edge and tips. Put in dihedral and top spars. Gauze dihedral joints, cover, shrink, and dope. After two coats of dope, cut your AMA numbers out of Jap tissue, and apply them with thinner. Finish doping to a high gloss with 8 to 10 coats of 50/50 dope.

FUSELAGE: The fuselage is constructed by cutting one side out of a 1/8 x 6 x 48 inch sheet of medium weight balsa, or splice two 3 in sheets, whichever you have access to. Be sure to cut out the opening for your balloon system since it goes all the way through from one side of the nacelle to the other. Pin the fuselage side down and glue on the 1/2 x 3/4 in top and bottom strips and bulkheads. Also glue in the 1/32 plywood doublers at the stab rest, the plywood support for the landing skid, and the 3/4 in thick balsa block in the nose. Notch the top of the bulkheads in the front section to take the 1/8 x 1/2 in spruce wing tie down. After this has been allowed to dry, glue on the second side. Let it sit overnight before picking up from the building board.

Next, insert the bottom fin and draw the rear of the fuselage together, being careful to keep the fin aligned straight. Build nacelle as shown on plans, gauze the firewall on, glue stab rest, and the wing platform. The door to the balloon compartment is constructed of 1/8 sheet balsa..." 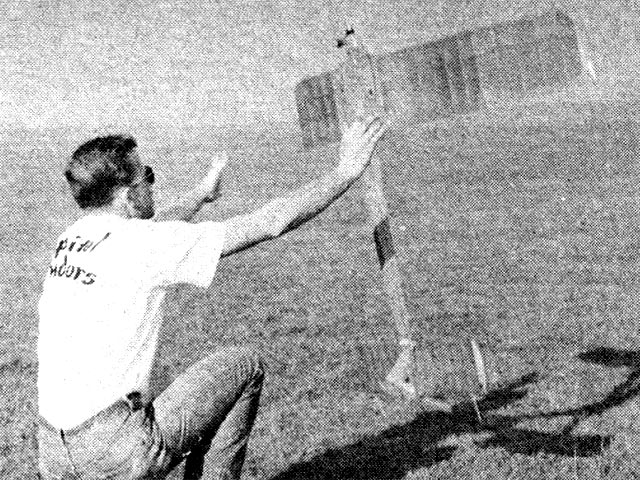