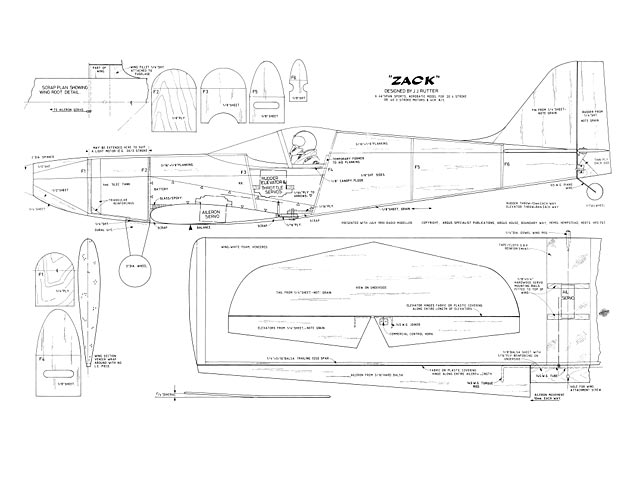 Quote: "Zack: John Rutter's 46 in sportster from July 1990 Radio Modeller. Scanned for historical interest, this model is in my opinion typical of the foam winged, slab sided, 'good .40' powered flying bricks of the time. I've edited the plan to correct the weird angle of the fuselage in the original and stitch the model's nose in it's rightful place."

Quote: "Try this 46 in span handful of aerobatic fun. Zack, by John Rutter.

Zack was originally designed around a HP VT 21 four-stroke motor which, though sounding lovely, is pretty heavy and not terribly powerful. Apart from looking pleasant (well I like it) the model had to be easy to make, light, have docile handling and at the same time had to be 'chuckable' to stop me getting bored with the low power available. To achieve all this I started off with the wing of a trainer I had designed (this having good low speed characteristics), added some ailerons to give more manoeuvre options and drew the rest around it.

The result was everything I wanted and a very nice aeroplane too. However, floats proved too much for the VT to take so a Thunder Tiger .40 two-stroke was installed instead (almost identical in mounting and weight to the VT, about 1/2 oz lighter) and as this gives about double the horsepower even on a big, quiet prop the performance is even better! A more sensible option might be to lengthen the nose a bit and fit a .20 two-stroke. I really wouldn't like to think of this model fitted with a powerful .40 two-stroke!

The wing: The wing I used was of foam/veneer without a separate leading edge strip but with a trailing edge strip to hang the ailerons onto. The well rounded section used lends itself well to this very light and quick form of construction but if you felt that you must have a more solid leading edge then be my guest but watch the weight. The ailerons may look a bit Heath Robinson but they have been used in this form as flaps on control-liners for years and they seem very effective as ailerons too. They could hardly be simpler to make but avoid very light sheet, it would be too flexible.

The wing tips are the usual light sheet/ block and the wings are joined together with epoxy before applying a wide ship of thin glass cloth. I'm a great believer in not overdoing the reinforcement at this point, the idea being that you are continuing the sfredgth of the skin across the junction and so avoiding a sudden change that may give trouble. Besides which a thin cloth will need almost no sanding to fair in with the rest of the wing and this avoids a sudden thinning of the veneer and potential weak point..." 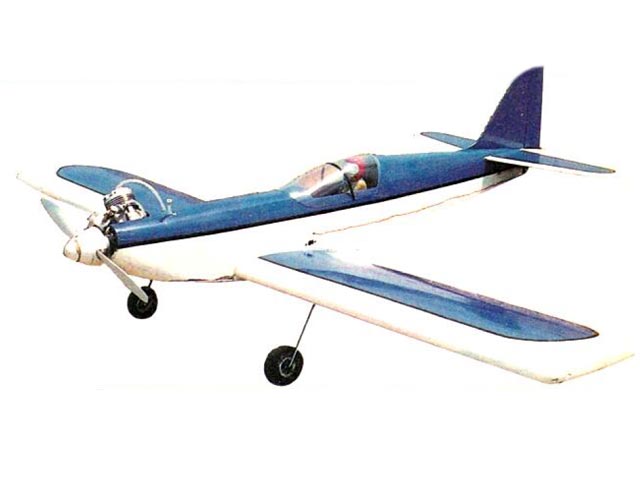