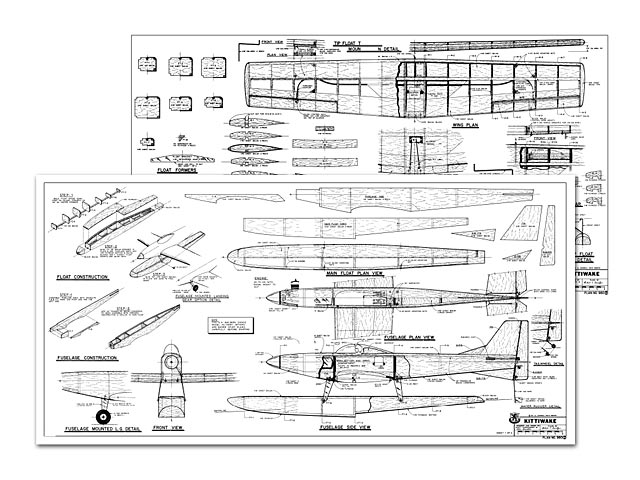 Kittiwake. Radio control sport floatplane for .19 to .28 engines and 4 channels.

Note this here is the Kittiwake as published in RCM. The design was also kitted by Top Flite, see Kittiwake (oz11861) for an alternative plan, which might help resolve problems with missing parts / information.

Note this plan has been scanned with a central band missing.

Quote: "Enlarged from the popular Islander (oz4876), the Kittiwake is a .20 - .25 powered land or float model. It is a sport plane for the relatively proficient sport fliers - definitely not a trainer. Kittiwake, by Scott Christensen and Ken Willard.

Sixteen years ago in the August 1970 issue, RCM published a construction article on the Islander, a single float seaplane which could be converted to a landplane, It was designed for the Max .10 engine, which was, and still is, one of my favorite powerplants. It used three channel radio to control rudder, elevator and engine - a nice, simple little job for sport flying on land or water. It was a very popular design.

However, as is always the case, some modelers wanted more performance. One of them was a friend of mine named Scott Christensen, who lived nearby and went flying with me whenever we could get together. He built the Islander, but modified it - reduced the dihedral (very necessary for rudder only type flying), added ailerons, and stepped up the power to a Max .15. He then proceeded to enter it in any seaplane contest within driving distance, and just about cleaned out all of the clubs' trophies for seaplanes up and down the West Coast.

Time passed, Scott moved out of the area, worked with several model companies, and finally wound up in Chicago with Top Flite Models, where he is now the Vice President of Operations. About a year or so ago, Scott and I were talking about old times, and he brought up the Islander. I sure liked that design, he said, I'll bet that if we enlarged it to take a .20 to .25 sized engine, and gave it some modernized touches - tapered wing, ailerons, and the currently popular straight lines on the tail feathers, the modelers would really go for it. Sounds good to me, I replied. Why not do it?

Not long after that; I received a note from Scott, in which he included a drawing and some Polaroid shots of a framed up version of the enlarged and revised version of the Islander. It really turned me on. Then, last April, at the Toledo show, he had the uncovered model with him - not to be shown, but just to be discussed. We did just that; I was mildly concerned about the vertical fin and rudder area, but with aileron control it probably would be okay. However, we agreed that I would build one and use slightly larger tail feathers so they could be compared.

So far, so good. Now, what should we call it? The 'Long Islander?' No, too provincial. Keep thinking. One night I was watching a nature program, narrated by William Conrad, about wild life in the Aleutians. There were some beautiful birds flying around the cliffs. Conrad referred to them as 'Kittiwakes' - strong, powerful, acrobatic birds equally at home on the water, or land, and especially in the air. That did it. I talked with Scott, and he agreed: we'd call it the Kittiwake.

Yes, there was another model called the Kittiwake (oz5847). But it was a sailplane - and not very much at home on the water. We figured there Wouldn't be much confusion; it wasn't the first time the same name had been used for different models at different times - and in this case, they were quite different from each other. Something like the Product 'Dash' comes to mind - how many people put Dash dog food in their washing machine? About the same number as feed Dash detergent to their dog. Naturally they stop when the dog starts foaming at the mouth. Oh, well.

Enough history. Let's get on with the building and flying of the Kittiwake convertible, seaplane / landplane. You'll find it to have very simple construction features, but let me give you fair warning. It is a sport plane for relatively proficient sport - definitely not a trainer. By properly setting up the throw of the control surfaces, and adjusting the center of balance for maximum performance, it flies like a pattern plane. That is not to say that it can't be 'gentleized'. If you can fly a good low wing sport plane like the Skylark 56 (oz1842), you can easily handle the Kittiwake. Let's build.

CONSTRUCTION: Main Float: You can't make a simpler balsa 'box' float; four flat surfaces, one of them with a break in it to create a step. Since this model is not for beginners, I won't bore you with 'glue part A to part B' instructions. The plans show the shape and sizes, so just follow the plans. Do note the centerline stringer on the top of the float; it will help you to keep the curvature of the sides equal. The mounting blocks for the struts can be made of hardwood or plywood. Put them on the sides before you join the sides to the formers, otherwise you'll have a devil of a time drilling the holes and installing the blind nuts. I know, because I did it out of sequence myself. Dum-dum.

Note the top of the float is rounded, but the bottom edges are sharp to give a good planing surface.

One more thing. Before you close the float up with the top surface, dope the inside of the bottom and sides to make them water resistant on the inside, and do the same to the top-surface inside face. Then, if a water leak should occur, the wood won't become water soaked. Desirable - but not mandatory.

Tip Floats: Cut out a center crutch as shown on the plans from 1/16 plywood. Note cut-outs to accommodate short lengths of brass tubing with 1/16 inside diameter into which the wire struts fit. Cut out two balsa blocks to the same shape, 1 in wide, for each float, Hot Stuff them to the crutch, and then carve to the somewhat streamline shape which is best shown in the photographs. Insert the brass tubing..." 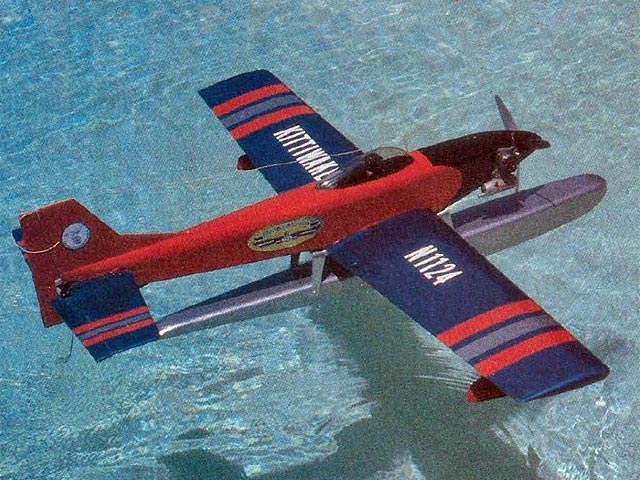