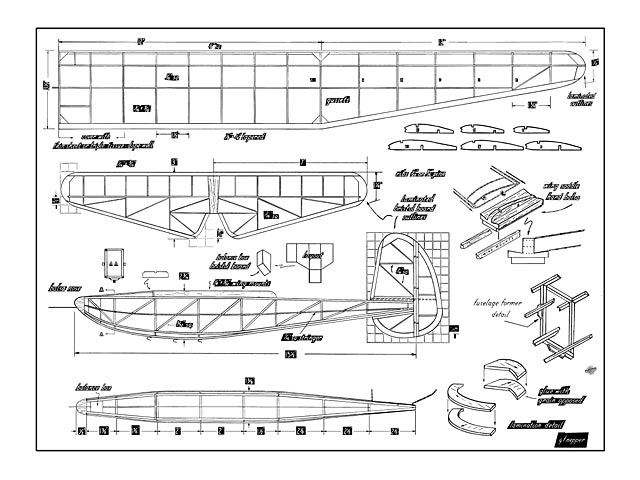 Quote: "Something easy to build and fly was what commercial artist Nepper wanted when designing his simple utility towline. Slim, by GF Nepper.

SIMPLICITY was the keynote in the design and construction of Slim, as this designer, after many years away from active model building, wanted a glider that wouldn't prove too difficult for his comeback. The original model, as presented here, was constructed of pine, cardboard, and balsa as, at the time of building, balsa had gone to war and couldn't be obtained locally. Though balsa is once again available, I still recommend these materials as the increased strength makes the model rugged enough to withstand occasional accidents with a minimum of damage. Flights upwards of three minutes were obtained during warm weather, which isn't bad performance for a simple model of this type. The plans are reproduced here one-half actual size, so any dimension or shape. may be found by doubling that of the drawing.

Begin construction by making the two fuselage side frames of 3/32 sq and glue together with proper crossbraces, following plan for width at various points. Then add two side stringers of 1/16 sq utilizing bulkheads or formers as shown in detail drawing on plan. The bottom longeron is 3/32 sq, with formers same as on side. Nose block is of hard balsa, carved and sanded to shape. The wing mounts are mounted on top longerons and cemented securely. At the forward end of the wing mounts and bulkhead is placed with 1/16 sq stringers leading to nose block. The balance box, made of bristol board, is cut, folded, and glued before inserting in fuselage nose. Nose may be strengthened by covering with thin sheet. Balance of fuselage is tissue-covered except space between wing mounts, which is left open.

The stabilizer is constructed in one piece. Leading and trailing edges are 1/16 x 3/16 with all interbracing 1/16 sq. Tip outlines are laminated bristol board, cemented with grain at right angles. Follow drawing for tip shape. Stabilizer is then covered on both sides with tissue, water-sprayed, and covered with two coats of thin clear dope. It is then mounted on the fuselage before the rudder and ce-mented securely in place. The rudder's construction is identical.

The wing is of multispar-type con-struction. The leading edge is 1/8 sq, cemented in place after the ribs, main spar, and trailing edge are glued in position. Trailing edge is 1/8 x 1/4 in, beveled to fit rib contour. Forward spar is 1/16 sq. Follow drawing for rib patteins. All ribs up to tapered section are shown on drawing as A-1. Rib patterns for tapered section are shown as A, B, C, D, E. Gussets should be cemented at points shown for strength. Tip outlines are laminated bristol board and fill-in for tip is shown by sketch. Wing is constructed in halves, incorporating 3 in dihedral from center to tip, which is secured by wing saddle.

Hard balsa was used for wing saddle, and, for simplicity in construction, it should be made of several pieces glued together. Saddle also serves as a positioning guide for wing between mounts, since wing is held in place with rubber hand. Wing is covered with tissue, the grain running spanwise. Then water-spray it and apply two coats of thin, clear dope. Colored dopes may be applied later if builder so desires. The center section shown on plan is covered with thin sheet or is triple tissue-covered, with grain at right angles.

After glider is completed, balancing is next step. Add weights in balance box until model balances at a point ap-proximately 2/3 back from leading edge of wing. First trial flights were made with a temporary hook in the nose of the ship. The glider is towed up to an altitude of approximately 40 feet, and upon being released, should dip down slightly and then go into a steady glide. Make corrective adjustments if necessary; then test with regular hooks - center hook was found best on the original model. Then adjust the rudder for turn. It was found that about four degrees incidence in the wing was re-quired for best flights. This amount is flexible, however, since no two gliders fly exactly alike. Experiment to obtain best results. During adjustments a piece of Scotch tape was used to cover weights in balance box without damage to covering. A 150-foot towline of button-hole thread was used. " 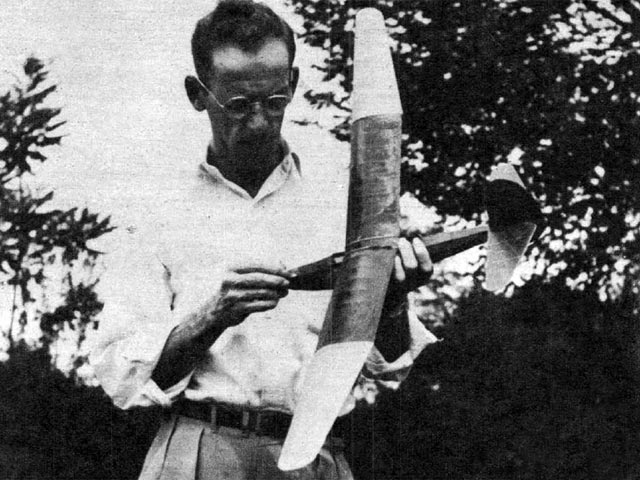