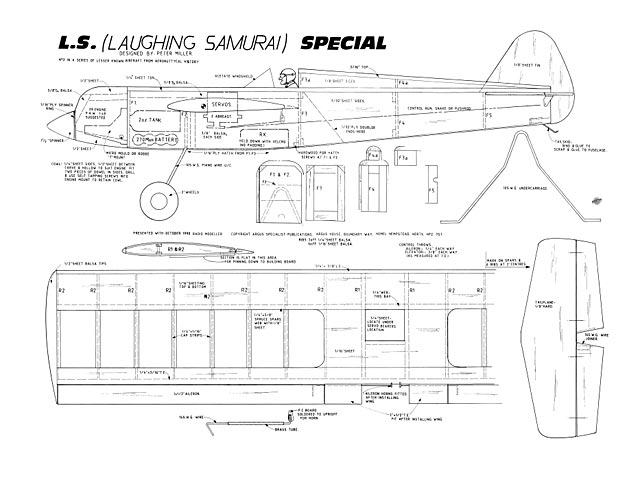 The L.S. (Laughing Samurai) Special - Peter Miller's second pseudo-scale model from 'aeronuttycal history' (#1 TRi-VI-Al-Pursuit, #3 Tequila Sunrise and #4 American Dragon are already on OZ), a superb exercise in adding bags of character to a basically simple design through some simple touches (like the fully cowled engine). From October 1990 Radio Modeller, I'm not sure Peter's article would be entirely PC today...

Quote: "History of full-size 'LS Special' makes unbelievable reading (letters to Peter M, not RM, thank you)! That apart, model itself is entirely genuine and a super little performer on one and a half cos of power - or more, if you have the nerve for it! Build a few in your club for a spot of low-cost fun racing,

For some reason the great. American air races of the '30s did not attract much foreign participation. The French entry in 1936 is well known; Detroyat in his Caudron came over and proceeded to wipe the floor with the home team. This aircraft is well documented and arguments still rage over it. Much less is known about the Japanese incursion into American racing in 1932; the story has been difficult to piece together and many of the facts cannot be confirmed but it does make incredible reading.

Tapemeasure research: The first Thompson Trophy race in 1929 proved to be a very unpleasant surprise for the Army Air Force. Up until that time modified military aircraft had dominated the big races but now a civilian built Travelair Mystery Ship left them all far behind. This sounded the death knell for military participation in air racing.

The news of these events caused a considerable amount of rethinking in Japan, especially at the Department of Aircraft Design, Drain Clearance and Ditch Digging. Up until this time all efforts had been aimed at gaining knowledge of American military aircraft but now it was realised that a study of the racing aircraft could be more profitable.

Professor Kuchikuchi assembled his design team and equipped them with the latest design equipment, ie tape measures, rulers, pencils and paper and, most important of all, cameras, and they set off for the National Air Races where they measured and photographed every single racer.

The design that they produced looks rather like a mixture of parts from half a dozen different racers. Mid wing, single leg u/c which was retractable. The structure was wood and steel with plywood and fabric covering. The engine was an experimental aircooled eight litre (549 cu in) V8 with four valves per cylinder of quite extraordinary performance although no figures have ever been released...

The model: There are no known drawings or photos of the LS Special and the model was based on a tinplate toy and a verbal description by Akita Shito's maiden aunt who volunteered as a Kamikaze pilot in the war and flew 17 missions.

Fuselage: Construction is very simple being basically a box with a 1/4 sheet top and a simple headrest and fairing. Build the basic fuselage sides and formers and then install the wing temporarily, making sure that everything fits and that there is room for the controls. Remove the wing and fit the fuselage top and shape this then fit the wing permanently and fit the tail surfaces. The aileron horns are fitted after installing the wing and are covered by the small trailing edge sections.

The wing: The wing section has a flat bottom behind the rear spar which makes pinning down to the board easier. Mark all the rib positions on the spars and lower trailing edge sheet and pin the lower leading edge sheet, lower spar and lower TE sheet down and glue the ribs in position. Use a length of TE stock to raise the LE sheet to match the ribs.

When this assembly is dry, fit the top spar, TE spar and leave to dry. Next fit the top LE sheet and TE sheet and when the glue is dry add the leading edge..." 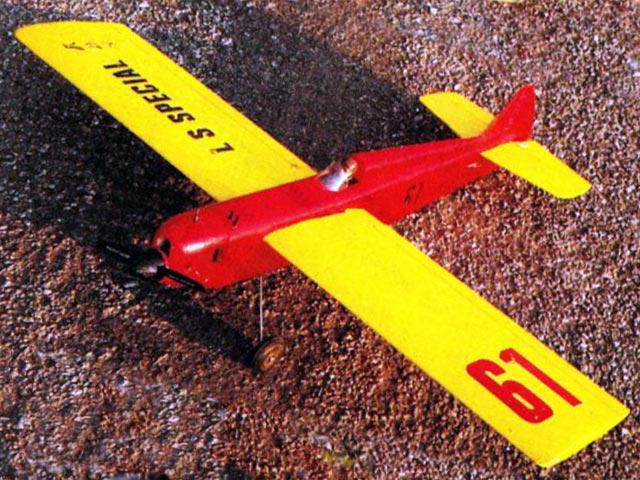