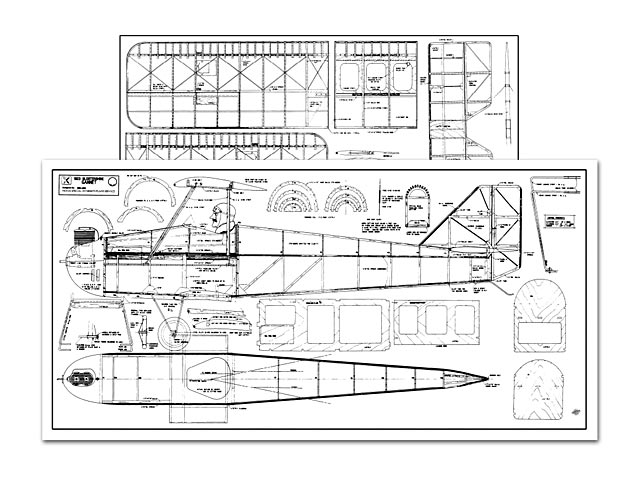 Quote: "Plan Feature. The GAC Gannet. Don Luck has designed a large scale model that won't break the bank and will fit into the family motor.

One of the unluckiest aircraft designed and entered for the 1923 Daily Mail light aircraft trials at Lympne was the Gloucestershire Gannet (the Gloucestershire Aircraft Company was shortened to Gloster in 1926). It was designed by HP Folland (responsible for the SE5 and Gladiator etc) and was a diminutive 18 feet span biplane planned around an experimental engine, a 750 cc Carden inline twin air-cooled two stroke. Unfortunately this engine proved unreliable due to overheating and oil system failure, and the Gannet was consequently knocked out of the Lympne trails. It was subsequently re-engined with a 650 cc V-twin Blackburn Tomtit giving a maximum speed of 72 mph.

The Gannet is notable for the exposed vertical twin cylinder engine, ideal for hiding the model engine and, with the dummy engine constructed of ABS plates and 1/4 in spacers, would provide adequate cooling. Another feature was the very small size of the wheels; if the scale were too small the ground handling on grass could be a problem. The choice of proprietary model aircraft wheels was limited, but the local DIY shop stocked 4 in plastic (shopping trolley?) wheels, which when retyred and dressed up looked the part. This then dictated the scale of 10/33 which equated to 64 in wingspan, 60 in LOA, 22 in height and an 11 in chord. With a weight target of 9-11 lbs, it was considered that a good 0.61 two stroke (in keeping with the original engine concept) would be quite adequate, with a wing loading of around 16 oz/sq ft.

Over recent years I have been moving away from 100% balsa construction toward more 'full-size' build using spruce and ply. I have discovered that using smaller sizes and the thinnest plywood's yields an extremely strong structure with no weight penalty compared to balsa. Having a mini circular saw enabled me to produce the optimum size/length of spruce spars and longerons, and at a lower cost than balsa. The structural design reflects this, but of course dimensions could be changed to suit 'shop' strip and even balsa could be utilised if wished, ie wing ribs could just as easily be 1/16 or 3/32 balsa, but thin ply ribs really look good, and can be cut out with scissors. It will be noted also that the Gannet has ailerons fitted top and bottom, and this can be accommodated in the model by installing servos in the wings operating the ailerons by direct linkage, but as the total aileron area seemed enormous, I decided to fit ailerons only on the bottom wing, the top wing ailerons are dummies. However the purist can easily arrange for all four ailerons to work, by closed loop perhaps, or four separate servos (mini of course).

The engine fitted was an old OS FSR 0 61 (old but low engine hours) with a 12 x 6 in propeller. As an experiment, and in order to locate the engine well forward, the metal engine mount is fixed to the bulkhead with stand off rubber mounts, it was hoped this would also reduce resonance noise. The silencer via a downpipe manifold was fixed to the engine mount.

In order to maintain a 'clean nose' with no protrusions another 'first' for me was a remote needle valve fitted behind the dummy engine. Yet another 'first' was making a GRP engine cowl, a plug from blue foam produced the female mould but three cowls were laid up until one of correct thickness was produced. The final 'first' was the covering method, tissue lightly doped followed by nylon fixed with wallpaper paste. the only unexpected happening of note was the tautening effect. Each model I build, I try something different, I think its called a learning curve!

Construction: Fuselage construction follows very orthodox lines, with this type of construction it is essential to get accurate fits between longerons and spacers and to use a glue that penetrates well. A good, fresh PVA or aliphatic is best for this. Why not cut spacers for both sides in pairs to help produce identical sides. It may be necessary to 'crack-bend' or part saw through the lower longerons at the lower wing root position but there will not be a weak point here as the gussets and spacers provide reinforcement. The fuselage base, F1 and F5a can be glued together now and then the fit of the sides tried.

Cut the rear cross spacers in pairs ready for assembling the fuselage. Have several large squares or pieces of ply, hardboard or even cardboard cut to accurate squares, available plus plenty of scraps of masking tape, clamps etc. The accuracy of the rear fuselage depends on it all being held firmly whilst the glue dries. Glue the fuselage sides to the former assembly on by one. a moderately fast epoxy is ideal for this. Weigh down, hold with pins or clamp the assembly over the plan and prepare to draw in the rear of the fuselage. Using your squares, pre-cut spacers, masking tape pins and clamps draw in the rear end station by station checking step by step that the sides are following the line of the plan, the last step being to ensure that the rudder post area is truly vertical and central over the plan centre line..." 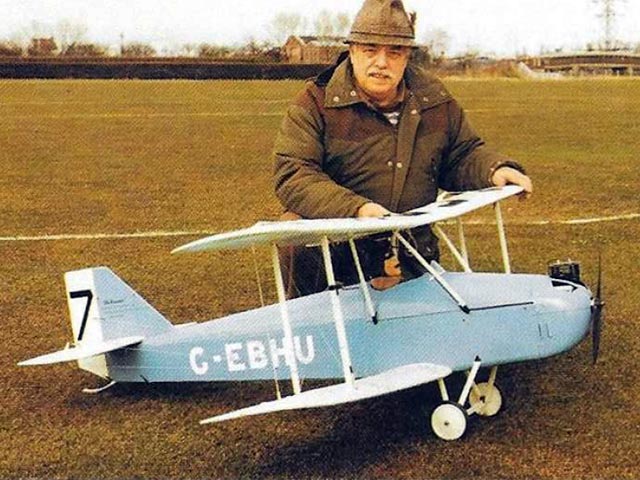